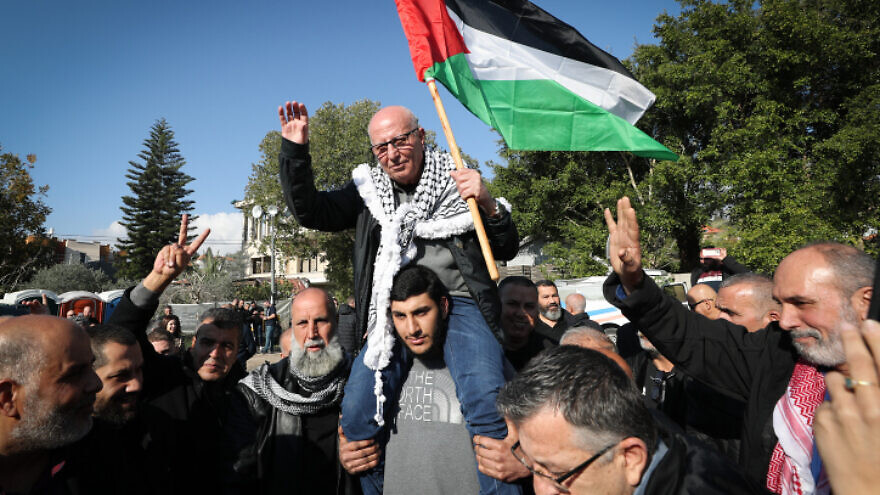 Arab-Israeli terrorist Karim Younis, who was released after 40 years in an Israeli prison for the kidnap and murder of an IDF soldier in 1983, is treated to a hero's welcome in his hometown near Haifa. Jan. 5, 2023. Photo by Jamal Awad/Flash90.
Spread the word.
Help JNS grow!
Share now:

Maher and his cousin Karim Younis, both of whom are Israeli citizens, murdered Israel Defense Forces Cpl. Avraham Bromberg in the Golan Heights in 1980. Both Karim and Maher Younis were sentenced to life in prison in 1983, but in 2012 then-Israeli President Shimon Peres commuted their terms to 40 years.

Earlier this month, Karim received a hero’s welcome in the northern village of ’Ara upon his release from jail. He then visited his mother’s grave, stating, “I am prepared to sacrifice another 40 years for the freedom of our people. My consolation is that today prisoners are united against the barbarity of the occupation.”

Ben-Gvir on Tuesday called Maher Younis’s impending release “a test of our sovereignty,” adding, “We must in no way allow the serious offenses of encouraging and supporting terrorism anywhere in the State of Israel.”

In a statement, Israel Police Commissioner Yaakov Shabtai vowed to prevent a repeat.

“We will not allow the law to be violated during the release of the terrorist [Maher Younis]. I spoke a few days ago with a relative of the late Avraham Bromberg and assured him that we will not allow any [public displays of] support or sympathy [for Maher],” said Shabtai.

A large police presence has been deployed to ‘Ara ahead of Maher Younis’s release, which is expected as early as Thursday, according to Israeli media reports. His family was also told to not set up a visitor’s tent in their house, said the reports.

After the festivities for Karim Younis, Ben-Gvir ordered Shabtai to open a probe into what he views as internal failures.

“[These] are celebrations of incitement and explicit support for terrorism, and it’s unacceptable for such events to happen in our home. The State of Israel has no place for [them],” Ben-Gvir said at the time.

He also directed police to enforce an existing ban on the flying of Palestinian flags in solidarity with terrorist groups. The compound in which Karim’s homecoming was held was decorated with Palestinian flags, and Younis himself also carried one.

Flying the Palestinian flag in public is not on its own a criminal offense in Israel. However, police have the authority to take them down if they are displayed in solidarity or sympathy with a terror group, or if there is a high probability that leaving the flag up will result in a public disturbance.

Meanwhile, the Israeli Defense Ministry has since revoked the entry permits of three senior Palestinian Authority officials who participated in the homecoming.