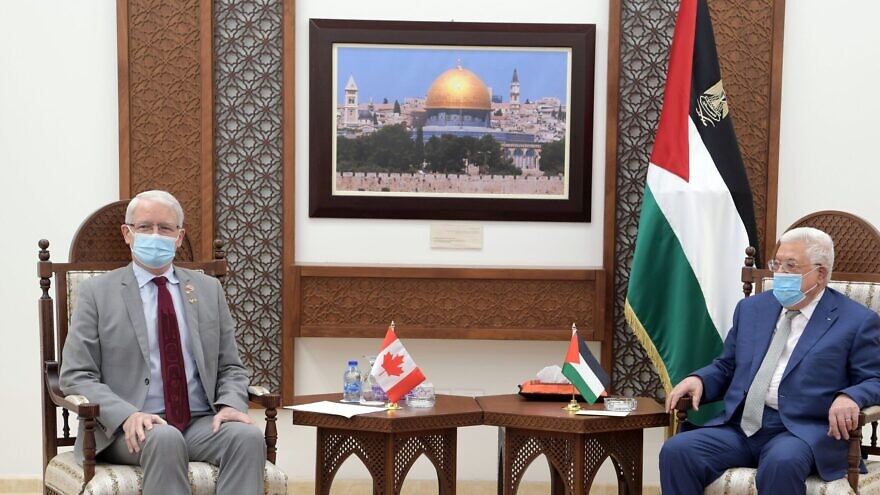 Speaking during a meeting in Ramallah with Canadian Foreign Minister Marc Garneau, Abbas also expressed his appreciation for Canada’s “positions in support of the self-determination of the Palestinian people.”

Abbas thanked Garneau for Canada’s “opposition to the expansion of Israeli colonial settlements, rejection of the expulsions of Palestinians from East Jerusalem and recurrent calls for respecting the historic status quo at the holy sites in Jerusalem,” according to the Palestinian WAFA news agency. He also stressed the need to end the Israeli “occupation.”

Garneau, who was in Ramallah as part of a five-day Middle East trip that took him to Jordan, Israel and the West Bank, said Canada’s long-held position is that continued settlement expansion, house demolitions and evictions are a serious obstacle to peace and that those activities must cease, according to a statement put out by the Canadian Foreign Ministry.

“Canada reaffirms its longstanding support for the creation of a Palestinian state living side by side with Israel. We continue to believe that a two-state solution is the path to a just and lasting peace between Palestinians and Israelis,” said Garneau.

During his Israel visit, Garneau also met with P.A. Prime Minister Mohammad Shtayyeh and Foreign Minister Riad al-Maliki. During these meetings, Garneau expressed Canada’s firm support for the Palestinian people, its right to self-determination and peace in the Middle East, according to the Canadian Foreign Ministry.

Meeting with Palestinian community leaders, Garneau spoke of the importance of human rights and freedom of expression. He called for accountability and transparency regarding the death of Nizar Banat, an anti-Abbas activist who was killed by members of Abbas’s security forces on June 24. His death has led to several days of Palestinian protests against the P.A.