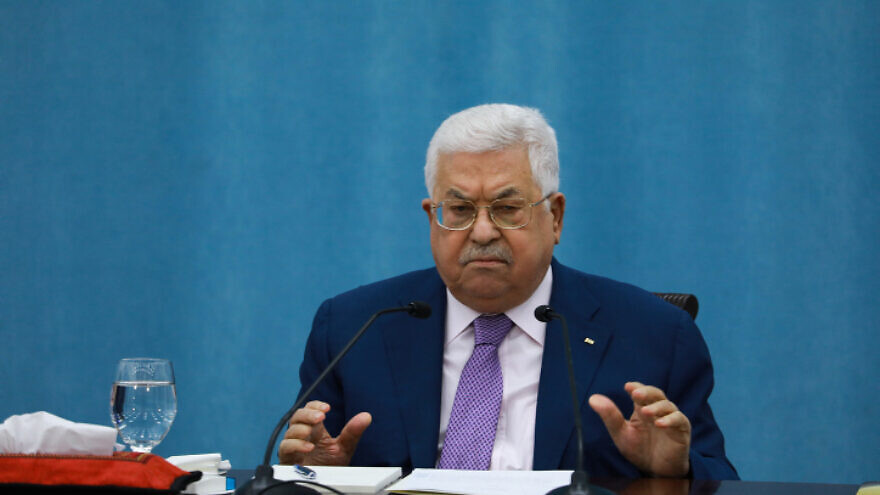 Palestinian Authority leader Mahmoud Abbas delivers a speech regarding the coronavirus outbreak, at P.A. headquarters in the West Bank city of Ramallah, on May 5, 2020. Photo by Flash90.
Spread the word.
Help JNS grow!
Share now:

(May 20, 2020 / Israel Hayom) Palestinian Authority leader Mahmoud Abbas said on Tuesday that he was terminating all agreements with Israel and the United States over Israeli Prime Minister Benjamin Netanyahu’s plan to extend Israeli law to parts of Judea and Samaria under the aegis of the Trump peace plan.

In a speech to Palestinian leaders in Ramallah, Abbas warned that Israel would have to assume responsibility for the civilian Palestinian population, currently exceeding 2 million people.

“The Palestine Liberation Organization and the State of Palestine are absolved, as of today, of all the agreements and understandings with the American and Israeli governments and of all the obligations based on these understandings and agreements, including the security ones,” said Abbas, according to the P.A.’s official Wafa news agency.

“The Israeli occupation authority, as of today, has to shoulder all responsibilities and obligations in front of the international community as an occupying power over the territory of the occupied state of Palestine, with all its consequences and repercussions based on international law and international humanitarian law,” he added.

In his speech, Abbas claimed that Netanyahu’s remarks Monday concerning applying Israeli law to settlements and the Jordan Valley meant Israel had “annulled” the 1993 Oslo Accords, which established the P.A.

With regard to the role of the U.S. administration, Abbas said, “We hold the American administration fully responsible for the oppression befalling the Palestinian people and we consider it a primary partner with the Israeli occupation government in all its aggression.”

Top Ramallah officials told Israel Hayom that while serious, at this point the Palestinian Authority’s president’s assertion is mostly declarative.

The current directive from Abbas’s office, they said, is to minimize security coordination with Israel, but that in and of itself is not new, as he often makes such decrees. The P.A. officials said the statement was most likely made in favor of incoming Israeli Defense Minister Benny Gantz.

“Abu Mazen [Abbas] is trying to bring Gantz to the negotiating table. There is no intention here to dismantle the Palestinian Authority and restore Israeli control [over the West Bank]. That’s not a practical move. We also don’t fully understand the meaning of his announcement,” said one Palestinian official.