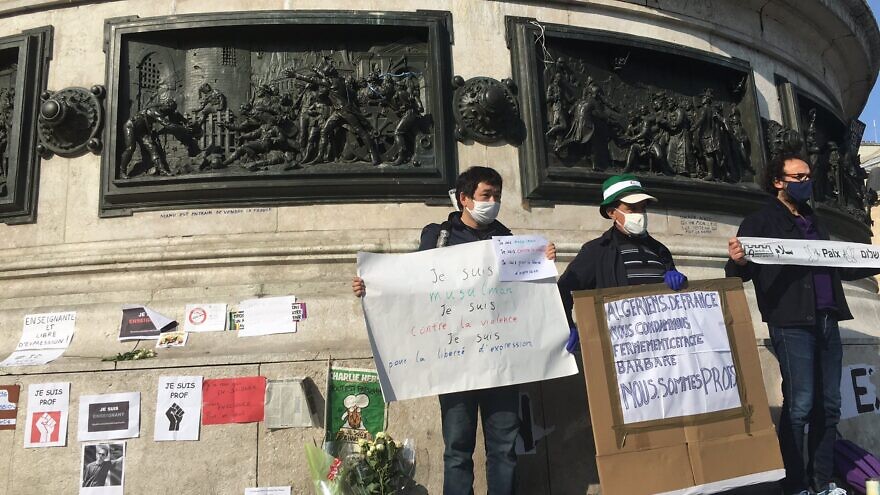 Protesters wave banners reading "We are Prof" in solidarity with murdered teacher Samuel Paty, who was beheaded on Oct. 15, 2020 in Paris for showing a cartoon of the prophet Muhammad in a course on free speech. Source: Twitter/Sophie Sassi.
Spread the word.
Help JNS grow!
Share now:

(October 19, 2020 / JNS) French police on Monday raided the offices of Islamic organizations and detained foreign nationals suspected of extremist religious beliefs, following the beheading on Friday of a history teacher at a school in an upscale Paris suburb, Reuters reported.

According to the report, Samuel Paty, 47, was decapitated in broad daylight outside his school on Oct. 16 by 18-year-old Chechen refugee Abdoullakh Abouyezidovitch A. Police who arrived on the scene shot and killed the assailant who—according to witness testimonies—shouted “Allahu Akbar” [“God is great” in Arabic] and tried to attack the officers.

France 24 reported that witnesses said the perpetrator was at the school on Friday afternoon, asking students where he could find Paty.

Police on Saturday detained 10 people in connection with the attack, the report said.

Among these was the father of a 13-year-old student of Paty’s, who had complained about the teacher’s use of caricatures of the Prophet Mohammad in a class on freedom of expression.

Another detainee, according to the report, was Moroccan-born Abdelhakim Sefriuoi, who police said used social media to campaign against Paty. One source in the French judicial system told Reuters that Sefriuoi had engaged in similar campaigns against “Islamophobia” in the past, and security sources confirmed that he has been on the French intelligence watchlist for more than 15 years.

Interior Minister Gerald Darmanin said that calls for action against Paty from the above two suspects led to his killing, as they served as a fatwa [Islamic degree] against him.

Meanwhile, thousands of people held protest rallies across France on Sunday against the violent incident, which served as a reminder of the 2015 killing spree on employees of the Charlie Hebdo satirical newspaper for publishing Muhammad cartoons, France 24 reported.

The office of French President Emmanuel Macron announced that a national tribute would be held for Paty on Wednesday, according to the report.