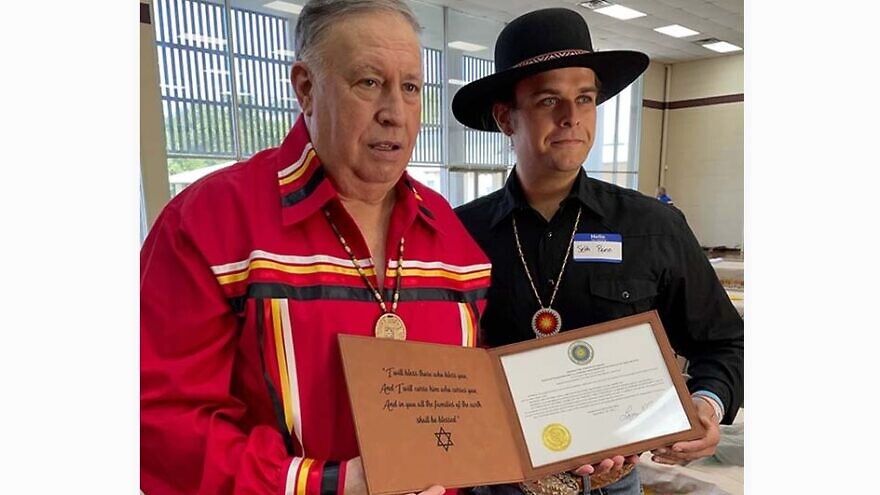 (October 12, 2021 / Israel InSight) The Northeast Alabama Cherokee held a ceremony on Sept. 25 in Guntersville, Ala., to establish a relationship with Israel. There, the tribe presented a resolution, unanimously passed by the Tribal Council, recognizing the “sovereign Jewish nation” of Israel, with Jerusalem as its “eternal undivided capital.”

“We vow our full support in the pursuit of the peace of Jerusalem and the Nation of Israel by whichever means may be necessary,” it said.

The event, centered around a potluck lunch, included expressions of solidarity with the Jewish community and comparisons to the experiences of native tribes in North America.

Chief Larry Smith began his remarks by noting that “if there is a people that can understand how the Jews feel, it’s the Cherokee,” which received an “Amen” from the audience.

“We have chosen to identify with a people as a people,” he added.

Seth Penn, the deputy representative of the Red Wind Tribal District, said “the nation of Israel has a lot in common with the Cherokee people—they have been removed from their homeland, came back and have to fight for their homeland.”

“Some historians even argue we can find our DNA roots in Israel,” he said. “I‘m not saying that’s true.”

Smith echoed that, saying “are we the Ten Lost Tribes of Israel? Debatable.”

The first white settler in what is now Montgomery was Jewish, Abraham Mordecai. He traded with the local tribes and was so convinced of their Jewish origin that he kept addressing them in Hebrew, hoping to receive a similar response.

Smith said Penn brought the idea of the resolution to him about four months ago. While he was receptive to the idea, the fact that Penn “was getting a great response from the Israeli side” made him more determined to do it.

Laura King, the co-founder of the Alabama-Israel Task Force and former national chair of the Jewish Federations of North America’s Network of small Jewish communities, made a presentation on behalf of the Israeli Consulate in Atlanta.

King expressed “deep apologies” from Consul General Anat Sultan-Dadon for not being able to attend. “She really wanted to be here today, it was really important to her,” but the event being on Shabbat in the middle of Sukkot made it impossible.

In a letter to the tribe, Sultan-Dadon wrote: “Your friendship and support, beautifully expressed through this proclamation from the Cherokee Tribe of Northeast Alabama, are invaluable and greatly appreciated.”

She added that “like the Cherokee Tribe, the Jewish people have an undeniable and unbreakable bond to our native land. During centuries of dispersion, the Jewish people never severed nor forgot its bond with our historic homeland.”

Some Palestinian activist groups have tried to target native tribes for support with a narrative about being displaced from their lands.

Smith said it is a tremendous honor to have recognition from Israel, “when we can’t even get other Cherokees to recognize us.” He added that only the State of Alabama, which declared nine tribes in a 1984 legislative act, recognizes them.

He added that most people don’t realize that the tribes benefited greatly from Martin Luther King Jr. and the civil rights battles, because the Civil Rights Act included provisions for native tribes.

Before then, “you weren’t allowed to go further than eighth grade,” and in Louisiana, for example, the first Native American to graduate high school did so in 1967. “It has been a struggle, and it is still a struggle.”

In comments that the Jewish community can identify with, Smith said he often gets requests from people who want to be identified as Cherokee and asks them, “Do you really know what you are asking?” One may have an identity card in their pocket, but “your name is on a roll … it hasn’t always been popular to identify with a certain people, with your name on their roll.”

He noted that at one point, the United States didn’t want the Cherokee to be around, and “the ones they couldn’t kill, they were going to assimilate.”

Smith said while the Jews had Hitler, “we had Andrew Jackson. Hitler admitted he read Andrew Jackson’s book on how to get rid” of the native tribes. He added, “I firmly believe [Jackson] planned to kill them all, and the political atmosphere didn’t let him.”

Penn said the message of “declaring our sovereignty as a tribal nation in support of another sovereign nation” is “very significant, even more so than we may realize.” 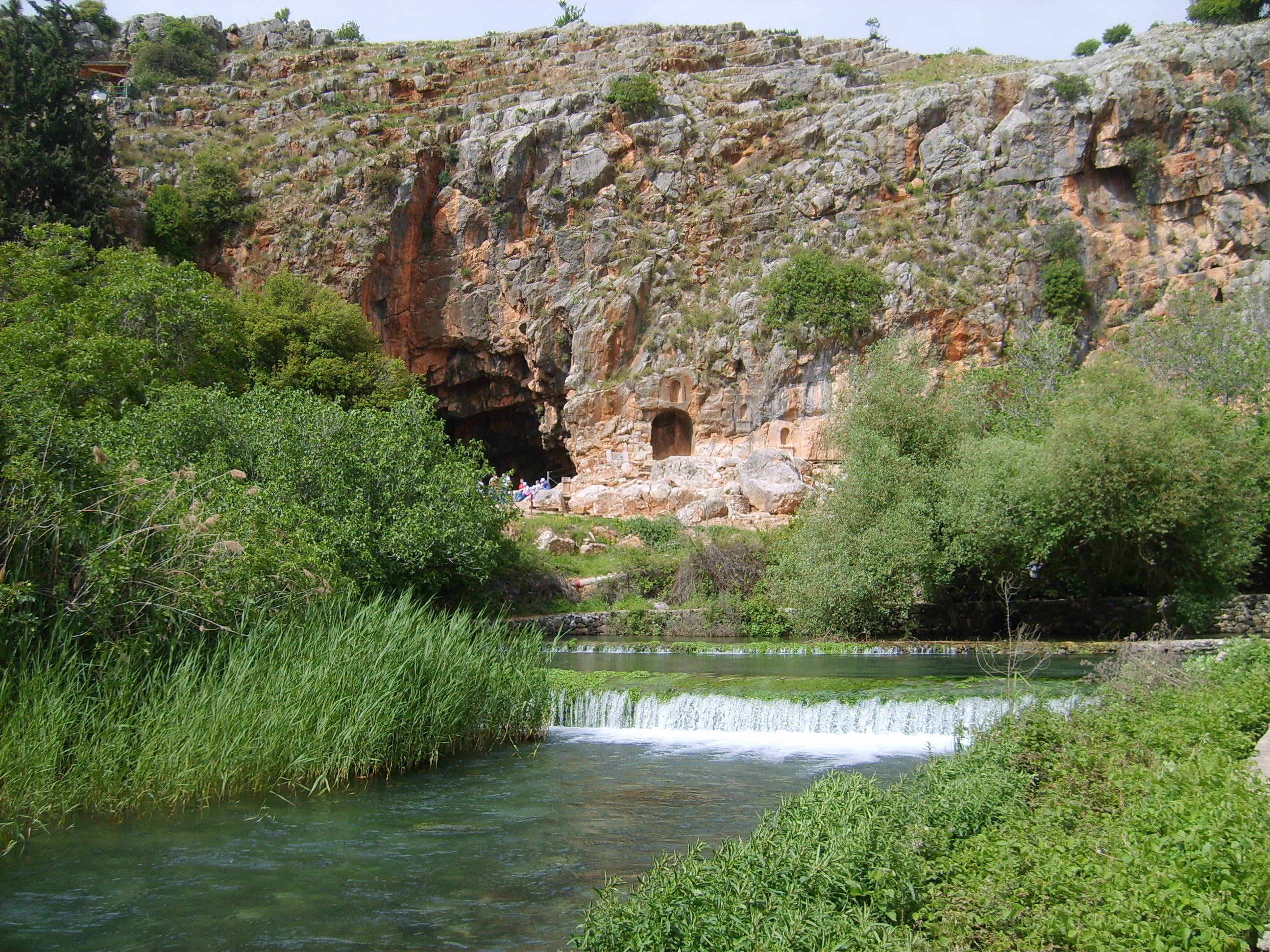 Spring of the Banias River, one of the main tributaries of the Jordan River. In the background Pan’s cave, in which the river originated in ancient times until an earthquake blocked it. Credit: Wikimedia Commons.

John Buhler, AITF co-founder, called it “a deeply meaningful gesture … we live in a time when so many voices remain silent, but the Cherokee tribe has risen to acknowledge the truth” about Jerusalem and Israel.

He said Israel and the Cherokee are both “indigenous people who have a very deep sense of a God-given responsibility to steward sacred lands.”

Two years ago, Buhler was part of a 50-person trip to Israel from Alabama; the group visited the Jordan River at the spot where Joshua brought the nation into the land. He presented Smith with a small jar of dirt from that site.

As “honored guests” representing the Jewish community, King and this reporter were presented with native blankets and necklaces.

Citing Genesis 12:3, which was quoted on the inside of the resolution’s presentation folder, Smith said the Jews “are still God’s people. If you are an evangelical Christian or a Chassidic Jew, you have to understand God entered a covenant with Abraham, and when God enters a covenant, it can’t be broken.”

There’s no denying that God “has his hand on the country of Israel,” as “any other country that size would have ceased to exist 60 years ago.”

Pastor Patrick Penn of the Dwelling Place in Huntsville and the father of Seth Penn, noted that as a Zoom call was taking place among tribal leaders to discuss the resolution, Alabama Chief Justice Tom Parker was in Oxford at a gathering of First Nations. As chief justice, the pastor said Parker “stood up and repented to the First Nation people for the decisions that were made” in the past.

He said, “I don’t believe there are such things as coincidences; I think things are guided by Providence.” Parker’s declaration, he added, was related to the discussion of support for Israel the Cherokee was having at the exact same time.

Adding to the web of ties with Israel, Parker’s wedding was held in Israel, and his wife, Dottie, sang “Hatikvah” at the inauguration of Alabama Gov. Fob James in 1995.

Seth Penn said he hopes this type of recognition spreads to other tribes, as he found almost nothing to compare with when researching online. Some Palestinian activist groups have tried to target native tribes for support with a narrative about being displaced from their lands.

In 2008, the Coushatta Tribe of Louisiana signed a friendship agreement with Israel. They participated in a trade mission to Israel in 2011, signing an agreement to become the exclusive U.S. distributor for Israeli startup Aya Natural’s products. Recently, they have become a sponsor of Jewish Federation of Greater New Orleans events.

The Coushatta, who were forced out of what became Georgia and Alabama, operate a casino resort in Kinder, La.

Smith said the resolution is not the end of a process, but the beginning, and he hopes to deepen the relationship. “We are going to keep this going,” he said. “We laid the groundwork to a great friendship between these two countries.”

He added, “I hope this will grow into something where we can work with members of the Jewish community who would like to be with us, celebrate with us and have a good time.”