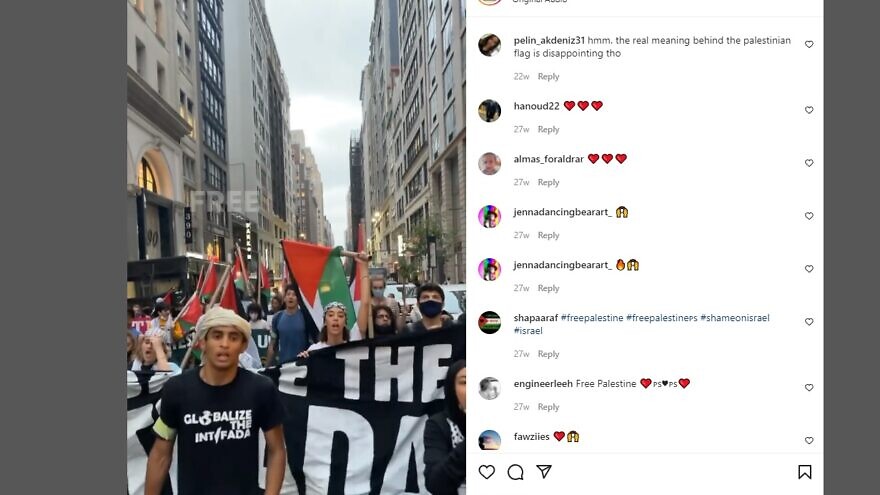 A screenshot of a Within Our Lifetime rally in New York City calling for “globalizing the intifada.” Source: Screenshot.
Spread the word.
Help JNS grow!
Share now:

(March 31, 2022 / JNS) Amid the ongoing terror wave that has killed nearly a dozen Israelis in the past week, a pro-BDS group in New York City held a rally in front of the offices of the Friends of the Israel Defense Forces (FIDF) on Wednesday urging to “globalize the intifada.”

During the event, the leader of the group Nerdeen Kiswani, who heads the group Within Our Lifetime (WOL), led the chant ­from New York to Palestine, globalize the intifada,” in what can be perceived as a call to conduct acts of terror against Israelis or Jews in other places around the world.

Attendees there chanted: “There is only one solution, intifada revolution” and “whose streets? Our streets!”

WOL also handed out a map to participants with 10 specific addresses of Jewish and Zionist NGOs and foundations across New York City. 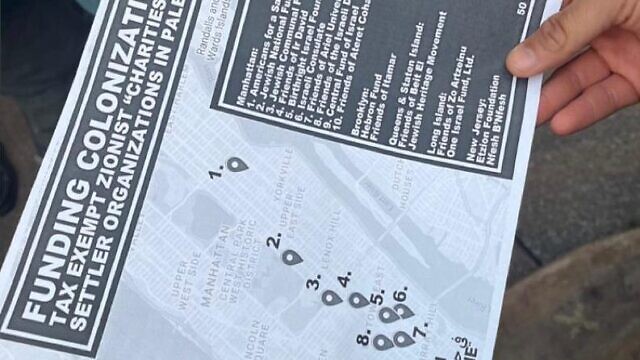 WOL handed out a map to participants with 10 specific addresses of Jewish and Zionist NGOs and foundations across New York City.

In addition to Palestinian flags, at least three attendees were flying the flag of the Israel-designated terror group Samidoun, which is affiliated with the Popular Front for the Liberation of Palestine (PFLP)—a U.S.-designated foreign terror group.

Due to WOL’s extremist activities, pro-Israel groups have called upon Donorbox and Google Pay to block their platforms from providing fundraising services to this anti-Israel group.

However, no such actions have been taken as of yet.