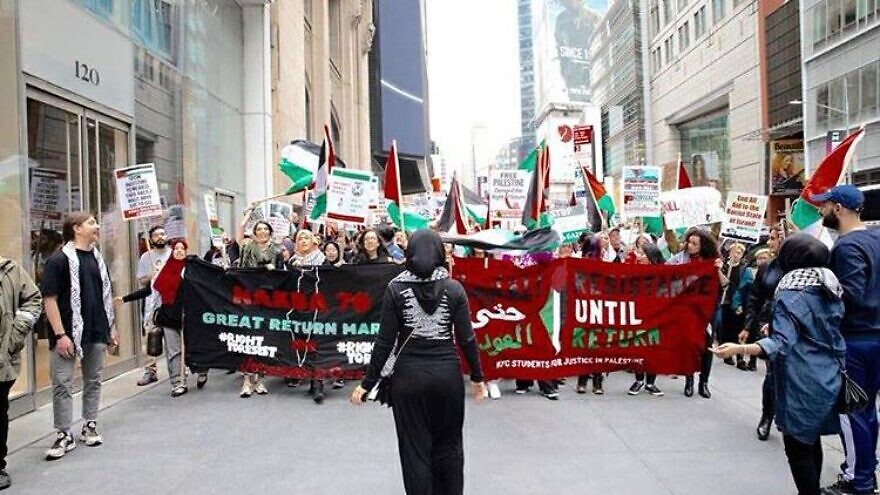 (March 14, 2022 / JNS) Within Our Lifetime (WOL), a New York City-based anti-Israel group that supports the Palestinian right of return “from the Jordan River to the Mediterranean Sea,” resistance to the “Zionist occupation by any means necessary” and “the abolition of Zionism,” said that it had been banned from Instagram last week, apparently after it posted a collage featuring prominent Palestinian terrorists.

The collage—posted March 8 and featuring terrorist women—was WOL’s idea of celebrating International Women’s Day. Among those depicted in the collage were Rasmea Odeh, who was convicted of two terrorist bombings in Jerusalem in 1969, one of which killed two Israeli agriculture students in Jerusalem; and Leila Khaled, part of a Palestinian terror group that hijacked a TWA flight that same year. The ban came the next day.

StopAntisemitism.com, a watchdog group that exposes groups and individuals inciting against Jews and the State of Israel, has since 2020 advocated for WOL’s ban from Instagram given the group’s ongoing support for terrorists. WOL has 57,000 followers on Instagram.

Although Meta is the parent company of both Instagram and Facebook, Rez explained that Facebook and Instagram need to be approached separately as there’s a lack of comprehensive oversight. “Often, organizations like us have to get in the middle and say, ‘Hey, if you blocked ‘A,’ could you please block ‘B?’ ”

‘We fully monitor across all platforms’

WOL is led by Nerdeen Kiswani, a New York City law student. An online poll by StopAntisemitism.org in 2020 named her “Antisemite of the Year.”

Kiswani became infamous for a TikTok video she uploaded in which she holds a lighter close to a man’s sweatshirt bearing an Israel Defense Forces’ emblem and says (offscreen), “I hate your shirt, I’m gonna set it on fire. I’m serious.”

The failure of the City University of New York School of Law (CUNY Law) to properly take action against Kiswani after her TikTok video led the Zionist Organization of America to file a complaint under Title VI of the Civil Rights Act against the school.

Kiswani also reportedly harassed a Jewish student to the point that the student quit law school.

“Nerdeen, essentially, was so radical that she stepped down or was ‘asked’ to leave Students for Justice in Palestine in New York,” said Rez.

“She ended up forming Within Our Lifetime around 2018. This organization in particular attracts the most radical individuals. It’s an extremely anti-Semitic organization. It publicly supports U.S.-designated terror organizations such as the Popular Front for the Liberation of Palestine (PFLP),” said Rez.

StopAntisemitism.org also successfully lobbied Donorbox, the payment system used by WOL to raise funds, to stop allowing the group to use its system. WOL has since switched to Google Pay. “We’ve asked Google to cease its relationship with them, but they have not,” said Rez.

She noted that dealing with anti-Semitic groups on social media requires constant vigilance since just because a group is banned doesn’t mean it will stay banned. “It’s not that difficult to make new accounts. I always say it’s very comparable to a whack-a-mole game, but we fully monitor across all platforms—their secondary, tertiary accounts and so forth—when they pop up,” said Rez.

“They [WOL] are asking their followers to petition that they be brought back,” she said. “We hope they will not be.”