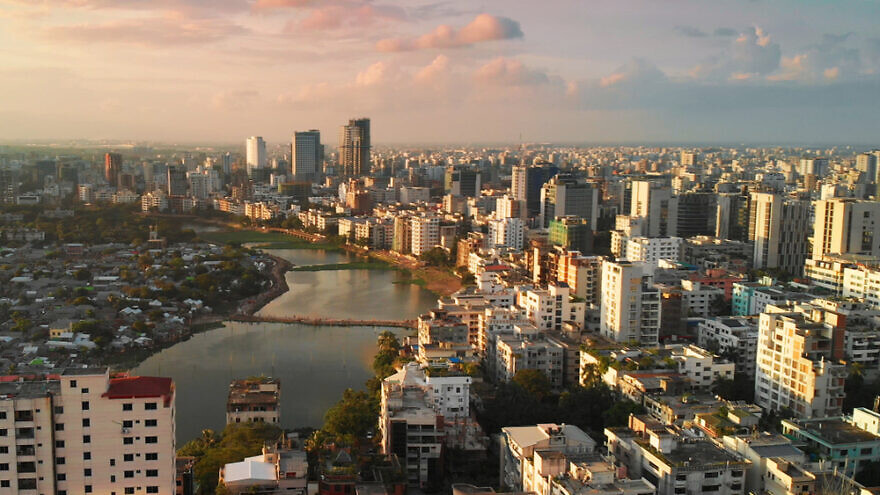 (December 20, 2021 / JNS) Since the signing of the Abraham Accords, there has been a remarkable shift in Israel’s relations with the Muslim world. New reports have emerged of the possibility of further breakthroughs in diplomatic ties with former foes like Saudi Arabia, the birthplace of Islam and Indonesia, the world’s largest Muslim country.

Another large Muslim country that observers see the possibility of normalizing ties with is Bangladesh. While Bangladesh and Israel have no formal ties, there have been reports of unofficial economic and military cooperation between the countries, and the Muslim country also dropped a key travel restriction to Israel earlier this year (though travel to Israel is still forbidden by law), fueling speculation that normalization may be on the horizon.

Economic and military cooperation is believed to be ongoing between the two countries, regardless of official diplomatic status. Multiple media reports indicate that Bangladesh has purchased Israeli military-grade technology, and the World Bank’s World Integrated Trade Solution (WITS) database showed that between 2010 and 2018, Israel imported products worth around $333.74 million that originated from Bangladesh. WITS data shows that Israeli exports eventually making their way to Bangladesh stood at $3.67 million between 2009 and 2015. No data is available after 2015 in the WITS system.

Despite the lack of ties today, Israel was an early supporter of Bangladesh during its war of independence from East Pakistan in the early 1970s and was one of the first nations to recognize independent Bangladesh. Nevertheless, the country’s original leaders shunned Israel in favor of PLO leader Yasser Arafat, who sided with Pakistan.

“In ’71, in the most difficult time of our lives, we received an offer from Israel for recognition. We appreciated the offer, we kindly told you, ‘Thank you so much, it is OK, our patron India is with us, the Soviet Union is with us.’ Our people don’t forget, though,” former Bangladesh foreign affairs minister and long-time diplomat, told JNS, sounding optimistic that diplomatic relations between Israel and Bangladesh could be on the horizon.

When Pakistan gained independence in 1947 from the United Kingdom, it was comprised of two Muslim-majority regions, East Pakistan (comprising modern-day Bangladesh) and West Pakistan (modern-day Pakistan). However, ethnic and linguistic differences between the two regions were immediate, with West Pakistan imposing political and economic control over East Pakistan, which eventually sparked an independence movement among the ethnic Bengalis in East Pakistan. Seeking to curb the Bengali independence movement, Pakistani forces launched Operation Searchlight sought to eliminate all Bengali opposition, political and military, which lead to the 1971 Bangladesh genocide and eventually the War of Liberation culminating in a Pakistani surrender on Dec. 16, 1971, and the independence of Bangladesh.

Nevertheless, Bangladesh officials insist publicly that the country will not normalize relations with Israel until there is a just solution to the Israel-Palestinian conflict. It’s a position some see as perverse given the story of Bangladesh’s liberation.

“Yasser Arafat [then the leader of the Palestine Liberation Organization] was comparing our war of liberation as a conflict between Israel and Palestine and branding our freedom fighters as terrorists, while Israel was supporting us. We should have had diplomatic relations with Israel from the very day Israel extended its recognition to Bangladesh,” said Choudhury.

Choudhury faced charges of sedition, treason, blasphemy and espionage in part for attempting to attend a conference of the Hebrew Writers’ Association in Tel Aviv in 2004. He was beaten, jailed in solitary confinement for 17 months and denied medical treatment, before being released on bail with the help of an American congressman, though the charges against him are still pending.

Choudhury noted that Bangladesh’s first foreign minister, Khondaker Mostaq Ahmad, was responsible for turning Israel away. Ahmad later took part in a conspiracy leading to the assassination of Bangladesh’s first president, Sheikh Mujibur Rahman, in 1975 with Ahmad taking immediately taking control of the government and declaring himself president.

The lack of official diplomatic relations between the countries does not appear to be borne out of overt anti-Semitism, though it certainly exists in Bangladesh society. However, one of Bangladesh’s most revered war heroes was Jewish. Lt. Gen. Jack Farj Rafael Jacob, an officer in the Indian army, played a crucial role in negotiating the surrender of Pakistan in Dhaka during the Bangladesh Liberation War in 1971.

His death was publicly mourned by high-level officials, and he was previously bestowed with the “Friend of Liberation War Honor” award. Louis Isadore Kahn, a Jewish Estonian-born American architect, designed Bangladesh’s National Assembly parliament building, looked at as an extraordinary example of modern architecture.

Bangladesh’s rapid development has not gone unnoticed by Israeli officials, who publicly welcomed the removal of Israel’s printed exclusion on Bangladesh passports and have openly called for warmer ties over the years. Bangladesh is experiencing a GDP growth of 7.9 percent, with a $409 billion economy, and its government structure is quite liberal. Women have led the country for nearly all of the last 20 years, and the current prime minister, parliament speaker and opposition leader are women.

Ilan Sztulman Starosta, head of Mission of the Israeli Consulate in Dubai, recently became the highest-ranking Israeli official to give an interview to a Bangladesh media outlet, telling the Weekly Blitz that, “Bangladesh could be a very important partner for us. Bangladesh has centers of innovation, a big population, resources, and [Bangladeshi] people understand that the next step in business is innovation as the old technologies are cold and spoiled and have a limited lifespan. We’re waiting for partnerships with Bangladeshi researchers, universities, companies, and I think that everybody in the region would benefit from this relationship,” intimating that mutual ally India could play a critical role in bringing Israel and Bangladesh together.