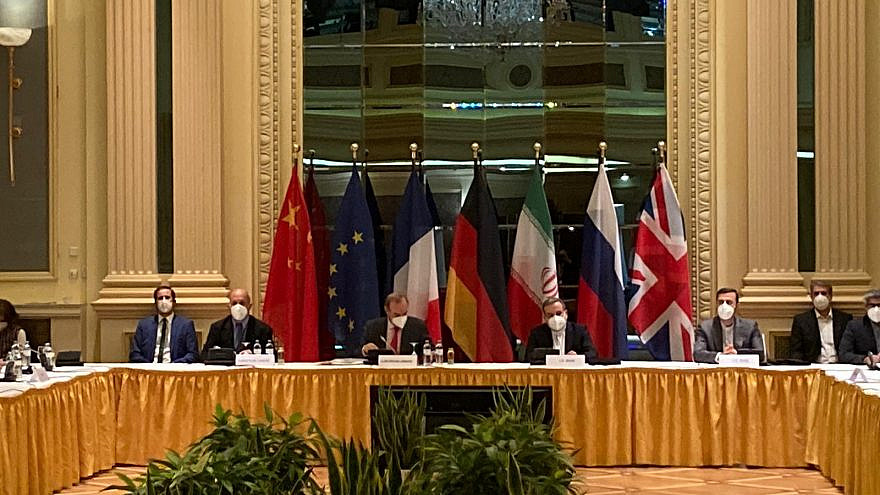 (March 10, 2022 / JNS) Experts with the Foundation for Defense of Democracies (FDD) think tank in Washington, D.C., agreed this week that information from negotiations in Vienna for the United States and Iran to re-enter into a nuclear deal indicate that an agreement announcement expected soon will signify a weaker deal than before, with America providing Iran with too many concessions.

In a Zoom discussion on Tuesday, Rich Goldberg, senior advisor at FDD, said a new accord would favor Iran and Russia, which is helping negotiate the deal as it also launched an internationally condemned war in Ukraine on Feb. 24.

Particularly concerning is that the prospective agreement is likely to include significant sanctions relief to Iran and allow it to keep its advanced centrifuges and stockpiles of highly enriched uranium.

Meanwhile, the deal is expected to retain the sunset provisions agreed to in the 2015 nuclear deal—the Joint Comprehensive Plan of Action (JCPOA)—that have already started expiring, with even more provisions ending in coming years.

The agreement would also not hold Iran accountable for its malicious actions and support of terrorism throughout the Middle East and its ongoing development of ballistic missiles.

“What we are seeing play out in Vienna is essentially a Russian-brokered agreement that will favor Iran, will favor Russia, and put the United States and our allies at a great disservice and risk to our national security,” said Goldberg. “What does Iran get in the deal so far that we know? It will obviously have access to more than $100 billion in sanctions relief. We understand that it will remove terrorism, missile and human-rights sanctions—and not just nuclear sanctions—going much further than we were told was allowed in the JCPOA.” 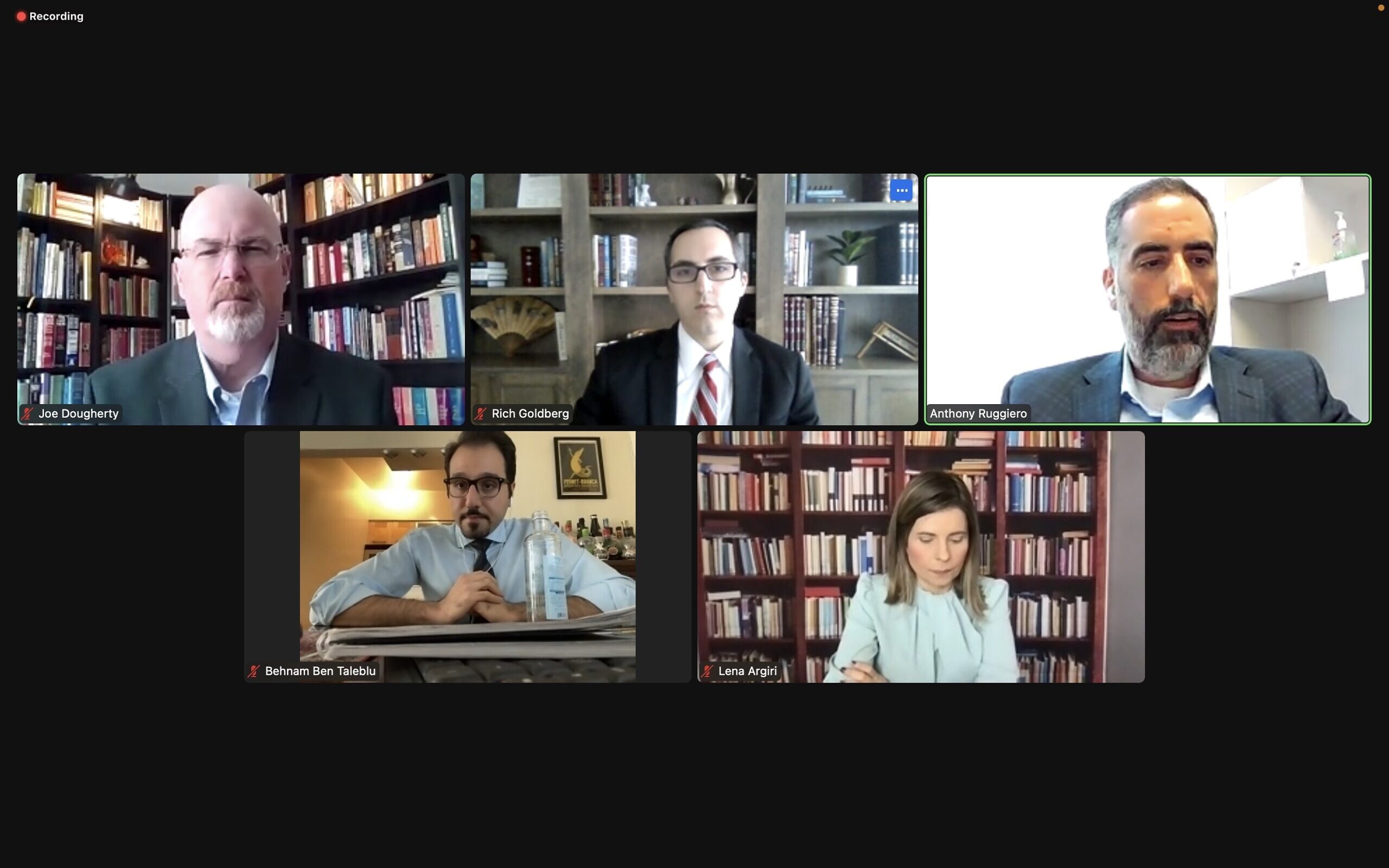 Analysts with the Foundation for Defense of Democracies discuss the impending Iranian Nuclear Deal. Source: Screenshot.

There are also indications that the United States has promised to remove the Islamic Revolutionary Guard Corps (IRGC) from the list of foreign terrorist organizations.

Iran continues to prevent the international nuclear inspectors with the International Atomic Energy Agency (IAEA) from accessing its military sites for inspections, with a nuclear archive captured by Israel’s Mossad leading to a three-year investigation of undeclared nuclear sites.

‘Improve their economic armor as quickly as possible’

Behnam Ben Taleblu, a senior fellow at FDD, traced the Biden-administration trajectory on the JCPOA that seeks to revive the deal that the Trump administration withdrew from in May 2018. Biden officials have argued that leaving the deal allowed Iran to pursue higher enrichment, despite the sanctions put in place that Goldberg said were crippling Iran’s economy.

Ben Taleblu pointed out that the current administration put the JCPOA at the head of its foreign policy, and until recently, promised a longer, stronger deal with Iran, even as many supporters of the president believed that the 2015 deal itself was flawed.

This guarantee, he said, shielded the administration from political criticism.

Meanwhile, the hardline government solidified last year with the installation of Iranian President Ebrahim Raisi took the mask off Tehran’s pretense of being a good-faith actor in negotiations and sought to leverage whatever benefit it could from America’s desperation to negotiate.

The U.S. team on the sidelines continued to settle for less in order to stay at the negotiating table, while constantly saying that the door to diplomacy was closing without any real action.

Ben Taleblu agreed that at the moment, the deal appears to have no commensurate Iranian concessions. The new agreement will be akin to a “JCPOA-lite,” he said, while Iran is able to negotiate more upfront sanctions relief to improve its economy quicker.

“Ultimately, the reason the Raisi government, under direction from [Supreme Leader Ayatollah Ali] Khamenei, in my view, is engaging now is because they want to improve their economic armor as quickly as possible through things like the direct infusions of cash that can come from unfrozen oil assets, as well as enhanced market access—not necessarily by European firms, but by more risk tolerance Asian and particularly Chinese firms,” he explained.

“The same thing happened in 2010 to 2013, where you still had oil exports, but you had a division of labor between banks that touched the U.S. financial system and banks that didn’t, between black hat traders and white hat traders,” continued Ben Taleblu. “And Iran wants to get that cash—plus that selective enhanced market access to repair the chinks in its economic armor—while getting an even less restrictive nuclear deal to begin to sharpen its sword, begin to do what we all have seen the Islamic Republic doing from 2019 to present, which is to credibly threaten its nuclear snapback at a time when … the multilateral snapback [of sanctions] at the U.N. is set to phase out.”

‘We are on a path to allow sanctions to be lifted’

Anthony Ruggiero, a senior fellow at FDD, said that peaceful governments don’t hide their nuclear activities and that Iran has not come clean about its activities for the last three years.

U.S. President Joe Biden, he said, is excusing Tehran’s destructive behavior, despite its stonewalling of the IAEA.

“We’re only here because President Biden and the E3 allowed Tehran—really excused Tehran’s destructive behavior for the last year,” said Ruggiero. “That’s why we’re here. They allowed Iran to reduce the IAEA monitoring of Iran’s nuclear program, and they stonewalled this IAEA investigation.”

In a recent meeting with U.S. Secretary of State Antony Blinken, Israeli Foreign Minister Yair Lapid reiterated the importance of preventing Iran from becoming a nuclear threshold nation—the point that no outside power can prevent it from having a nuclear weapon.

Iran, he said, is approaching that point, and if it is allowed to have an enrichment program, then its rulers would be able to decide when to have a nuclear weapon.

All the experts on the March 8 Zoom call agreed that the administration is rushing into the deal in order to focus on other international and domestic priorities.

Goldberg noted that the COVID-19 pandemic and its related economic and employment costs, coupled with inflation caused by what he said was “outrageous spending,” has turned American attention inward. But it was the withdrawal from Afghanistan last summer, he noted, that reawakened concern about foreign-policy decisions.

As for the JCPOA and Iran malign goings-on, no peaceful program would hide sites, hide materials, hide activities. And rather than ensuring we have a full accounting for all of Iran’s past and present activities, we are on a path to allow sanctions to be lifted, and an entire robust enrichment infrastructure to be left in Iran with sunset provisions … absent any verification of their clandestine nuclear activities. This is the height of insanity … .”