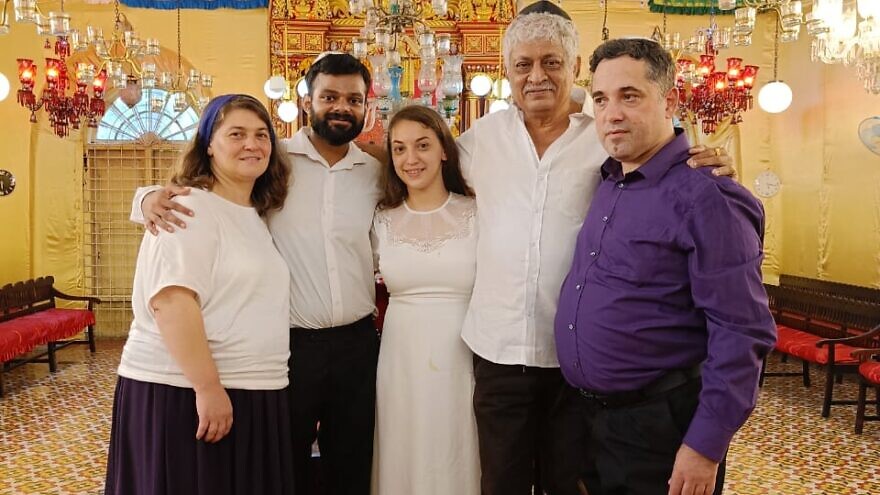 (September 13, 2022 / JNS) The Jewish community of Kerala, India, better known as Cochin Jews, has been shrinking ever since most of its members emigrated to Israel. Those who remain claim to be “the oldest diaspora community outside the Middle East.”

Today, only 15 Jews live in Kerala. An estimated 6,000 to 8,000 moved to Israel or elsewhere. The youth still in Kerala increasingly marry outside the community.

The community commemorated the annual Onam festival on Sept. 8. In addition, last month its members conducted their first wedding in more than a decade, a notable achievement given how few Jews live in the state.

Newlywed Thapan Dubayehudi, in an exclusive interview with JNS, said, “Onam is observed by all religious groups in Kerala, and called ‘the harvest festival of the state.’ ”

Although Kerala, population around 35 million, is majority Hindu, like the rest of India, it has a diverse religious landscape with a long Jewish presence.

“You will notice many women in their striking, colorful garb, the saree,” said Dubayehudi. “Onam is very important for the local Jewish community as well, and we celebrate by preparing a traditional sadhya (a meal consisting of vegetarian dishes served on a banana leaf) at home.”

Legend holds that their ancestors arrived in the subcontinent shortly after the First Temple was destroyed in 587 BCE. Their claim to be the oldest Jewish community outside the Middle East is contested by another Indian group, the Mumbai Jews.

In the 1500s, a different group came to Kerala from Europe, called the Paradesis, sometimes referred to as “White Jews.” They were mostly Ladino-speaking Sephardim from Spain and Portugal. The older, established community became known as Malabaris, and the two groups remained distinct and sometimes experienced frictions.

The Cochin Jewish dialect, Judeo-Malayalam, which is spoken by both Paradesis and Malabaris, is now considered endangered.

Many moved to Israel in the 1960s and ’70s; this was time when many synagogues and congregations shut down very quickly. 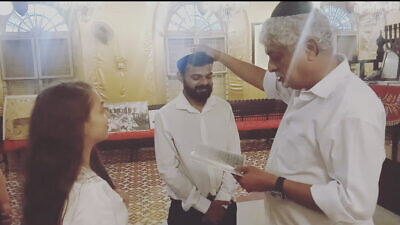 Zipora Meir is among those who emigrated in this era. She reminisces about “enjoying the atmosphere of the Onam festival” at her Hindu friends’ homes.

Elias Josephai, the caretaker of the Kadavumbhagham Ernakulam Synagogue in the city of Kochi, is better known as “Babu Uncle,” Babu being a term of respect meaning “boss” or “father.” He stands out as the one striving to keep the remnants of Jewish life going in Kerala. Meir describes him as “the one-man army keeping the community and synagogue alive.”

Cochin Jews in Israel still celebrate Onam. “This year’s celebration was conducted in the house of Menahem Pal some days ago. The ambassador of India to Israel, Sanjeev Singla, and other officials honored us with their presence,” said Meir.

Dubayehudi adds that “most of the younger generation have already emigrated or are in the process of emigrating. Those who choose to stay in Cochin are almost exclusively older; some who feel that their roots are grounded here and say that they ‘wouldn’t have anything to do’ if they were in Israel.”

Josephai said, “Many of my relatives have made aliyah. But I feel like I would be like a fish out of water if I moved to Israel.”

Dubayehudi, 25, said, “I am extremely honored and blessed to have had my wedding conducted at the Kadavumbhagham Ernakulam Synagogue and officiated by Babu Uncle.

“But it was far from a proper Jewish wedding. There was no minyan or chuppah, just a ring exchange and prayers, b’ezerat Hashem (‘With the help of Heaven’)! Later, we intend to conduct a more ‘complete’ Jewish wedding in Austria at the Vienna Synagogue (the Stadttempel), which my wife is a part of.”

Meanwhile, the community in India struggles to hold on, to maintain its cultural memory and customs as much as possible. “Realistically speaking, I don’t think there is much future for the Kerala Jewish community. It is finished!” said Josephai. 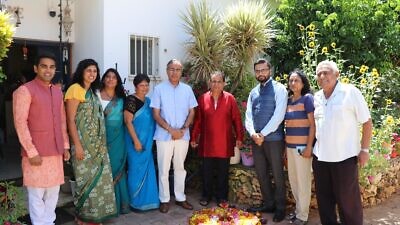 Cochin Jews celebrate the Onam festival in Israel on Sept. 8. (Courtesy)
Republish this article in your newspaper or website