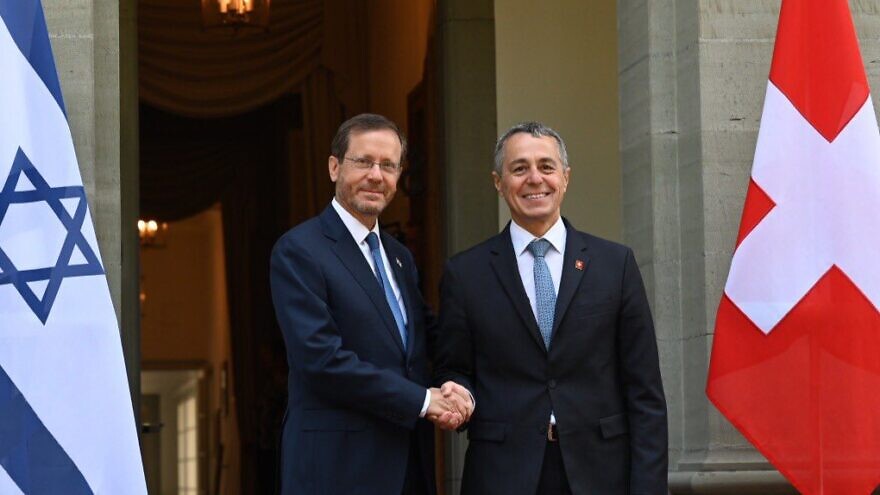 (August 29, 2022 / JNS) Israeli President Isaac Herzog arrived in Switzerland on Monday to join nearly 1,300 Jewish leaders, business people and donors from 38 countries at a three-day World Zionist Organization event celebrating the 125th anniversary of the First Zionist Congress. Delegates are gathered to discuss Israel and the next 25 years.

Herzog, who will deliver the event’s keynote address said prior to leaving Israel, that “the heart of this visit is a historic milestone: The 125th anniversary of the First Zionist Congress in Basel, which was a formative event for the Jewish people and for humanity at large. Zionism is the ideal combination of Judaism’s deepest roots with groundbreaking innovation and entrepreneurial spirit.

“As the president of the nation-state of the Jewish people, I am astonished and filled with pride every day anew at the sight of Herzl’s vision coming to life in front of our eyes, and I feel the heavy-duty and responsibility for the future of the State of Israel and the Jewish people.”

In Bern on Monday, Herzog met with Swiss President Ignazio Cassis at the Lohn Estate, the official estate of the Swiss Federal Council, where an agreement between the Israeli and Swiss national science foundations was signed in the presence of the two men.

At a joint press conference with Cassis, Herzog said: “As you and I discussed, Mr. President, the Middle East is at a critical crossroads. While the Abraham Accords have created new avenues for transforming the region into a hub of stability, peace and prosperity, at the same time, Iran and its proxies continue to spread terror and undermine moderate actors.

“I take this opportunity to call upon all governments, and, of course, the Swiss government, to oppose the Iranian nuclear program in no uncertain terms. Iran has sworn itself to Israel’s destruction and is working tirelessly to destabilize our region and the entire world.”

The Israeli president called on the international community to make it “crystal clear” that calls to eradicate a sovereign member state of the United Nations were unacceptable.

“Iran’s behavior cannot be met with silence. Iran’s activities cannot go unpunished. And, most critically, such a state must not be allowed to possess nuclear capabilities. Iran must be denied such capabilities, by all means necessary,” he said.

“The IAEA’s independence is critical. It should be strictly adhered to, including its ability to investigate violations of nuclear developments in Iran,” the president continued.

“The Iranian president’s statement today is perfectly clear: It says, ‘We don’t respect the independence of the International Atomic Energy Agency to investigate open cases,’ which are major cases involving enriched uranium, located by IAEA inspectors,” he said.