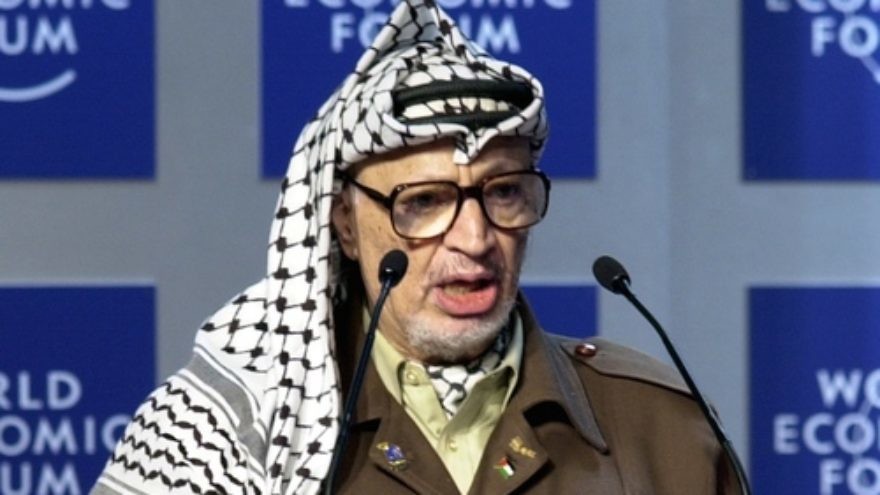 (November 14, 2022 / Israel Hayom) Over the past week, hundreds of testimonies and documents from the Palestinian investigation into the circumstances of the death of Yasser Arafat have been leaked to social media and Palestinian media outlets.

Information from the probe over a decade ago continues to leak and every day new testimonies of persons who appeared before the investigative committee have been made public. Senior Palestinian officials testified that Arafat saw Mahmoud Abbas—now the head of the Palestinian Authority—as a collaborator with Israel and the United States and feared a conspiracy was being weaved against him at the time of the siege of the Muqata’a—the Palestinian presidential compound in Ramallah—during the Second Intifada before he died in mysterious circumstances in a French hospital in November 2004.

The leaks and the Arafat file which was never closed are just part of the story. Another element pertains to infighting within the Palestinian leadership and the battle to succeed President Mahmoud Abbas.

It isn’t clear who is responsible for the leak. While Abbas’s camp blames Gen. Tawfik Tirawi, a former head of the Palestinian General Intelligence Service (GIS), other elements in the PLO claim that interested parties from Abbas’s camp or even elements associated with a third party could be attempting to cause a divide between the Palestinian Authority president and Tirawi. Ties between the two men were already tense before the leaks.

Tirawi denies these allegations and has implored the Palestinian security services to investigate how the hack occurred and how the documents were stolen. “They have the ability to get to whoever did this. First of all, who leaked it and then to investigate who published it,” says Tirawi. “How is it possible that something so important and sensitive has been hacked? It is the security services’ responsibility to find out the truth.”

In an interview with Israel Hayom, Tirawi claimed that the aim of the leak is to harm his good name and to interfere with the work of the probe into Arafat’s death. “For 13 years I have been with investigating the issue of Arafat’s death. Suddenly, everybody comes out against me. Until now, we haven’t heard a word and now a full-on assault,” he says. “It began in 2016. When I was asked in an interview who will replace Mahmoud Abbas and I said that it will be either the commander of the revolution or someone from the Village League[s].” The Village Leagues were established under the auspices of the Israeli security establishment in the 1980s as an alternative to the PLO.

Sources close to Abbas interpreted these comments as an accusation of collaboration with Israel. Since then, the relations between Abbas and Tirawi have been volatile and attempts have been made to remove the general from any position of influence. A few months ago, he was replaced as chairman of Al-Istiqlal University in Jericho, which trains members of the Palestinian security apparatuses, a role Tirawi held for years.

Tirawi told Israel Hayom that he was recently the subject of threats from various Palestinian elements, made in his words “under the table.”

“I received various messages, such as ‘Go overseas, otherwise you will be put on trial and jailed and we will act against you in all sorts of ways.’ Somebody wants to silence me.”

Tirawi refrains from naming any names or pointing to specific elements responsible for the attacks against him. Among certain circles in Ramallah, there is concern that he is in possession of sensitive information and secrets about senior PLO people obtained when he headed the GIS.

The estrangement between Tirawi and Abbas has increased lately following critical remarks he made against the PLO leadership after it lost elections to the student council at Bir Zeit University and in various professional organizations and unions. “I appeared on Palestinian television and I appealed to the PLO and said, ‘Where are you headed? Hamas has conducted a coup in Gaza and now it is carrying out a quiet revolution in the West Bank by gaining control of professional organizations, universities and municipalities.” After that I came under fire. People started to verbally assault me and my colleagues and launched a personal attack against me. Then it continued with the leaks, everything just to hurt me,” he said.