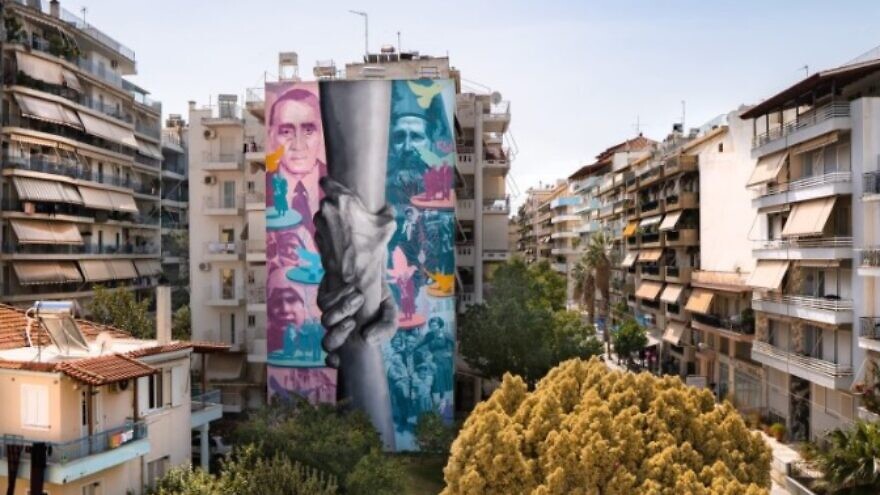 (March 23, 2022 / JNS) A new street mural in Greece honors two non-Jewish Greek citizens recognized by Yad Vashem as “Righteous Among the Nations” for saving Jews during the Holocaust.

The art display in the city of Patras pays tribute to the late Zakynthos Mayor Lucas Carrer and Greek Orthodox Metropolitan Dimitrios Chrysostomos, who together protected Jewish residents on the Greek island of Zakynthos after the Nazis occupied the territory in 1943.

The project was an initiative of Artists 4 Israel in partnership with the Combat Antisemitism Movement and was painted by Kleomenis Kostopoulos, creative director of the Patras-based group Art in Progress.

“Murals are one of the most important forms of contemporary expression and communication in public spaces,” said Kostopoulos, who finished the display last week. “Today, more than ever, we must revisit our history in Greece by bringing it to the streets and putting it in their faces.”

The mural is the second installation of Artist 4 Israel’s “Righteous Among the Nations” Global Mural Project, which honors non-Jews recognized by Yad Vashem for rescuing Jews during World War II.

The first mural in the project was painted last year in the northern Portuguese city of Vila Nova de Gaia. The initiative aims to teach the next generation about the Holocaust and help prevent the spread of anti-Semitism “in a bold, dynamic and public way,” according to its website.

Artists 4 Israel CEO Craig Dershowitz said “the things that bring us together far outnumber the things that divide us. Art has the power to unite us, and we think the act of creating art is universal. This is why bold and highly visible messages are one of the best tools we have to honor these heroes.”