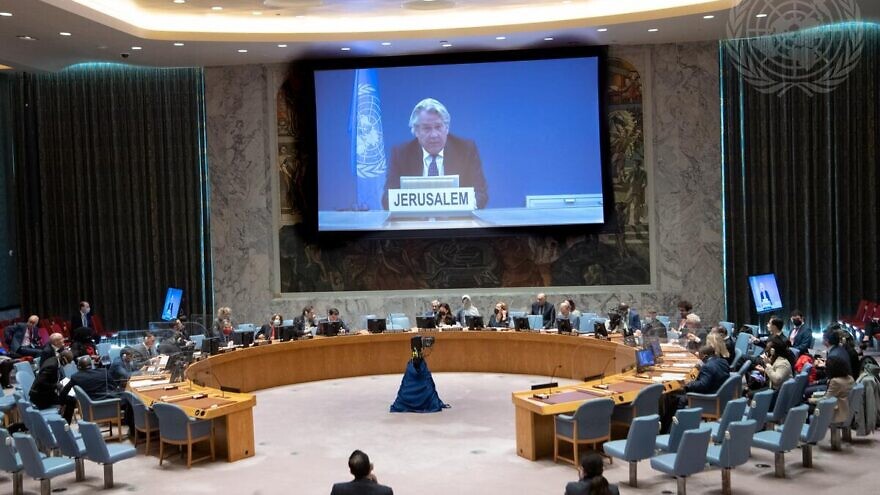 A wide view of the Security Council Chamber as Tor Wennesland (on screen), Special Coordinator for the Middle East Peace Process, briefs the Security Council meeting on the situation in the Middle East, including the Palestinian question. Credit: UN Photo/Eskinder Debebe.
Republish this article
1136 WORDS
Spread the word.
Help JNS grow!
Share now:

(March 23, 2022 / JNS) By the time the meeting was over, four Israelis were dead, as part of a growing spate of terror attacks that has the capacity to help light the region ablaze.

But in the U.N. Security Council’s monthly meeting on the Israel-Palestinian file, the No. 1 priority seemed a bit different.

“Security Council resolution 2334 calls on Israel to ‘immediately and completely cease all settlement activity in the Occupied Palestinian Territory, including East[ern] Jerusalem’ and to ‘fully respect all of its legal obligations in this regard.’ No such steps were taken,” U.N. Special Coordinator for the Middle East Peace Process Tor Wennesland said at the very top of his statement.

Wennesland was referring to a 2006 resolution that declared Jewish construction in “occupied Palestinian territory” constitutes a “flagrant violation” of international law.

He then went through a laundry list of recent purported violations. None of them involved the actual building of homes anywhere.

Wennesland sketched together a compilation of various approvals from different authorities, national and local, that would advance the planning of such construction. All of them involve building in the Israeli capital of Jerusalem. He also included a decrying of a legal opinion by Israel’s outgoing attorney general that allows authorities to declare the Evyatar community south of Shechem—a community named for the victim of a deadly Palestinian terror attack—as state land, something the Israeli government has yet to act on.

With regional tensions simmering, Israelis grappling with stabbing and other terrorist attacks, and the potential for everything to boil over with the approach of Passover, Easter and Ramadan, Wennesland led off by summarizing the work of planning committees to prepare for the possible construction of 3,400 homes in Israel’s capital.

The meeting, which was limited only to Security Council members, did not feature the usual theatrics that come with a standoff of statements between the Israeli and Palestinian Authority envoys. But it was still noteworthy for a number of reasons.

‘Violence is unabated in the area’

Russia, which Israel has attempted to placate during its invasion of Ukraine, laid blame almost exclusively at the feet of Israel for the troubles in the area. Russia’s First Deputy Permanent Representative Dmitry Polyansky said, “Unfortunately, we have to state that violence is unabated in the area of ​​the Palestinian-Israeli confrontation, which leads to casualties on both sides and has the potential to escalate into a full-scale military escalation, which we have repeatedly witnessed.”

He added that “the situation is further exacerbated by the illegal unilateral actions of Israel, fraught with dangerous turbulent consequences for the entire region of the Middle East. Among them are the confiscation of Palestinian land and forced eviction, the demolition of property, the illegal construction of settlements [and] attempts to change the historical status quo of the Holy Places.”

Polyansky, who mockingly referred to “Tel Aviv” as the seat of Israel’s government despite Russia’s own precedent-setting 2017 recognition of the western portion of Jerusalem as Israel’s capital, expressed purported deep concern about Israeli settlement activity and called for the Middle East “Quartet,” of which it is a member, to intensify its efforts to bring about peace in the region. Polyansky also curiously claimed that “it is impossible to advance the settlement process without restoring the unity of the Palestinian ranks on the basis of the PLO and holding elections.” The Palestine Liberation Organization (PLO) is a U.S.-designated terror organization.

The United Arab Emirates, which has taken few, if any, public actions at the United Nations to assist Israel since its ascension to the Security Council in January, held back on criticism of Israel until further down in its statement. Ambassador Lana Nusseibeh instead led by noting that the upcoming holidays, “represent an opportunity to promote the values of peaceful coexistence between different religions. … We also support [Wennesland’s] call to the concerned parties to work to reduce tensions, especially in Jerusalem city, and refrain from taking any action that may increase tensions and escalation. This would also require the parties to take proactive and coordinated efforts to consolidate and preserve the basis of the recent truce.”

Nusseibeh also commended King Abdullah of Jordan and the government of Egypt for their recent efforts to maintain calm in the region.

However, while taking no note of recent terror attacks against Israelis, Nusseibeh went on to say that “continued settler violence” was concerning, along with an “upsurge in settlement activities in recent years.”

French Ambassador to the United Nations Nicolas de Rivière inadvertently summed up the Security Council’s long-running stance on the Israeli-Palestinian conflict in one sentence.

“Israel’s measures of appeasement are welcome, but they must be significantly expanded to stop a new cycle of violence,” de Rivière said, offering the majority view that only expansive Israeli concessions and placation can stop the bloodshed.

U.S. Ambassador to the United Nations Linda Thomas-Greenfield, who has largely stuck to her word that she would protect Israel in the Security Council chamber, led off her statement by reiterating the American commitment to expanding upon the Abraham Accords normalization agreements between Israel and its Arab and Muslim neighbors, taking note of recent visits by Israel Defense Forces’ Chief of Staff Lt. Gen. Aviv Kochavi to Bahrain and Israeli President Herzog to Turkey to meet with their counterparts.

“These visits demonstrate that good-faith engagement can build mutual confidence and create a path towards greater security and prosperity,” she said.

She added that “normalization is not a substitute for serious engagement between Israelis and Palestinians. That is why the Biden administration has made a point of intensifying dialogue with both Israeli and Palestinian leaders. Deputy Assistant Secretary Hady Amr just visited Israel and the West Bank to discuss Israeli-Palestinian relations. He highlighted the need to improve the quality of life for Palestinians in tangible ways and reaffirmed that Israelis and Palestinians alike deserve equal measures of security, freedom and prosperity. We encourage all those who look for peace in the Middle East to commit to constructive acts that help Palestinians and Israelis coexist and prosper.”

As the session came to a close, news broke that an Israeli Bedouin Arab had killed four Israelis in a car-ramming and stabbing attack in the southern city of Beersheva before being shot to death by two armed civilians, one of them an Israeli bus driver.

Later in the day, Wennesland released a statement.

“There is no justification for violence or terrorism. There is nothing heroic in the killing of civilians and there is no excuse for praising such acts. It must be condemned by all,” he wrote, noting it marked the seventh stabbing attack against Israelis this month.

Earlier, at the Security Council, it had taken Wennesland 631 words before any mention of recent violence against Israelis.