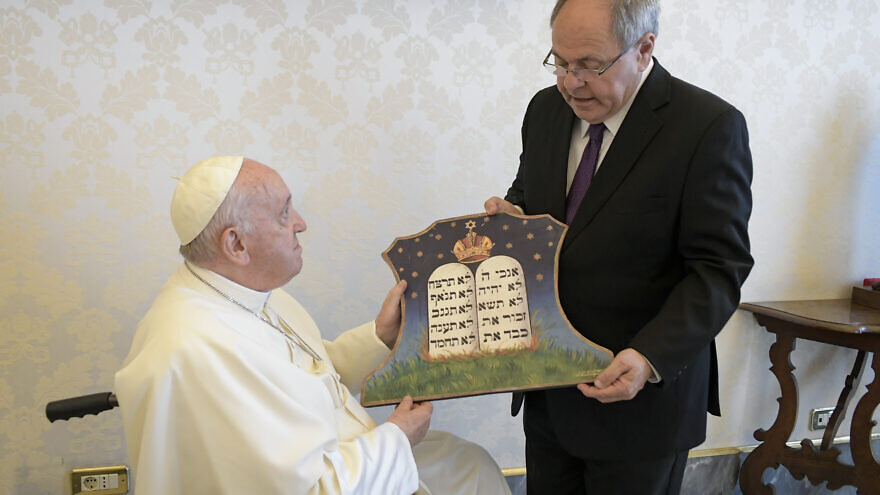 Yad Vashem chairman Dani Dayan meets with Pope Francis at the Vatican, where he presents him with a plaque of the Ten Commandments, on June 9, 2022. Credit: Vatican Media.
Spread the word.
Help JNS grow!
Share now:

(June 9, 2022 / JNS) Chairman of the Yad Vashem Holocaust Memorial Center in Jerusalem, Dani Dayan, met with Pope Francis at the Vatican on Thursday.

“I felt the weight of responsibility as someone who represents not only himself and not only the present, but rather the entire Jewish people throughout its history,” he said.

During the rare private audience, “the two discussed the importance of Holocaust research and remembrance in the Christian world,” according to a statement released by Yad Vashem.

The pope and Dayan also connected due to their Argentinian roots, according to the statement.

“While the past three popes have visited Yad Vashem on Jerusalem’s Mount of Remembrance, the context of these visits reflected the status of the relationship between the Catholic Church and the Jewish people. This private audience with Pope Francis, who last visited Yad Vashem in 2014, had a different focus—to bolster collaborative activities between Yad Vashem and the Vatican in areas of Holocaust remembrance, education and documentation, and to discuss efforts to fight anti-Semitism and racism worldwide,” said the memorial center.

Israeli Ambassador to the Vatican Raphael Schutz was also included in the meeting.

In a statement, Dayan noted that “the pope expressed great emotion when discussing the Holocaust. He said that the opening of the Vatican Archives related to World War II is an issue of justice and that the church is not afraid of history.”

To that end, “Yad Vashem archivists are currently gathering information from these collections, with the goal of bringing them to the Mount of Remembrance in Jerusalem where they can be studied and hopefully shed light on the experiences and fate of many Holocaust victims,” the statement said.