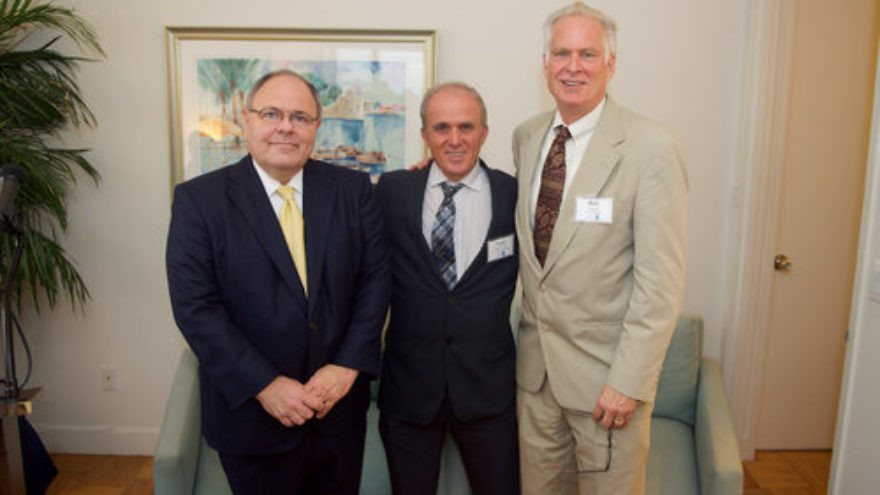 A rapidly aging population and increased environmental risks have led cancer to overtake heart disease as the leading cause of death in parts of the Western world. Researchers remain a long way from eradicating cancer, but several new treatments may offer hope. On the cutting edge of cancer research in Israel is Prof. Yosef Yarden of the Weizmann Institute. Earlier this year, Yarden was awarded the Israel Prize—the state’s highest honor—in life science research.

Born in 1952, Yarden received degrees in biology and geology from the Hebrew University of Jerusalem, and a molecular biology doctorate from the Weizmann Institute. He is known for his discovery of the function of an enzyme that strengthens the chemical signals that lead cells to become cancerous, especially in breast, ovarian and lung tumors. Much of his work is centered on EGFR and HER2, which belong to a family of growth factor receptors that play a crucial role in tumor progression. Yarden’s findings have laid the foundation for the creation of new cancer treatments such as immunotherapy, which uses the body’s immune system to help fight cancer.

JNS.org spoke with Yarden while he was in New York attending a fundraiser for the Israel Cancer Research Fund, which supports Israeli scientists in their efforts to find a cure and treatments for cancer.

JNS: Could you explain the nature of the research that led to you receiving the Israel Prize?

Yosef Yarden: “I became interested in the connection not only between genes and cancer, but also specific molecules called growth factors.

“Cancer tumors need to collaborate with the human body. To them it is a hostile system and environment. They find a way to recruit the human body or host; they attract blood vessels for oxygen and sugars, minerals, vitamins, etc….so they can sustain themselves. Somebody needs to take care of them and feed them. The way they do that is by sending signals to the human body, telling them that they are a new organ here and to take care of it, [to] supply the oxygen and all of the goodies.

“The growth factors are what tell the body that this is a new organ here—you’ve never seen it before, but that organ is growing very rapidly, kind of like an embryo. Those are the growth factors.

“We started a way to block the growth factors, because that is kind of the key of collaboration between the tumor and the host.”

How does your research relate to immunotherapy?

You believe that immunotherapy is preferable to traditional forms of combating cancer, such as chemotherapy and radiation. Why?

“Radiation is one way to slow down the proliferation of cancer cells. Unlike most cells in our body, that are resting and rarely divide, cancer cells are rapidly dividing. Chemotherapy and radiation slow down the rate of proliferation, but it comes with an enormous cost. There are some cells that are rapidly dividing and this affects them, such as hair and skin cells, gastrointestinal cells, red and white blood cells etc….it is very hard for patients.

“The new generation of immunotherapy antibodies are in fact biological molecules and the body naturally uses them, so they come with very mild side effects. The future is very much in immunotherapy.”

What impact has the Israel Cancer Research Fund (ICRF) had on your career, and throughout Israel?

“In many aspects, Israel is considered a superpower in the field of cancer research worldwide—proportionally, in terms of breakthroughs, volumes of findings, pharmacology of cancer and even the success of cancer treatment of patients in Israel.

“ICRF is committed to basic research, which we know is a precondition of actual early detection and prevention of cancer. The ICRF serves as a major player in the Israeli arena that deals with cancer research and early detection research.

“The ICRF has supported me in the past 30-plus years. I always remember my first grant from the ICRF in 1988, which helped me in my first critical steps early in my career. They gave me money for seven years, which is still today my longest period of grant money. It is very critical, timely and very generous.”

What do you love about being a research scientist?

“I believe it is a great time to be a cancer researcher today, with all the new promising breakthroughs. When I began, we were just shooting in the dark. Cancer is such a difficult disease to model, to mimic and study. Since it may develop so slowly in the body, initially dormant, nobody can detect it. Then it emerges sometimes when we are old, and it attacks us.

“I think one major milestone in my career was the completion of the human genome project around the millennium. It helped us enter a new era in cancer research. It gave us, in a way, a roadmap of cancer and a listing of all of the mutations.

“The tricky thing about cancer is, it is very individualized. A particular person with kidney cancer may be different than another person with kidney cancer. Now we understand that, and we have to tailor therapy and treatment to every patient according to their cancer genome, not even the human one. The cancer genome is essentially a copy of a human genome, except it comes with several mutations. The mutations push cancer forward. And they are a major target of our research.”