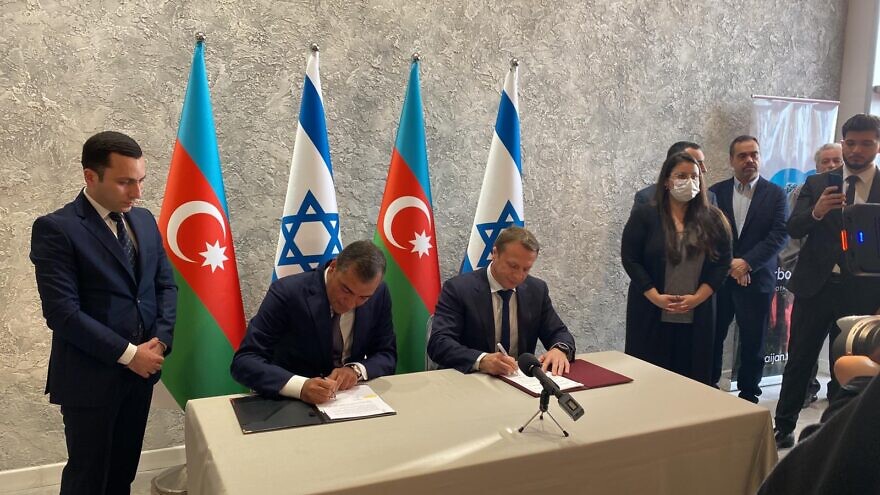 An agreement to cooperate in the field of tourism was signed by the chairman of the State Tourism Agency of Azerbaijan Fuad Naghiyev and Israel’s Minister of Tourism Yoel Razvozov on March 30, 2022. Source: Twitter.
Spread the word.
Help JNS grow!
Share now:

(April 1, 2022 / JNS) Azerbaijan has opened its first tourism office in Israel and signed a cooperation agreement to work together to further the industry, Israeli Ambassador to Azerbaijan George Deek announced on Thursday.

The document was signed by the chairman of the State Tourism Agency of Azerbaijan Fuad Naghiyev and Israel’s Minister of Tourism Yoel Razvozov.

Azerbaijan’s official tourism representation office is at the Herbert Samuel Dock in Tel Aviv. The office will work with all major travel agents, tour operators and airlines, which are currently conducting direct three-hour flights from Israel to Baku, reported The Jerusalem Post.

CEO Florian Sengstschmid said: “This office will serve to establish fruitful collaborations with our Israeli counterparts while increasing awareness about Azerbaijan among Israelis; maintaining day-to-day management and administration related to tourism promotion, along with detailed market research; and bring Azerbaijan and Israel even closer.”

Earlier in March, Israel and Azerbaijan marked the 30th anniversary of the establishment of diplomatic relations between the two countries.