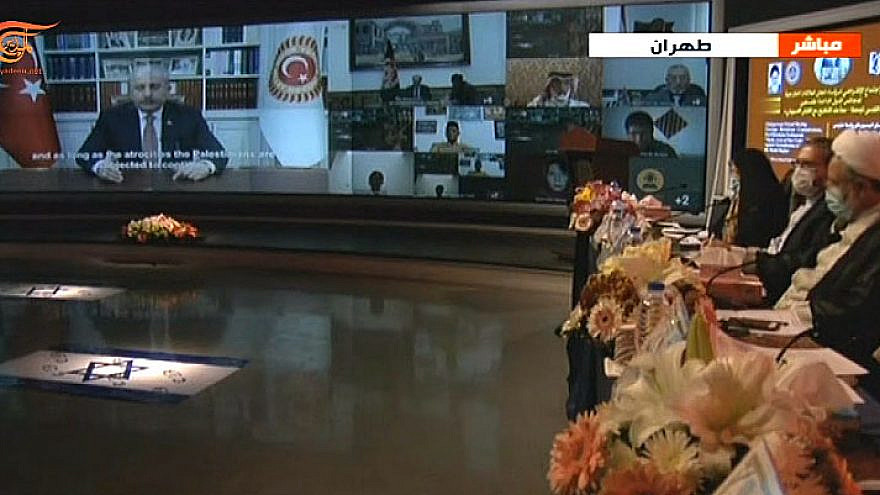 The Tehran event, one of two that launched the "Peoples Against Normalization" campaign on Jan. 18, 2021. Source: Facebook.
Spread the word.
Help JNS grow!
Share now:

The campaign was kicked off at two concurrent online events on Jan. 18: one in Gaza, where pro-BDS American and European groups were the main participants; and another in Tehran, where participants included leaders of Iran, Turkey and Hamas.

Both events were aired on Al Mayadeen, a pro-Hezbollah Arabic news outlet, while some parts of the Gaza conference were broadcasted live on Facebook.

The Gaza event was led by the coordinator of the Global Campaign to Return to Palestine, Sheikh Yusuf Abbas. He declared that the goal of the campaign, which the group intends to wage on the “cultural, medial and the popular level,” is to “make everyone understand that normalization [with Israel] is treason.”

One of the participants, the Samidoun Palestinian Prisoner Solidarity Network, was recently designated by Israel as terrorist organization for acting as the European voice for the Palestinian Front for the Liberation of Palestine, which has been designated as a foreign terrorist group by the United States since 1997.

High-profile politicians from Iran and Turkey participated in the Tehran event, including Mohammad Bagher Ghalibaf, speaker of the Iranian parliament, as well as Ismail Haniyeh, a senior Hamas leader.

“The American-Zionist axis aims to destroy Arab countries and the Al-Aqsa mosque [in Jerusalem] through normalization processes,” said Ghalibaf.

Mustafa Sentop, the speaker of the Turkish parliament who also participated in the event, asserted that “the key to the solution is Al-Quds [Jerusalem].”

He added that the success of the Palestinian cause will depend on “opening [the minds] of the world order created in the 20th century for debate following the two World Wars.”

In an Al Mayadeen Facebook post of Sentop’s speech, participants in Tehran can be seen on a set that included Israeli flags mounted on the floor with footprints on them.