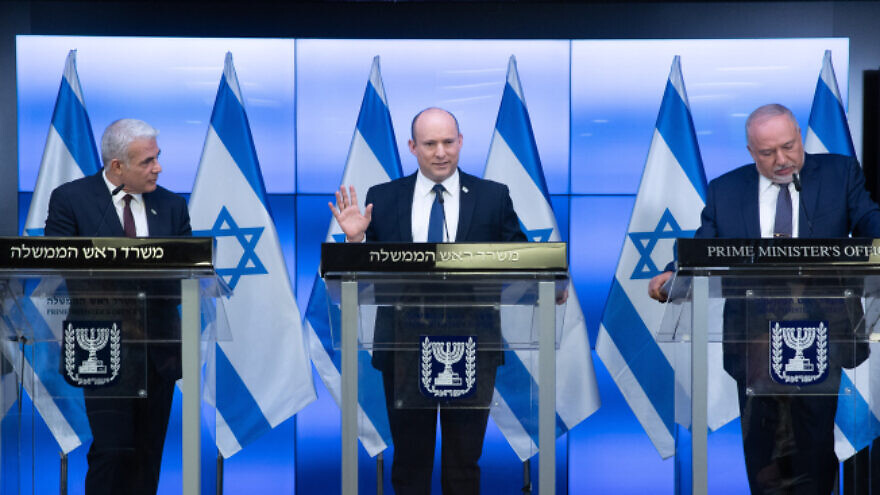 (November 7, 2021 / JNS) Israeli Prime Minister Naftali Bennett and Foreign Minister Yair Lapid presented a united front on Saturday with regard to the reopening of a U.S. consulate in Jerusalem.

Speaking during a joint press conference after the passing of the 2021-22 budget, Bennett said that there was “no place” for a U.S. consulate to the Palestinians in Jerusalem. This message, he said, had been conveyed to the Americans both by himself and by Lapid.

Israel had expressed its position to the Americans “consistently, quietly, without drama,” said Bennett. “And I hope it will be understood.”

Jerusalem, said the prime minister, “is the capital of the State of Israel, only.”

Lapid agreed, stating that the United States already had an embassy in Jerusalem, and that sovereignty over Jerusalem belonged exclusively to the State of Israel.

Asked by a reporter whether Israel might be prepared to compromise on this issue now that the budget had been passed, shoring up the stability of the coalition government, Lapid stated that the issue was not one of politics of coalitions.

Rather, he said, the State of Israel objects “in principle” to the opening of a consulate to the Palestinians in Jerusalem.

“There already is a U.S. embassy here, he said, adding that if the United States wishes to open a consulate in Ramallah, Israel would have no objection.

The 2022 state budget bill was passed on Friday morning by a vote of 59 to 56, following a marathon overnight session. The 2021 budget was passed on Thursday by a vote of 61-59. This is the first time in three years the country has managed to pass a budget and marks a major milestone for Bennett’s government. Under Israeli law, a new election is automatically triggered if a government fails to pass a budget within 100 days. For the current government, the deadline was Nov. 14.

The Biden administration has been pushing for the reopening of the consulate on Jerusalem’s Agron Street, which was closed and merged with the U.S. embassy in 2018 by the Trump administration.

Secretary of State Antony Blinken reaffirmed America’s commitment to reopen the consulate during a meeting with Palestinian Authority leader Mahmoud Abbas in Ramallah in May.

“As I told both Prime Minister [Benjamin] Netanyahu and President Abbas, the United States will go forward with the reopening of its consulate in Jerusalem. This is an important step,” said Blinken. “That’s an important way for our country to engage with and provide support to the Palestinian people.”

However, the U.S. administration decided to hold off on the issue until after the passing of the budget, Axios reported. The delay “shows how invested the Biden administration is in helping to stabilize the new Israeli government,” said the report.

Deputy Secretary of State for Management and Resources Matt McKeon confirmed on Nov. 4 that the administration is seeking to reopen the consulate in its original location on Agron Street.

Palestinian Authority Prime Minister Mohammed Shtayyeh stated on Sept. 14 that as far as the P.A. is concerned, the reopening of the consulate would signal a reversal of the Trump administration’s recognition of Jerusalem as a unified city.

“Why is the [U.S.] consulate [in Jerusalem] and its opening important to us?” he asked. “Because it is the American address for taking care of the Palestinian cause, far from the embassy that the U.S. transferred from Tel Aviv to Jerusalem on the pretext that Jerusalem is one city,” he said.

“The message from this [Biden] administration is that Jerusalem isn’t one city and that the U.S. administration does not recognize the annexation of Arab Jerusalem by the Israeli side,” he added.

The P.A. viewed the consulate as “the seed of a U.S. embassy in the state of Palestine,” said Shtayyeh.