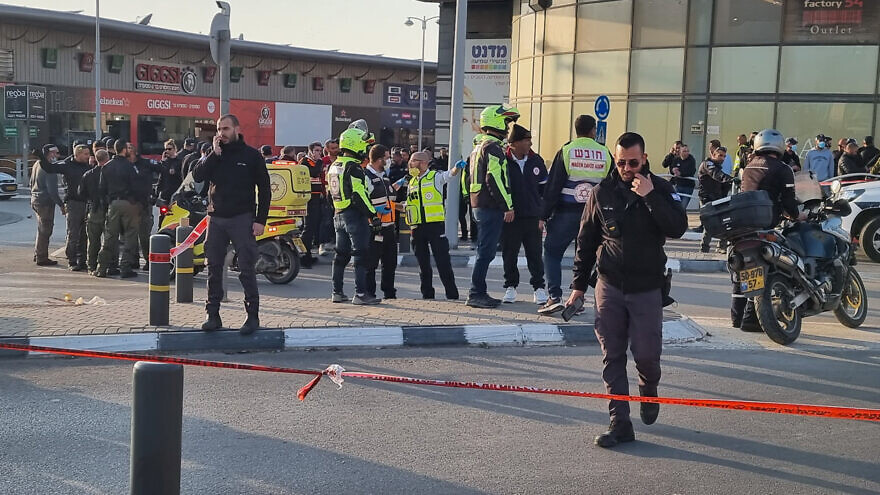 The scene of a car-ramming and stabbing attack outside the Big shopping center in Beersheva, in southern Israel, on March 22, 2022. Photo by Flash90.
Spread the word.
Help JNS grow!
Share now:

(March 22, 2022 / JNS) Israeli Prime Minister Naftali Bennett praised the Israeli bus driver and a civilian who neutralized a terrorist knife-attacker in Beersheva on Tuesday with their handguns, killing the assailant.

“The civilians who shot the terrorist exhibited alertness and bravery, and prevented additional victims. Security forces at the highest alert. We will act with a strong hand against terrorists. We will pursue and get hold of those who assist them,” he said in a statement.

The prime minister sent his deepest condolences to the families of the attack’s victims, saying, “I’ve now held a situation assessment and consultations with the Public Security Minister and the Police Inspector General following the attack.”

Four civilians were murdered in the terrorist attack in the city in one of the worst nationalistic incidents in recent years.

The terrorist—a resident of the Bedouin town of Houra—ran over a cyclist before leaving his vehicle and embarking on a stabbing spree near the Big shopping center. He stabbed to death a gas-station employee, and later, two women and a man. Two other civilians were injured.

The terrorist has been identified as Muhammad Abu Al-Kiyan, 34, reported Kan News. He was known to be a supporter of ISIS and served jail time in Israel.

A spokesman for the terror organization, Tarek Salami, said the attack is “a natural response to the terror crimes of Israel in the occupied Negev,” adding that “Israel should know that our people will not surrender, and that the flag of resistance and jihad will remain hoisted.”

Israeli Defense Minister Benny Gantz said: “Those who encourage the latest attacks or support them will pay the price.”

Speaking during a tour of Israel Defense Forces Northern Command, Gantz said the IDF and Israeli security forces will use all available means to prevent future attacks to any extent possible.