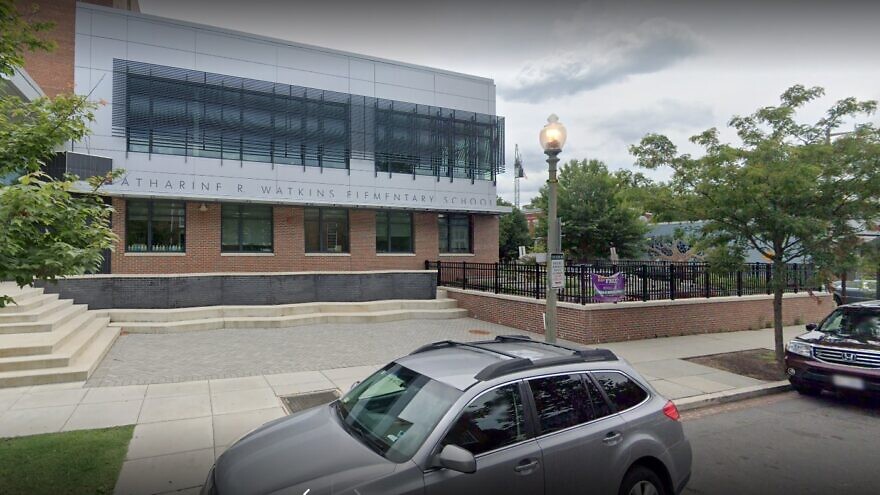 (December 20, 2021 / JNS) Parents, local officials and Jewish groups are demanding answers after third-graders at a Washington, D.C., elementary school were instructed to re-enact scenes of the Holocaust, including pretending to dig graves and shoot classmates.

According to news reports, a librarian at the Watkins Elementary School in D.C., who has been identified as Kimberlynn Jurkowski, assigned jobs to the students, including having a Jewish child pretend to be Adolf Hitler and commit suicide, as other children had to “dig” graves and pretend to shoot their classmates. When asked why the Germans acted the way they did, the staffer reportedly told the children, “because the Jews ruined Christmas.”

Jurkowski was placed on leave as the school district investigates the incident.

“The long-term damage done by this instructor is impossible to measure at this time in terms of the trauma inflicted on students involved,” said Roz Rothstein, CEO StandWithUs and the daughter of Holocaust survivors. “We would like to thank Watkins Elementary School for placing the instructor—librarian Kimberlynn Jurkowski—on leave, while an investigation takes place. Parents should inform their children that no adult, including teachers, should be encouraging children to keep secrets, as this school librarian did.”

According to The Star-Ledger in New Jersey, Jurkowski had previously worked in the Garden State, where her teaching license had been suspended for her part in a tutoring scam that defrauded the Atlantic City school district for thousands of dollars.

On her LinkedIn page, Jurkowski says she has “15+ years of working with k-12 public schools,” and, “My goal is to teach, lead, connect and inspire students while remaining on the cutting edge of educational technology and librarianship.”

Many are clamoring for a more detailed accounting of what happened and how.

“The Capitol Hill Cluster School PTA Board is saddened and outraged over the hateful and completely inappropriate class instruction presented on Friday afternoon at Watkins Elementary School. Our utmost priority is ensuring our third-graders and their families have the resources they need to begin the healing process,” the PTA leadership said in a statement issued Monday afternoon. “We strongly encourage DCPS (D.C. Public Schools) to conduct a thorough investigation with transparency, urgency and to institute appropriate policies and practices necessary.”

Phil Mendelson, chairman of the Council of the District of Columbia, said in a statement Monday: “The re-enactment of the Holocaust by third-graders at the direction of a librarian at Watkins Elementary School was shocking and beyond belief.

“It’s been universally condemned. What is important, now, is what DCPS is going to do about it. … How thoroughly will DCPS investigate key factors around this incident: What enabled the librarian to think this was appropriate? How did the librarian come to DCPS in the first place? What corrective actions will be taken in response?” posed Mendelson. “What happened cannot be undone, but what DCPS does about it now is critical.”

While both D.C. Mayor Muriel Bowser and DCPS’s Chancellor Lewis D. Ferebee have been tweeting on Monday about COVID-19, neither appeared to mention the incident in their social-media posts.

‘A generic lesson to learn from this’

Jewish groups, meanwhile, are “horrified” by the educator’s conduct.

“We’re horrified third-grade students were instructed to re-enact scenes from the Holocaust. Simulation activities trivialize the experience of victims and often reinforce stereotypes,” said the Washington, D.C., branch of the Anti-Defamation League. “We’ll be providing resources and support to help promote healing and education.”

In a statement posted online, the Jewish Federation of Greater Washington said “we are deeply disturbed by reports of third-graders in a D.C. school being instructed to re-enact scenes from the Holocaust.”

Speaking to JNS, Rabbi Abraham Cooper, associate dean and director of global social action of the Simon Wiesenthal Center in Los Angeles, said the assignment was “beyond inappropriate.”

“Third grade to me sounds very young to be introducing Holocaust education,” he said. “The school board and maybe the teacher should use this as a learning moment on how to do things wrong. This was an exercise that never had the chance to be pedagogically sound or one that would make children, as they mature, learn about the subject.”

He added: “The statement about ruining Christmas? I’m not sure this is someone who should be in the classroom.”

Overall, it has been a “terrible year for anti-Semitism and Holocaust misappropriation,” said Cooper. “I think there is a generic lesson to learn from this. It’s obviously important to mandate Holocaust education, but first, you have to educate the teachers so they learn the fundamental lessons of because before you can decide how to make an impact in the classroom you have to understand it.”