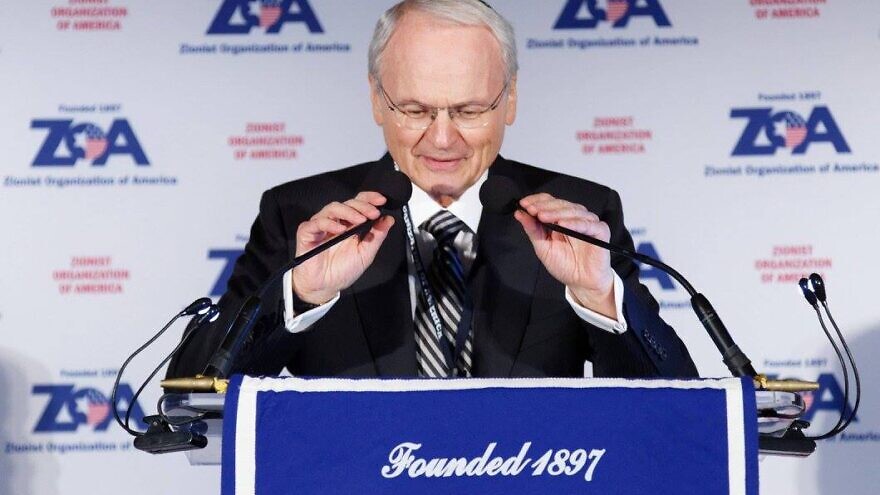 (April 13, 2021 / JNS) Key committees of the Boston Jewish Community Relations Council have recommended against the removal of the Zionist Organization of America while noting that any support for white supremacism among member groups could lead to future removal.

“ZOA is gratified that two important bodies of the Boston JCRC have overwhelmingly voted to support ZOA remaining a member of the JCRC, and we look forward to a final determination of support,” Mort Klein, national president of ZOA, told JNS.

Last year, several left-wing Jewish groups filed a petition to initiate the removal of ZOA from the Boston JCRC.

The petition—filed by 25 JCRC council members, including 12 representatives from the Workmen’s Circle, J Street, Jewish Alliance for Law and Social Action, Jewish Labor Committee, Keshet, New Israel Fund and Women of Reform Judaism—claims that rhetoric used by Klein “crosses into xenophobic and racist territory,” and is “not compatible with and is in conflict with the mission of JCRC.”

Specifically, the petition singled out Klein’s comments on the Black Lives Matter movement, saying they “extended well beyond acceptable discourse on race” and also against HIAS, citing his “vicious attacks” against the organization.

In past tweets and statements, Klein has labeled Black Lives Matter as anti-Semitic and anti-Israel, and has urged that it be labeled a hate group. In its presentation to the JCRC, ZOA highlighted the attacks by rioters during Black Lives Matter protests in May 2020 that targeted Jewish restaurants and synagogues in Los Angeles.

Klein has also been outspoken in his condemnation of groups such as J Street, the New Israel Fund and Women of Reform Judaism, whom he has accused of defending Reps. Ilhan Omar (D-Minn.)  and Rashida Tlaib (D-Mich.), as well as Palestinian activist Linda Sarsour, all supporters of the BDS movement against Israel.

The ZOA leader said that his group explicitly rejects racism and that the criticism by these organizations seeking ZOA’s ouster is unwarranted.

“Inappropriate concern was raised due to our legitimately criticism of  the anti-Israel actions and policies of the organization called Black Lives Matter. This was especially hurtful to ZOA since it fully, publicly and unequivocally supports equality and fairness to all races, including, of course, all black lives,” he said.

The ZOA leader also rejected criticism over concerns that his organization raised about HIAS and Muslim refugees, arguing that “it’s ZOA’s mission to fight Israel-bashing and anti-Semitism, and that’s all we’ve done.”

According to the JCRC, the Membership Committee conducted a six-month-long review and voted unanimously that ZOA not be removed. This position was endorsed by the JCRC board.

However, in a nod to the controversy, the committee recommended that the organization adopt language to make clear its stance against white supremacism and racism. There was no recommendation regarding anti-Semitism and anti-white racism on the left.

“No Member Organization of JCRC, through its programs, activities or practices—or through the public leadership platforms of its executive officers—should legitimize or normalize organizations or individuals who embrace white supremacy, white nationalism or the conspiracy theories which underlie these ideologies,” the committee recommended, adding that any such actions could be grounds for condemnation or removal.

Other groups in the JCRC have also come under fire, in 2019 the council initiated a review process of the Boston Workmen’s Circle, one of the group’s involved in the ZOA petition, over BDS support tied to Jewish Voice for Peace.

The full JCRC Council is set to meet on April 27 via Zoom to make the final decision on ZOA’s status.