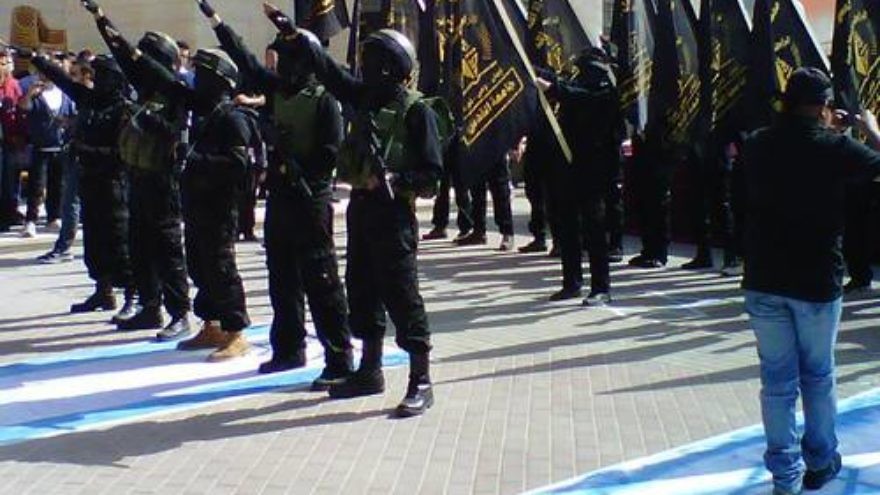 (November 19, 2013 / JNS) Brandeis University on Monday announced the suspension of its decade-old partnership with Al-Quds University following a recentNazi-style rally at the Palestinian school in Jerusalem.

“While Brandeis has an unwavering commitment to open dialogue on difficult issues, we are also obliged to recognize intolerance when we see it, and we cannot—and will not—turn a blind eye to intolerance,” Brandeis said in a press release. “As a result, Brandeis is suspending its partnership with Al-Quds University effective immediately. We will reevaluate our relationship with Al-Quds based on future events.”

Brandeis said its president, Fred Lawrence, had asked Al-Quds President Sari Nusseibeh to issue an “unequivocal condemnation of the demonstrations.” Nusseibeh on Sunday night emailed Lawrence an English translation of a statement posted in Arabic on the Al-Quds website, and Brandeis said it considered the statement “unacceptable and inflammatory.”

Rather than exclusively addressing the Nazi-style rally, the Al-Quds statement also described “vilification campaigns by Jewish extremists” against the university.

“These extreme elements spare no effort to exploit some rare but nonetheless damaging events or scenes which occur on the campus of Al-Quds University, such as fist-fighting between students, or some students making a mock military display,” the statement said. “These occurrences allow some people to capitalize on events in ways that misrepresent the university as promoting inhumane, anti-Semitic, fascist, and Nazi ideologies. Without these ideologies, there would not have been the massacre of the Jewish people in Europe; without the massacre, there would not have been the enduring Palestinian catastrophe.”

“As occurred recently, these opportunists are quick to describe the Palestinians as a people undeserving of freedom and independence, and as a people who must be kept under coercive control and occupation,” the Al-Quds statement continued. “They cite these events as evidence justifying their efforts to muster broad Jewish and western opinion to support their position. This public opinion, in turn, sustains the occupation, the extension of settlements and the confiscation of land, and prevents Palestinians from achieving our freedom.”

On Nov. 14, two Brandeis faculty members left for a trip to Al-Quds that was scheduled before the Nazi-style rally, and planned “detailed discussions” with administrators at the Palestinian university regarding the rally, Brandeis Senior Vice President for Communications Ellen de Graffenreid had told JNS.org last week.

“The Brandeis University community abhors the actions that took place on the Al-Quds University campus and condemns all acts that incite or encourage senseless violence,” Lawrence, the school’s president, wrote on the Brandeis First blog.

In 2003, Brandeis and Al-Quds formed “a unique intercultural partnership, linking an Arab institution in Jerusalem and a Jewish-sponsored institution in the United States in an exchange designed to foster cultural understanding and provide educational opportunities for students, faculty and staff,” according to the Brandeis website.

The partnership “was initiated with the best of intentions for opening a dialogue and building a foundation for peace,” Brandeis said Monday.

“While recent events make it necessary for us to suspend our current relationship with Al-Quds, we will continue to advance the cause of peace and understanding on our campus and around the world,” the school said.