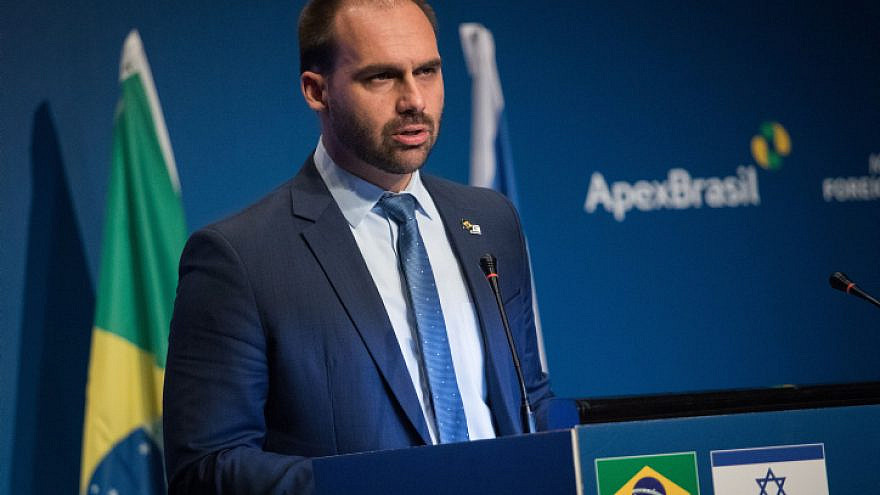 (March 8, 2021 / JNS) A Brazilian delegation arrived in Israel on Sunday to learn about a EXO-CD24, a new drug developed at the Tel Aviv Sourasky Medical Center, which has shown promising results in curing COVID-19 patients.

The delegation—led by Brazilian Foreign Minister Ernesto Araujo and Eduardo Bolsonaro, the son of President Jair Bolsonaro and chairman of the Foreign Affairs and Defense Committee in Brazil’s National Congress—also came to discuss ways in which the two countries can cooperate on handling the pandemic, Ynet reported.

“We are working together to increase bilateral cooperation in the war on the virus,” said Israeli Foreign Minister Gabi Ashkenazi, who hosted Araujo at the Ministry of Foreign Affairs in Jerusalem. “We will assist Brazil in any way possible and will examine ways to increase research and development of drugs and other solutions for dealing with the virus.”

During the meeting, Ashkenazi spoke about the friendship between Brazil and Israel, which he noted dates back to before the establishment of the state. The foreign ministers also discussed bilateral cooperation in the fields of economics, technology and health, especially in light of the ongoing pandemic.

During visits by the prime minister of Greece and the president of Cyprus last month, both heads of state requested that their countries be included in future EXO-CD24 trials.

Last week, Austrian and Danish leaders came to Jerusalem to discuss establishing a joint fund for the research, development and production of future coronavirus vaccines.