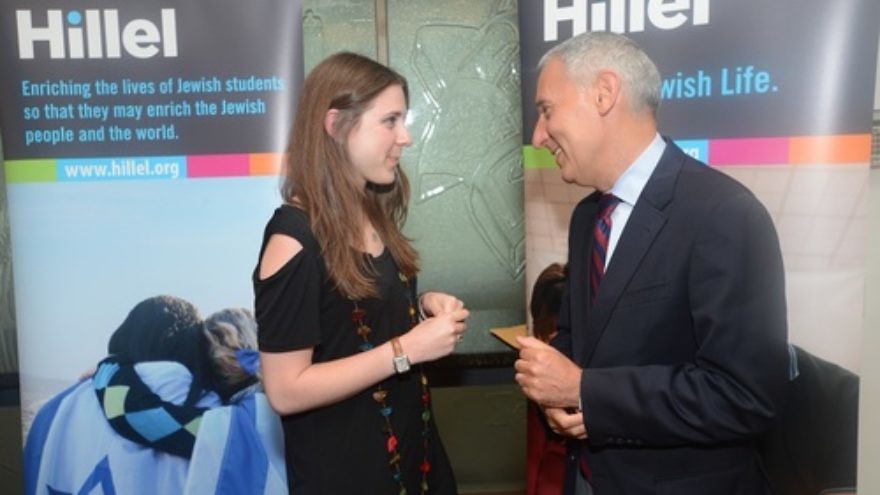 That letter has since led to the founding of “Open Hillel,” a broader movement calling on Hillel International—the Jewish campus umbrella represented on more than 550 colleges and universities—to allow the expression of more diverse points of view, including those critical of Israel.

The notion that Hillel International is not inclusive is one that the organization’s president and CEO, Eric Fingerhut, wants to dispel.

On Sept. 9, Fingerhut met with Open Hillel student representatives in Boston “in order to listen to their concerns and to personally convey that Hillel welcomes all Jewish students no matter their politics or perspectives,” he told JNS.org after the meeting.

“We had a good and candid discussion and I appreciate [Open Hillel’s] viewpoints,” said Fingerhut. “While we do not agree on everything, I am pleased that they understand the value in being part of the global Hillel movement. Hillel works hard every day to provide a high-quality experience for all Jewish students on campus.”

Fingerhut also stressed Hillel’s inclusivity in an interview before the meeting, but said Hillel would not compromise on its pro-Israel mission.

“We are a pro-Israel organization,” he said. “It is part of our mission to encourage students to build an enduring commitment to Israel as a Jewish and democratic homeland. That is what we are, [and] that leaves within it a broad range to debate Israel’s policies, and where Israel might be right or wrong on particular issues.”

Lex Rofes, a Brown University alum and a member of Open Hillel’s student committee who helped organize the meeting with Fingerhut, told JNS that at many campuses, students who sought “to create Jewish programming that was meaningful to them” have been told that they could not implement their plans, either because the programming itself included content or speakers overly critical of Israel, or because they wanted to co-sponsor the event with a group that supports the Boycott, Divestment and Sanctions (BDS) movement against Israel. Hillel’s official Israel guidelines state that it will not “partner with, house or host organizations, groups or speakers that delegitimize, demonize or apply a double standard to Israel.”

In December 2013, the Hillel student board at Swarthmore College voted to reject Hillel’s Israel guidelines and align itself with the Open Hillel movement. In response, Fingerhut wrote a public letter in which he stated that Hillel “expects all campus organizations that use the Hillel name to adhere to these guidelines. No organization that uses the Hillel name may choose to do otherwise.”

This past February, the Jewish Union at Vassar College in New York took a similar position, eliciting a statement by Fingerhut that “we agree that Hillel should and will always provide students with an open and pluralistic forum where they can explore issues and opinions related to their Jewish identity. We thank the Vassar students for their commitment to this value and accept their invitation for further conversation.”

But Fingerhut reiterated that Hillel would not “give a platform to groups or individuals to attack the Jewish people, Jewish values or the Jewish state’s right to exist.”

“Our expectation is that all Hillel affiliates will continue to uphold these standards for partners and co-sponsors,” he said.

In April, a group of current and former Jewish student leaders at Connecticut-based Wesleyan University announced that the Hillel-affiliated Wesleyan Jewish Community was also rejecting the umbrella group’s Israel guidelines.

Rofes believes Fingerhut’s responses to Open Hillel’s concerns, particularly to the incidents at Swarthmore and Vassar, have been a “mixture.”

“I thought that the initial blog post [Fingerhut] posted [on Swarthmore] wasn’t necessarily the kind of tone I would have loved, but I understand their disagreement with Swarthmore’s decision and that’s their right,” he said.

Fingerhut’s wording on Vassar was more to Rofes’s liking, and he added that “in other regards [Hillel has] responded positively to us.”

Hillel’s responses to the Swarthmore and Vassar decisions were the same, said Fingerhut.

“Hillel’s guidelines are what they are, and all Hillels are expected to work within those guidelines,” he told JNS.

Hillel International also sent representatives to both campuses to address the concerns.

“We try to work with students to accommodate as much as they want to do as possible within the guidelines,” said Fingerhut.

For the meeting, Open Hillel student representatives did not prepare to raise any specific concerns, but simply wanted to listen to Hillel International’s strategy on Israel for the coming year, including the potential establishment of a student cabinet, which Rofes sees as a sign of Hillel’s growing commitment to student empowerment.

“We got an email that Hillel is interested in meeting, [and] we of course were happy to go and do that,” said Rofes. “[We were] just looking to sort of check in” and discuss ways to “find some common ground and work together,” he added.

Fingerhut’s goal is to assure students of how welcome they are at Hillel.

“There’s nothing involved in Hillel’s Israel guidelines that in any way excludes any student based on any opinion they might have,” Fingerhut said, differentiating between students’ ability to express a diversity of views on Israel within Hillel’s tent, but not to partner with anti-Israel organizations on a Hillel-sponsored activity.

Another voice speaking out on the issue is Safe Hillel, a campus movement created in response to Open Hillel with the goal—much like Hillel itself—to dispel misconceptions about Hillel’s lack of inclusiveness.

Hillel is not stifling student opinions, but simply saying is that it “will not sponsor hate groups, and anti-Semitic and anti-Israel speakers,” said Mael.

Rofes, however, said Open Hillel just wants “a conversation where people can counter one another, and can grow from one another and understand each other’s perspectives.”

To that end, Open Hillel is holding a conference from Oct. 11-13 at Harvard University that will include a variety of speakers, among them well-known BDS activist Judith Butler.

“We would love Hillel International to send some folks to the conference, and we actually invited them a while back,” said Rofes.

According to Mael, Fingerhut’s willingness to meet with Open Hillel students and proactively hear their concerns is in line with Hillel’s overall philosophy and “disproves the entire thesis of Open Hillel as a farce.”

“Many of the Open Hillel people have a problem with the existence of the Jewish state of Israel, and they harbor intense hatred towards the Jewish state,” and therefore Hillel International “is doing what it can to maintain the pro-Israel integrity of its organization,” Mael said.

Ultimately, the issue of whether or not students feel welcome at Hillel is different than a notion of needing to agree on every issue, said Fingerhut.

“We’re never going to agree on everything,” he said. “That’s not possible when you represent all Jewish students on campus.”

For those who want to be involved with programs and groups that are not sanctioned by Hillel’s guidelines, “there are many [other] outlets on a campus” for that, added Fingerhut. “Campuses are the most open places in society.”