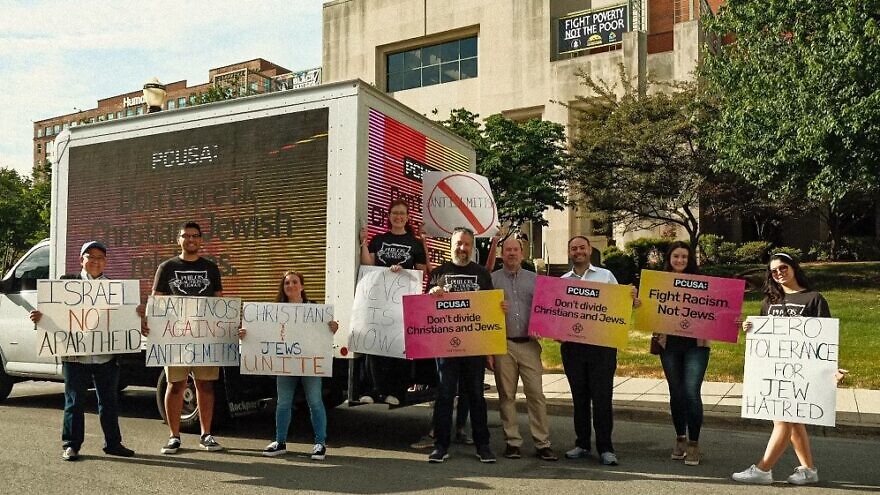 Several Christian organizations, alongside groups opposed to anti-Semitism, protested against the overture and the denomination’s growing anti-Israel posturing before and after its adoption. The Philos Project, a Christian nonprofit dedicated to fostering positive Christian engagement with the Middle East, was at the forefront of the demonstrations.

On June 25, Philos organized a campaign for participants to drop a pre-drafted letter at their nearest Presbyterian church three days before the committee considered the overture. The letter called on the denomination’s leaders to reject the overture, “On Recognition That Israel’s Laws, Policies, and Practices Constitute Apartheid Against the Palestinian People.”

Submitted by the Presbytery of Grace—a body of Presbyterian elders and ministers—the overture called on the Presbyterian Church to consider Israeli laws vis-à-vis Palestinians as fulfilling “the international legal definition of apartheid.”

Philos’s letter said that the overture would fuel anti-Semitic hate by comparing “the only Jewish place for self-determination to be evil and in likeness to Nazi Germany” and by “falsely” claiming “violations against minority communities in Israel” and the Palestinian territories.”

The letter also mentioned that the overture advanced “claims of individuals who have a record of making anti-Semitic statements” and ignored “international witnesses, South African voices, and Arab leaders in Israel verifying Israel’s practices do not constitute ‘apartheid.’ ”

More than 10 other Christian and pro-Israel organizations had signed on to Philos’s letter, including the Pastors Wives of America, National Hispanic Pastors Alliance and Covenant Daughters Ministries International. 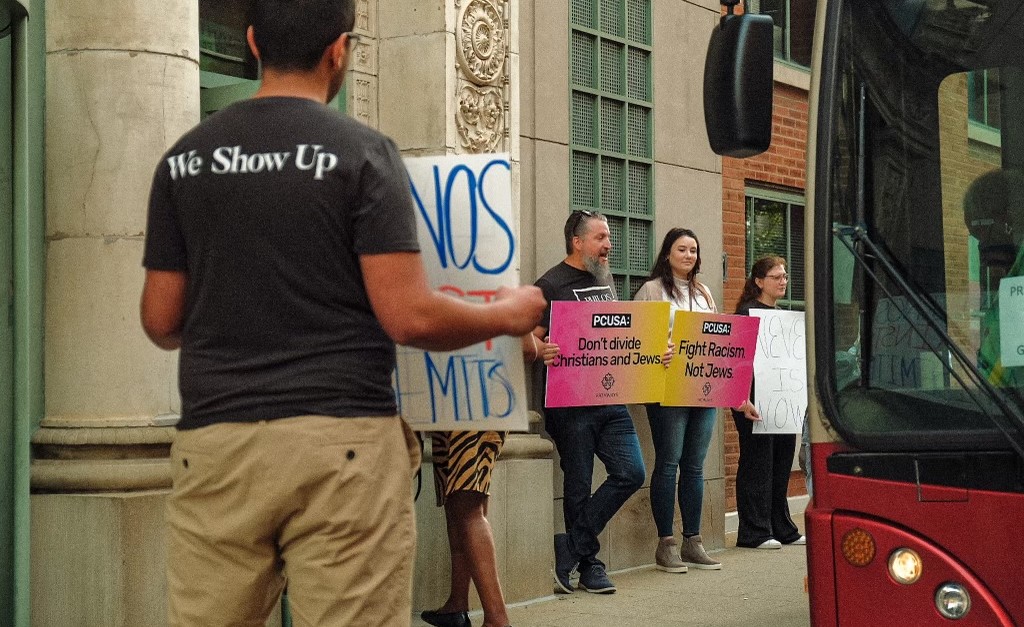 Participants in the “Sidewalk Stand Against Antisemitism” stand near the headquarters of the Presbyterian Church (U.S.A.) in Louisville, Ky., on June 28, 2022. Demonstrators asked PCUSA delegates entering the building to vote against the overture accusing Israel of apartheid. Credit: Courtesy of the Philos Action League and Pathways for Peace.

On June 28, Philos organized a “Sidewalk Stand Against Antisemitism” near the Presbyterian Church U.S.A National Headquarters in Louisville, Ky., to protest the overture and the denomination’s hostility towards Israel.

Participants in the sidewalk protest included members of Philos and representatives from Pathways for Peace, the Combat Antisemitism Movement and the Anti-Defamation League.

Protestors brought a mobile billboard reading “Don’t Wreck Christian-Jewish relations” and a hot-air balloon carrying the sign “Fight Racism, Not Jews” near the entrance of the denomination’s headquarters.

Issues related to the Israel-Palestinian conflict dominated the June 28 agenda of the assembly’s International Engagement Committee. The committee debated and passed four overtures on the issue on June 28, including an amended version of Grace Presbytery’s overture accusing Israel of apartheid.

The committee’s June 28 afternoon session began with it adopting the overture “Jerusalem 3, 2, 1: Three Faiths, Two Peoples and One Human Family.”

The overture accused Israel of not respecting the rights of Muslim and Christian worshipers in Jerusalem, denouncing “Christian Zionism” as “idolatry and heresy,” and called on the U.S. government to apply the Leahy law to prohibit assistance to the Israeli government.

The committee then debated and passed the overture accusing Israel of apartheid 28-3 after amending it.

In addition to unanimously passing an overture recognizing May 15 as “Palestinian ‘Nakba’ Remembrance Day,” the committee unanimously passed the overture “A Call for Ending the Siege of Gaza and Collective Punishment of Innocent Palestinian and Israeli Citizens” from the New Castle Presbytery.

The overture called on the U.S. government to urge Israel to “cease and desist” Israeli “military attacks” against Gaza “by air, land and sea”; called on Israel to lift its blockade on Gaza; and called on Palestinian terrorist groups to stop firing “unguided rockets into civilian areas of Israel.”

Aside from the overtures, the assembly’s Ecumenical and Interfaith Engagement committee recommended one resolution related to Israel—“ECU-08: On Solidarity with Palestinian Christians” 28-1 on June 27.

The resolution called for the Presbyterian Church to express support for Palestinian Christians and characterized Israeli security policies as religious persecution. It also referenced statements calling Israel’s rule over Judea and Samaria an “illegal” occupation. 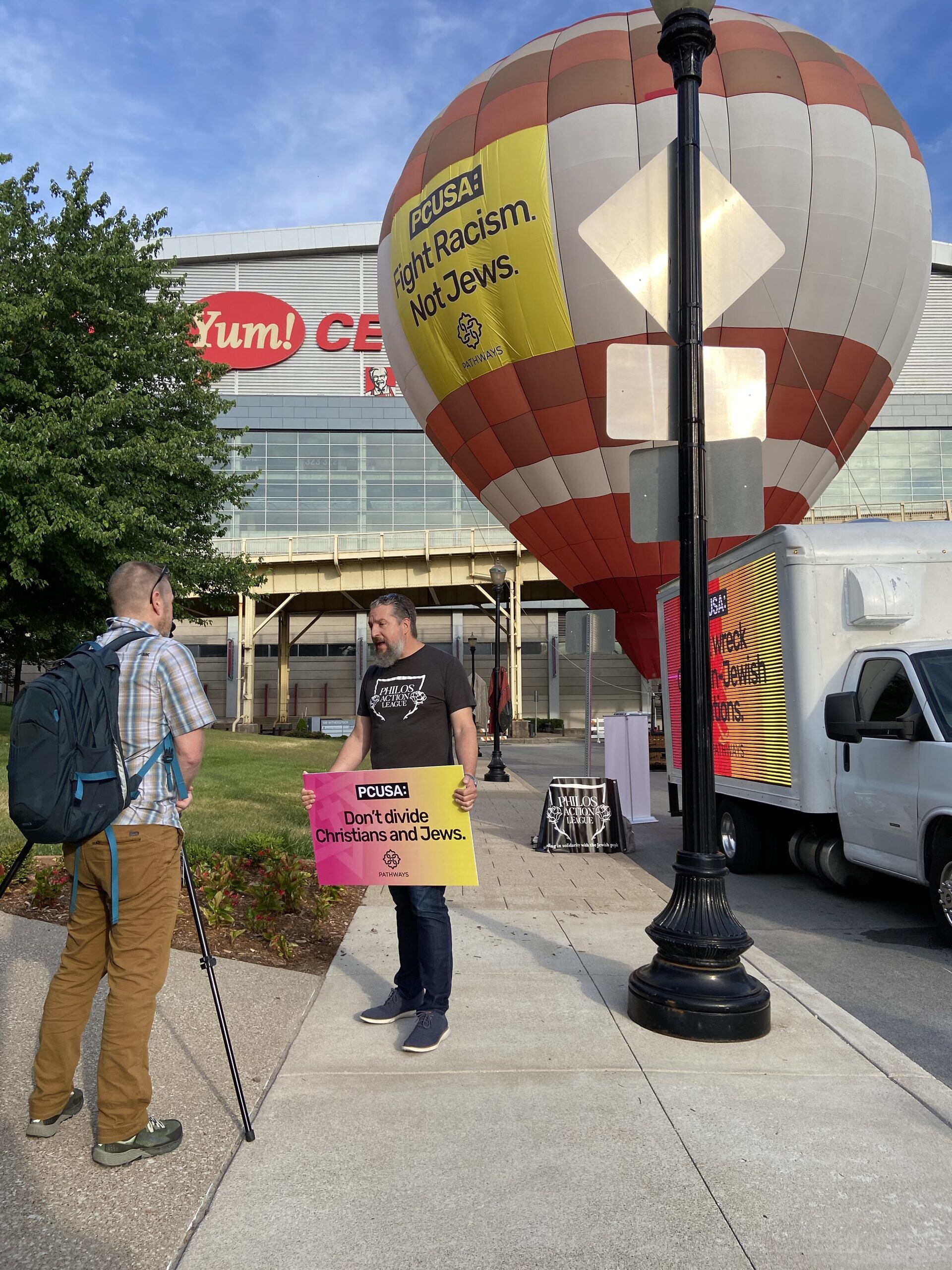 ‘Instrumentalize the church to demonize Israel’

B’nai B’rith Director of United Nations and Intercommunal Affairs David J. Michaels told JNS that the Presbyterian Church’s overtures “escalate a record of obsessive one-sidedness,” adding that they contain a “recognition only of Israeli sin and only of Palestinian hardship.”

“Israel, a democracy, is slandered as an ‘apartheid’ state, but not its violent adversaries, or any non-democratic state,” he said. “Palestinian suffering is memorialized as a ‘catastrophe,’ but not Israeli Jews’ suffering.”

Responding to the overture accusing Israel of being an apartheid state, the ADL said in a June 30 statement that the overture’s “demonizing language only serves to drive a wedge between PCUSA and the Jewish community and does nothing constructive to bring about peace between Israelis and Palestinians.”

The Presbyterian Church, in past years, has earned a reputation for being ardently anti-Israel through its actions, such as expressions of support for the anti-Israel Boycott, Divestment, and Sanctions Movement and calls for the removal of Jewish settlements from historically Jewish Judea and Samaria.

“Since 2004, the Presbyterian Church (USA) has been in the vanguard of a deep and growing threat to over half a century of Christian-Jewish reconciliation,” said Michaels. 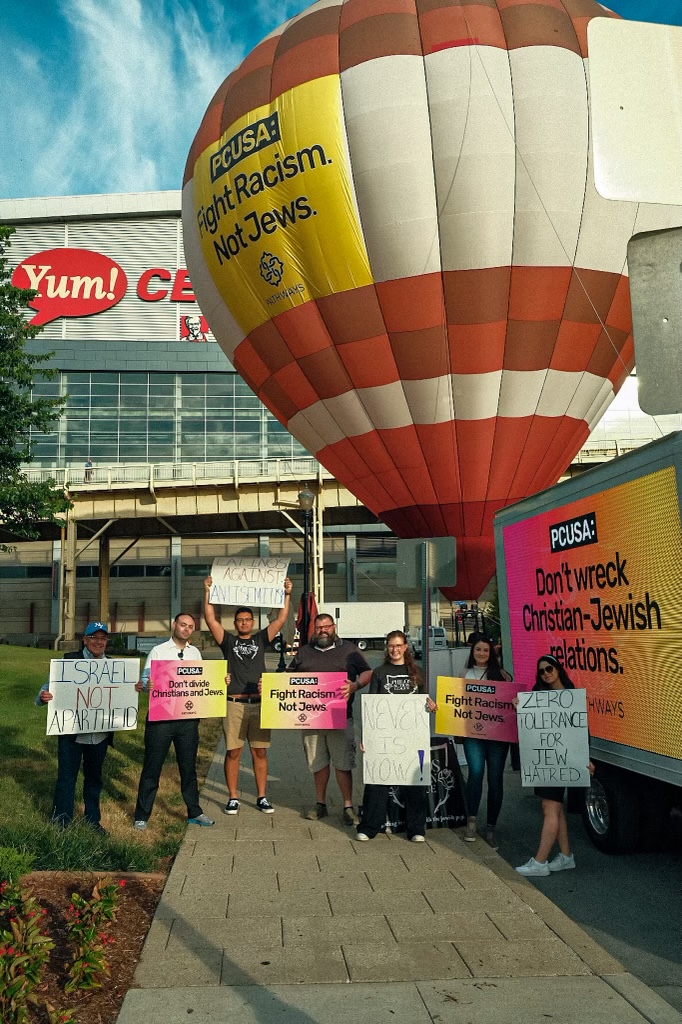 Participants in the “Sidewalk Stand Against Antisemitism” stand next to a hot-air balloon with the words “Fight Racism. Not Jews.” written on it in Louisville, Ky., on June 28, 2022. Credit: Courtesy of the Philos Action League and Pathways for Peace.

While Jews have “committed friends among Presbyterians,” he said, “a determined minority of extreme activists has worked to instrumentalize the church to demonize, isolate and practically harm Israel and the half of the Jewish people who call it home.”

While the church has grown hostile towards the Jewish state over the years, not every Presbyterian congregation shared the denomination leadership’s view.

Its decision to stand with the Jewish state came at a cost.

The church subsequently lost about one year’s worth of church revenue after making the stand, FPC-Fort Myers Senior Pastor Paul de Jong told JNS. Since then, FPC-Fort Myers broke ties with the denomination and joined the Evangelical Presbyterian Church.

Nelson’s words drew condemnation from some of Nelson’s fellow Presbyterians themselves.

“Nelson’s remarks were so offensive and inflammatory that people who would normally just sit on the sidelines and throw up their hands … even they have been moved to say, ‘We can’t allow this,’ ” Rev. Todd Stavrakos, a co-convener of Presbyterians for Middle East Peace (PFMEP) told JNS at the time.

In response to Nelson’s comments, the ADL had sent a letter to the Presbyterian Church stressing that Nelson’s “rhetorical flourish” only served to “put the responsibility for this alleged evil entity onto the shoulders of the Jewish people as a whole, with an implicit condemnation of Jewish ethics and morality.”

The letter further stated that while ADL knew the church was a “longtime advocate for the Palestinian cause,” the church has “at times used language and approaches that ADL and others in the Jewish community have viewed as unconstructive.”

The Presbyterian Church (USA)’s increasing hostility towards Israel has also earned it the criticism of the largest pro-Israel Christian group in America: Christians United for Israel.

“While their repugnant anti-Semitic attitude towards Israel generates some headlines, it’s worth recalling that PCUSA has just 1.1 million adherents, and I doubt the majority of them are paying attention to the church’s anti-Israel pet project,” CUFI founder and chairman Pastor John Hagee told JNS.

“The anti-Israel bias of the PCUSA leadership is immoral and should be condemned, but the vast majority of Americans stand with Israel,” said Hagee. “Ultimately, the hypocrisy and hatred of a handful of leaders at a tiny Christian denomination say far more about those leaders than it does about Israel.”