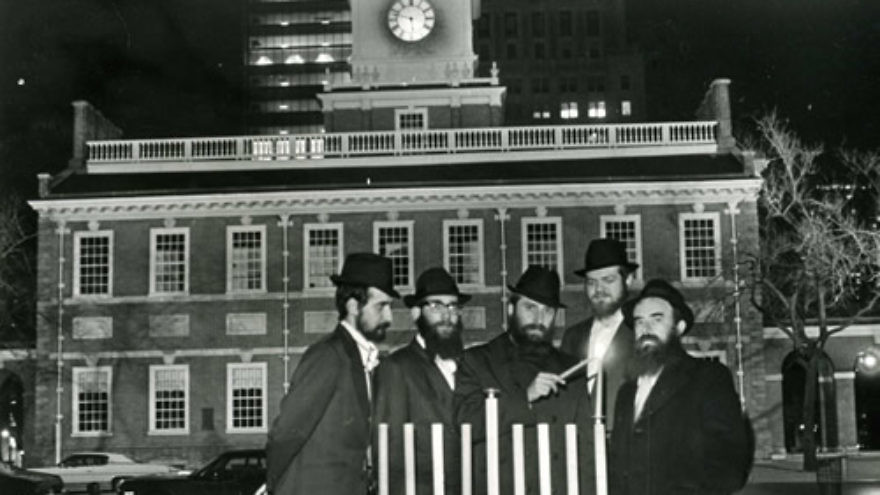 Rabbi Abraham Shemtov, right, in front of Independence Hall in Philadelphia at the lighting of the first-ever public menorah in 1974. With him were yeshivah students who helped build the menorah from scratch. Credit: Lubavitcher Center/Chabad.org.
Republish this article
1485 WORDS
Spread the word.
Help JNS grow!
Share now:

With the arrival of the winter holiday season, many municipalities throughout the United States are gearing up for the festive time of the year by decorating public areas with Christmas trees, snowflakes, and even Hanukkah menorahs. But the holiday displays are sometimes accompanied by not-so-festive controversies over the appearance of religious symbols in public places.

The debate over public displays of religion has been a longstanding one, despite numerous legal rulings in favor of the displays. But for Jews, the increasing inclusion of the Hanukkah menorah as well as other Jewish symbols in the pantheon of American civic and religious discourse highlights their mainstream acceptance in society.

Today, publicly displayed menorahs have become commonplace in the U.S.—largely due to the efforts of the Chabad-Lubavitch movement, whose giant menorahs and even car-rooftop menorahs signal that the holiday season has arrived in any given community. (Chabad has a permanent presence in 49 of 50 U.S. states, with only South Dakota left out.)

“Chabad is out there in the world to make sure that every Jew is not forgotten. Every Jew is remembered and thought about, and that every Jew maintains a connection to their heritage, so there is an assurance for the continuity of Judaism,” said Rabbi Yisroel Rosenfeld, a Pittsburgh-based Chabad emissary who has extensive experience on this issue due to his involvement in County of Allegheny v. American Civil Liberties Union (ACLU), the 1989 Supreme Court case on a publicly displayed nativity scene and 18-foot-tall menorah in Pittsburgh.

According to Chabad, the first public menorah lighting occurred in Philadelphia in 1974 near the Liberty Bell, and the tradition spread when the Hasidic group’s seventh leader or “Rebbe,” Rabbi Menachem M. Schneerson, issued a directive encouraging menorah lightings in public places. In line with the movement’s famous zeal and grassroots initiatives, Chabad eventually launched a global menorah campaign, and today thousands of Chabad-led menorah lightings take place in municipalities across America.

“Obviously there are always those who come up and have [taken] issue with it,” Rosenfeld told JNS.org. “The perspective the Rebbe gave us was that Jews should have a positive feeling about their mitzvot and their Judaism. So he encouraged us to do whatever we can to display those menorahs.”

The public display of religious symbols is anchored in the First Amendment of the Constitution in the so-called “Religious Clauses” of the Establishment and Free Exercise Clause. The Constitution states that “Congress shall make no law respecting an establishment of religion” in a portion known as the Establishment Clause, but proceeds to also ban “prohibiting the free exercise” of religion in a portion known as the Free Exercise Clause. The discourse surrounding these clauses has become one of the most controversial debates in America, yielding numerous legal battles being waged over the display of religious symbols in public areas.

Most of these issues stem from a concept known as separation of church and state, which was attributed to founding father Thomas Jefferson in a letter he wrote to the Danbury Baptist Association in 1802 and has been used as an argument against the use of religion in public places, despite the church-state concept not being explicitly spelled out in the Constitution.

“The ACLU argued that having a menorah on public property seemed like the city of Pittsburgh was endorsing the Jewish religion and encouraging people to follow the religion,” Lewin told JNS.org. “[But] the Supreme Court was clear in this case that a total display with a Christmas tree and a menorah does not do that and shows the diversity of religion in the U.S.”

Following the case in Pittsburgh, numerous legal battles were fought over this issue in cities like Grand Rapids, Mich., and Atlanta. In 2002, Supreme Court Justice John Paul Stevens—who had dissented on the Pittsburgh decision—overruled an appeals court order and allowed Chabad to display a menorah in Cincinnati’s Fountain Square. Stevens said that due to the square’s “historic character as a public forum,” the city could not limit access to the area during the holiday season.

The Cincinnati case helped clarify what cities can and cannot do concerning access to public places.

“By now it has been established that there is a constitutional right to put menorahs in public places,” Lewin told JNS.org.

Nevertheless, the public display of religious symbols continues to be contested in some local communities, with new cases emerging every year—though most don’t end up going to litigation. For instance, the University of Maine this week ignited a controversy by banning Christmas trees, wreaths, and menorahs in public areas. The school said in a statement that it “makes every effort to ensure that all members—students, employees, alumni and the public—feel included and welcome on campus,” and that banning decorations of particular religions would help promote diversity.

In October, a group of Jewish high school students in suburban Milwaukee were barred from erecting a sukkah on school property for the holiday of Sukkot. It was actually Jewish parents and local Jewish officials who advocated the sukkah ban, citing the separation of church and state.

“The challenge of our public high schools is to find the balance between those two principles,” said Elana Kahn-Oren, director of the Milwaukee Jewish Federation’s Jewish Community Relations Council, The Forward reported.

“Schools must give students the ability to practice their religion without having school-sanctioned religious observance,” Kahn-Oren said. “We know that the presence of a sukkah on school property may herald the presence of other religious symbols. We must ask ourselves: How would we feel if there was a nativity scene at school? How would we feel if our children’s friends invited them to a warm meal and religious teaching during lunchtime at the crèche?”

Lewin told JNS.org that Kahn-Oren’s stance has been a common one taken by Jewish organizations and leaders, tracing back to a time when Jews faced greater intolerance in America than they do now.

“They are simply following the traditional view that Jewish organizations took years ago, that any display of religion on public property ends up proselytizing people,” he said. “Since they do not want to see nativity scenes or crosses, they thought that in fairness they should not have menorahs or other Jewish symbols either.”

But according to Lewin, “this is an outdated view by Jewish institutions that has been rejected by the courts repeatedly.”

“Those who raise these issues today are by and large senior citizens like me,” he joked.

Indeed, many of today’s younger Jews grew up in a country where public Jewish symbols are commonplace—particularly menorahs during the winter holiday season. This includes the famous “National Menorah” on the Ellipse, just across the street from the White House. The annual lighting of what is called the “world’s largest menorah,” launched by Chabad in 1979, is attended by thousands of people and is broadcast to millions of viewers across the world. This year, Vice President Joe Biden is slated to attend the menorah lighting.

Despite the episode in Milwaukee, most national Jewish organizations today do not take issue with the display of Jewish symbols in public. They consider the legal debate to be settled because the Supreme Court has allowed religious symbols to be publicly displayed as long as they don’t stand alone.

Similarly, the Anti-Defamation League (ADL) said in a statement provided to JNS.org that while it views the menorah as a religious symbol, the Supreme Court “has ruled that it can be publicly displayed alongside secular symbols like Christmas trees.”

“Therefore, we believe that the primary concern for government officials should be to respect our nation’s religious diversity by ensuring that whatever displays they authorize do not convey a preference for a particular faith or holiday,” ADL said.

Chabad’s Rosenfeld said it is a matter of pride that a Jewish American can now walk down the street and see the menorah displayed alongside other popular symbols.

“I can walk down the street knowing that I am proud to be a Jew,” he said. “And in fact the government does whatever they can to help us and encourages us to practice our faith. [We have] freedom of religion, meaning freedom to practice whatever religion we want, and freedom to do that and be proud of it.”