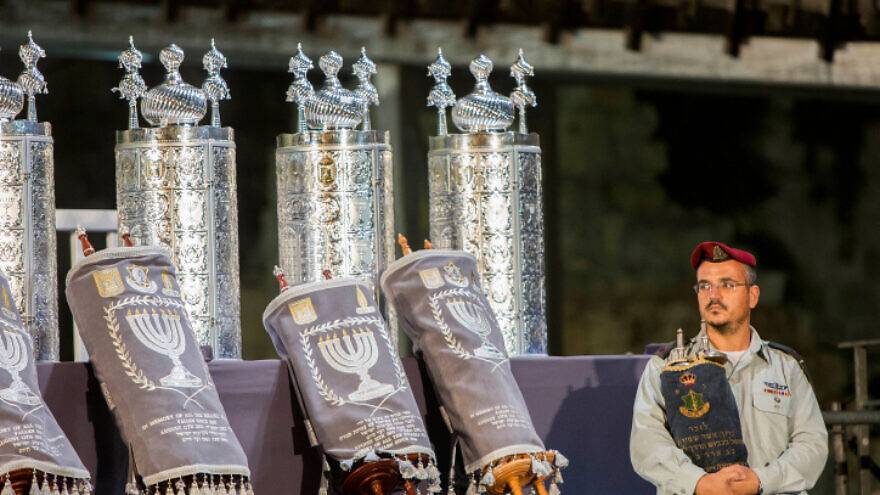 An Israeli soldier holds the Torah Scroll carried by Chief IDF Rabbi Shlomo Goren in the Six-Day War, during a ceremony with 75 Torah scrolls from around the world in memory of the soldiers killed in "Operation Protective Edge" and in Israel's wars, at the Western Wall in Jerusalem, on Aug. 12, 2015. Photo by Yonatan Sindel/Flash90.
Spread the word.
Help JNS grow!
Share now:

(July 20, 2022 / Israel Hayom) Hundreds of Torah scrolls, some more than 700 years old, are housed at a surprising location—a closed IDF base. Israel Hayom was allowed a rare look at the enormous storeroom at the IDF Rabbinate’s Shura base, where more than 400 Torah scrolls are being safeguarded.

“There’s nothing like this in the world. The sense inside is as if you’ve gone down a time tunnel through the history of the Jewish people,” said Lt. Col. Shoham Orkaby, head of the Military Rabbinate’s Halachah (Jewish law) department.

Because the scrolls are sacred, they cannot be displayed in a museum, and because they are housed on a closed military base, the general public cannot see them.

“We’re happy to tell the story of the largest holy ark in the world through you,” said Orkaby.

The scrolls are housed on long industrial metal shelves in a warehouse known as the “Torah Treasury.”

“We have scrolls that are 750 years old, written on parchment thicker than what exists today. There are few scrolls like these in Israel, and we have dozens,” said Orkaby.

Most of the Torah scrolls were used by Jewish communities that were destroyed. One was donated by Holocaust survivor Edward Mossberg after he took part in a Witness in Uniform delegation to Auschwitz.

“He bought the scroll from a Romanian peasant, who had hidden it in a barn, and made a cover for it that included the names of all the camps where his relatives had been, along with the numbers of those who survived. … Today, the scroll is used by the delegations to Poland,” said Orkaby.

Another Torah, known as “The Prisoner,” was taken into an Egyptian prison by an Israeli soldier captured in the 1973 Yom Kippur War. In 2000, then-president of Egypt Hosni Mubarak agreed to comply with a request by then-President Ezer Weizmann, and the scroll was returned to the soldiers.

“Sadly, they kept half of it, and symbolically, it was torn right in the middle of the Priestly Blessing,” said Orkaby.

Torah scrolls continue to arrive at the base.

“Every time we get one, we create its DNA, the story of its life, by researching its history and preserve it with awe because we understand what a treasure trove, what amazing things, we have,” said Orkaby.