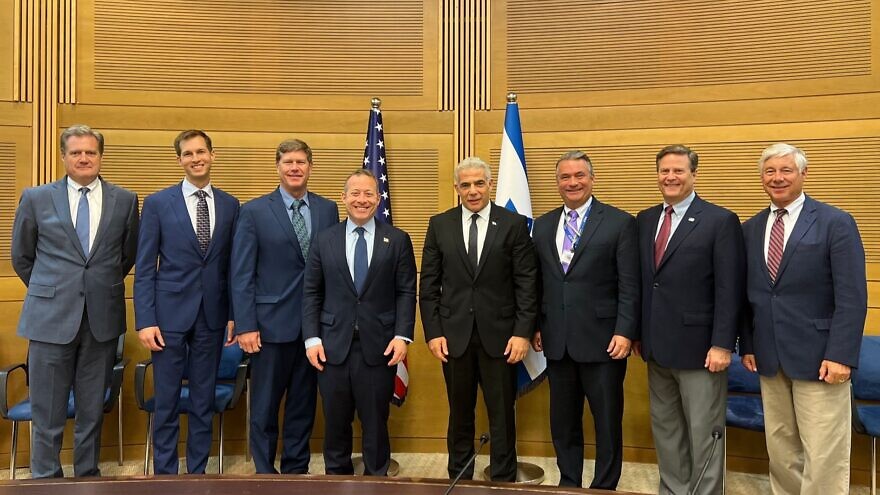 Co-leading one of his many trips to Israel with a bipartisan group of members of the U.S. House of Representatives, Rep. Josh Gottheimer (D-N.J.) spoke of the optimism he saw this week when meeting with government officials and civil society members.

The members were given briefings on every important topic, among them Lebanon, the Abraham Accords, Iran, Hezbollah and Hamas. They also and got to tour military installations and learn about Israel’s rocket and other military defenses.

Gottheimer described how historic it was to be present during the change of government on Wednesday, meeting with soon-to-be caretaker Prime Minster Yair Lapid and then Naftali Bennett on his last day as prime minister. They also met with opposition leader, former Prime Minister Benjamin Netanyahu, Ra’am Party leader Mansour Abbas and U.S. Ambassador to Israel Thomas Nides.

“I think being here for a change in government—literally watching it and meeting with all the major figures on the day of the transition—that was a pretty historic moment to watch up close,” said Gottheimer in an interview with JNS on Thursday while the group was on a bus leaving the Israel-Lebanon border after visiting a Hezbollah terror tunnel.

Major discussion topics included an imminent visit this month by U.S. President Joe Biden, the restart of negotiations on the 2015 Iran nuclear deal (the Joint Comprehensive Plan of Action, or JCPOA), the Abraham Accords, the Palestinian Authority, Ukraine, China, the anti-Israel BDS movement and anti-Semitism.

‘So many roadblocks to achieving an agreement’

Besides politicians, the group met with business leaders, in addition to those involved with startups and technology companies, discussing military and economic cooperation both with the United States and Israel’s new Arab allies.

Gottheimer said he was impressed by the optimism shown by all Israelis around the Abraham Accords, regardless of party affiliation.

“There’s a recognition among many that one of the best pressure points on the Palestinian Authority, which are not part of the Abraham Accords, is actually the success of the economic relationship and the security relationship in the region,” said Gottheimer, “and how that not just helps us, but that it could put indirect pressure on the Palestinian Authority to come along after they’ve been so obdurate for so many years.”

The group also met with Palestinian Authority Prime Minister Mohammad Shtayyeh and while he could not speak in detail about who said what during their private meeting, the members brought up the P.A.’s “pay-for-slay” program that rewards terrorism and also spoke about the death on May 11 of Al Jazeera journalist Shireen Abu Akleh during a gun battle between the Israel Defense Forces and Palestinians in Jenin, where she got fatally shot.

“I discussed the importance of turning over the bullet, and they seemed open to an independent investigation,” said Gottheimer.

Of course, conversations with Israeli officials about Iran and the JCPOA were unavoidable, and the Israeli position, he said, remained the same.

Despite the restarting of indirect negotiations for the United States and Iran to re-enter the JCPOA in Qatar, the change of venue from Vienna has not changed Gottheimer’s position on the deal.

“I still think there are so many roadblocks to achieving an agreement,” he said. “Obviously, one—given the conflict between Russia and Ukraine—where Russia was going to keep [Iran’s] enriched uranium to the timetable of the deal,” and a demand by Tehran to remove the Foreign Terrorist Organization designation from Iran’s Islamic Revolutionary Guard Corps.

“I’m opposed to it,” he said, “but aside from that, I don’t think there is a lot of forward momentum.”