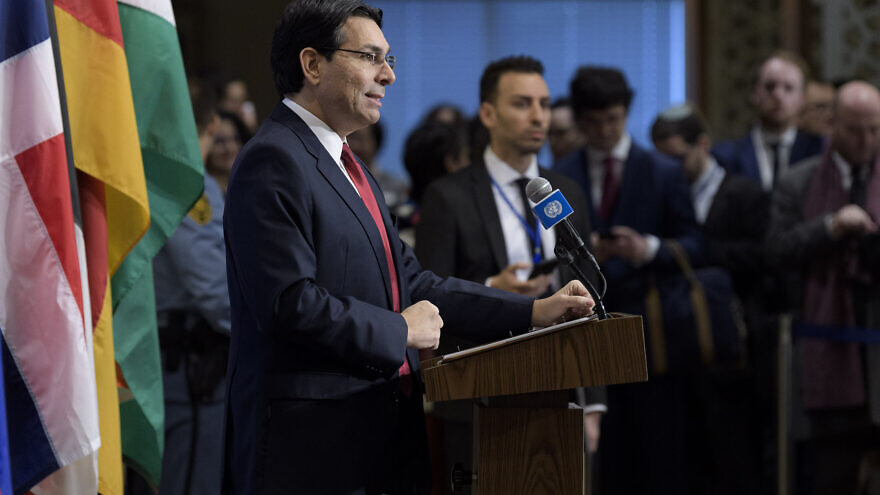 (October 4, 2021 / JNS) Former Israeli Ambassador to the United Nations and current chairman of World Likud Danny Danon is excited about another potential role, which he hopes will be as the new head of the Jewish Agency. A clearly ambitious man, Danon would like to combine his self-described passion and experience together with his vision for Israel’s immediate future.

And part of that vision, according to Danon, includes more youth being taught about Israel and Zionism, as well as an automatic voucher for any Jew who wants to move to Israel and avoid the currently lengthy and bureaucracy-laden aliyah process.

That choice will be made from among a number of candidates, including Intelligence Minister Elazar Stern, Deputy Mayor of Jerusalem Fleur Hassan-Nahum and former Israeli Ambassador to the United States Michael Oren.

Perhaps because of his right-wing bona fides, the media has deemed Danon a “controversial” figure, but in fact, Danon represents a large number of Israelis and Jews abroad who identify with his views.

Danon was also, for a time, considered by some to be a political rebel as he sought to trounce former Israeli Prime Minister Benjamin Netanyahu and helm the Likud Party. His image as “enfant terrible” of Likud led many in Israel to question his abilities as a diplomat, let alone the important and sensitive job of ambassador to the United Nations.

In August 2015, one left-wing Israeli newspaper published an article denouncing Danon’s appointment as “a shock” and declared Netanyahu (who appointed Danon to the position) was “essentially driving Israel’s diplomacy over a cliff.”

But judging by his successes at the world body, where he represented Israel for five years, Danon appears to have proved the doubters wrong, and he also seems to have mellowed, if even slightly.

While he may still have his sights set on the Likud leadership and perhaps even the prime minister’s chair, Danon is aiming, at least at the moment, for a less political, but perhaps equally strategic position.

The position of Jewish Agency chairman requires someone who can act as a bridge between Israel and the Diaspora. According to Danon, he believes he has the “experience and capabilities to be the ambassador both ways; to represent the Israelis to Jewish communities abroad and vice versa.”

“Today, we all talk about building a bridge between the communities in Israel and the Diaspora, and this is the best organization for that purpose,” he said, referring to the agency. “And the greatest challenge of Jewish people is reaching the younger generation. We have to start at a very young age to get them connected” to Israel.

He noted that “when you look at my resume, my skills, connections and passion, I think I can help connect the Jewish Agency with the younger generation.” 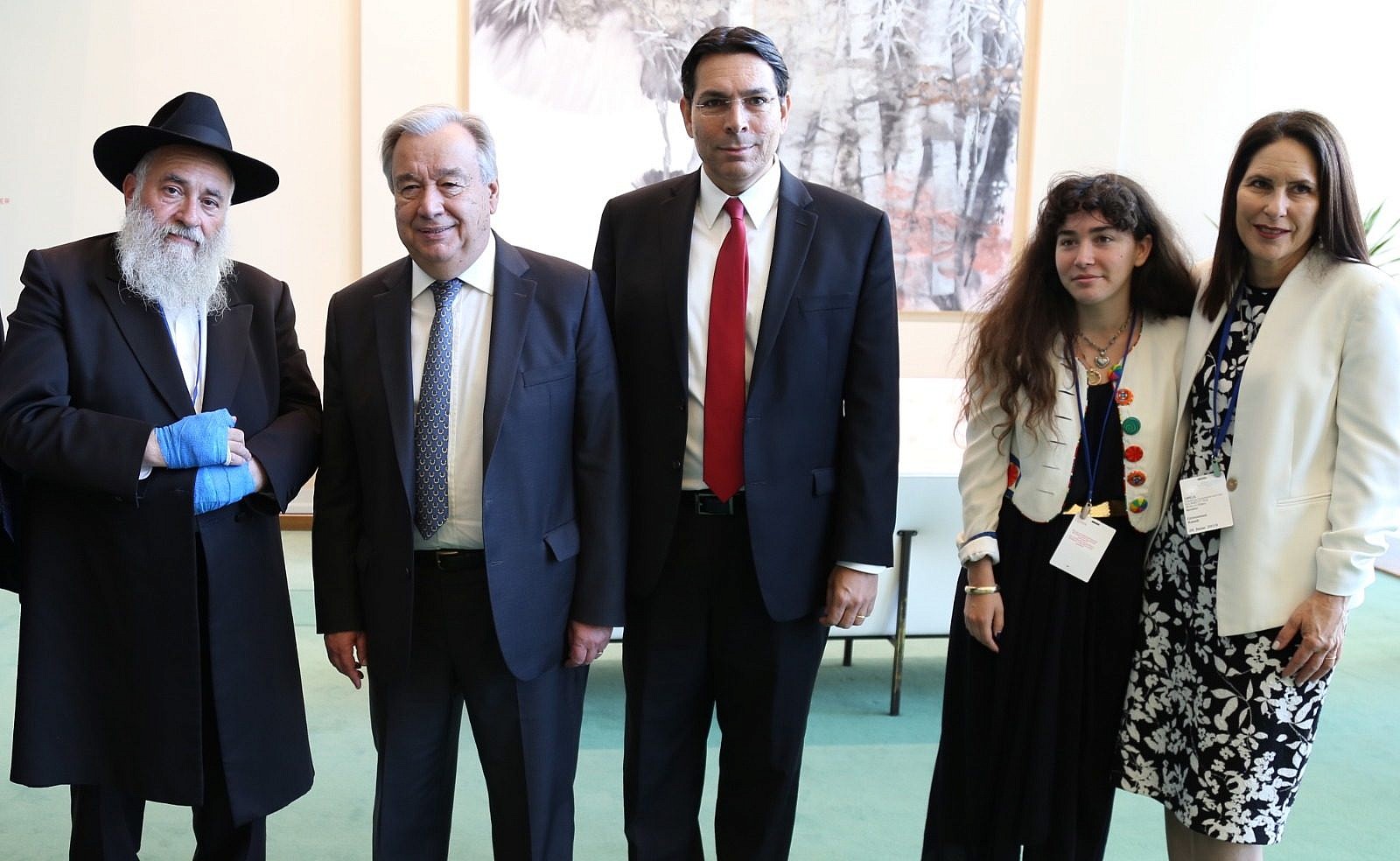 From left: Chabad of Poway Rabbi Yisroel Goldstein, U.N. Secretary-General António Guterres, Israeli Ambassador to the United Nations Danny Danon, and Hannah Kaye and Randi Grossman (the daughter and sister of Lori Gilbert-Kaye, who was killed in the California synagogue shooting. Credit: Israel Mission to the United Nations.

‘If there is criticism, let’s talk about it’

Danon was born in Israel in 1971 and holds a master’s degree in Public Policy and Public Administration from the Hebrew University of Jerusalem. He is married and the father of three.

Danon was a Knesset member from 2009 until 2015. He served as Deputy Minister of Defense from 2013 to 2014. In 2015, he was appointed Minister of Science, Technology and Space, serving until his appointment in August 2015 as Israel’s ambassador to the United Nations.

Whoever wins the post as head of the Jewish Agency will have his or her work cut out for them. Worrying reports have emerged that show Jewish youth abroad alienating themselves or feeling alienated from Judaism and/or the State of Israel.

The Pew Report, “Jewish Americans in 2020,” notes an alarming trend with growing polarization in regard to Judaism and Jewish identity, particularly among the younger generation.

A recent publication by the Jewish People Policy Institute (JPPI) suggested that “there is a widening ideological and attitudinal gap within the younger generation of American Jews between the growing population of ‘Jews of no religion’ and the growing population of Orthodox Jews, with a concomitant decline in Jews’ sense of attachment to Israel.”

JPPI also notes that during Israel’s 11-day ‘Operation Guardian of the Walls’ against Hamas in the Gaza Strip in May, “harsh criticism was voiced against Israel by several Jewish leaders … The more vehement and vocal the criticism, the greater the number of Israeli Jews who cease to see American Jews as reliable allies, and the greater the alienation between the communities.”

“I don’t accept those who say Israel is the problem,” said Danon. “If there is criticism, let’s talk about it. If there are issues, let’s solve them.”

“I found on many occasions the problems exist among the leaders and not the people,” he said. “In the communities abroad, some rabbis or politicians create conflict but it does not reflect the reality on the ground.”

Danon noted that Jewish summer camps bring Israeli teenagers to bolster their pro-Israel activities, and this helps both sides get to know each other. 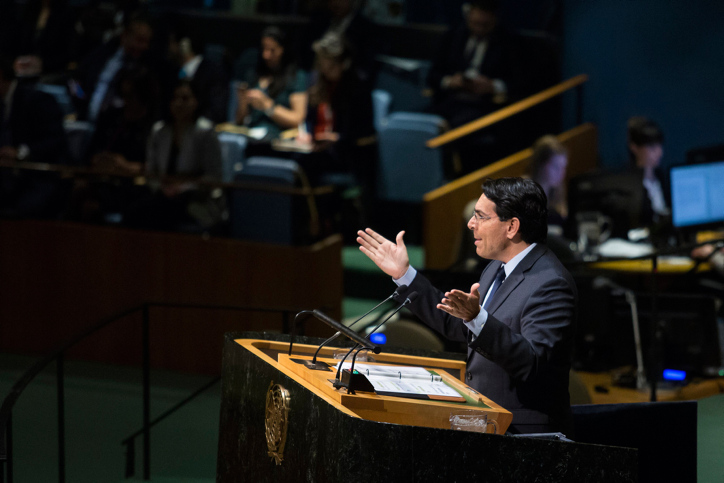 ‘We should create incentives for Jewish families to visit’

Danon also noted that many baby-boomer generation Jews have never visited Israel. “We should create incentives for Jewish families to come and visit Israel,” he said.

Addressing the anti-Israel BDS movement, Danon said he does not think it is a lost cause.

“It is an ongoing fight,” he said. “Today, with technology and social media, hate spreads much faster. It is easier to spread hate, and it is challenging. We should stand up and fight it.”

“Hatred of Israel and anti-Semitism is not going away,” he added. “Anti-Semites don’t care if we are Orthodox or Conservative or Reform. They don’t care where we live. They hate us, period.”

Danon also said Israel should be worried about the progressives in the U.S. Democratic Party. The fact that there has been a recent discussion in Congress about removing funding for Iron Dome, Israel’s missile-defense system, shows there are elements who consider Israel a problem.

Danon recalled a time when he was in negotiations with a Muslim country, and at the end of negotiations, it decided not to move forward. He asked his counterpart why and he explained it was better for his leader to attack Israel to get more votes and donations rather than move forward with Israel.

That’s when Danon realized that sometimes actions against Israel or a rebuff of Israel is not about the issue itself, but a tool to attract votes and funding.

“I am afraid that what is happening today in the Democratic Party is about that,” he said. “When I look at the instigators, I don’t see depth. They don’t really care about the Palestinians, the issue or promoting peace. They care about attracting the media, votes and money. And that’s a problem for us. We shouldn’t be quiet about it. We should encourage our friends and allies on both sides of the aisle to take a strong stand against it and push back. Otherwise it can become a movement. It is easier to build on hate today than on a positive agenda.”

One idea Danon has that he would like to see implemented at the Jewish Agency is a universal automatic voucher for any Jew who wants to move to Israel.

“Today, a shaliach [aliyah emissary] will not speak to you unless you give him a date when you want to move to Israel,” he lamented. “It is a mistake. We should open an automatic online file for every Jew who may want to come eventually.”