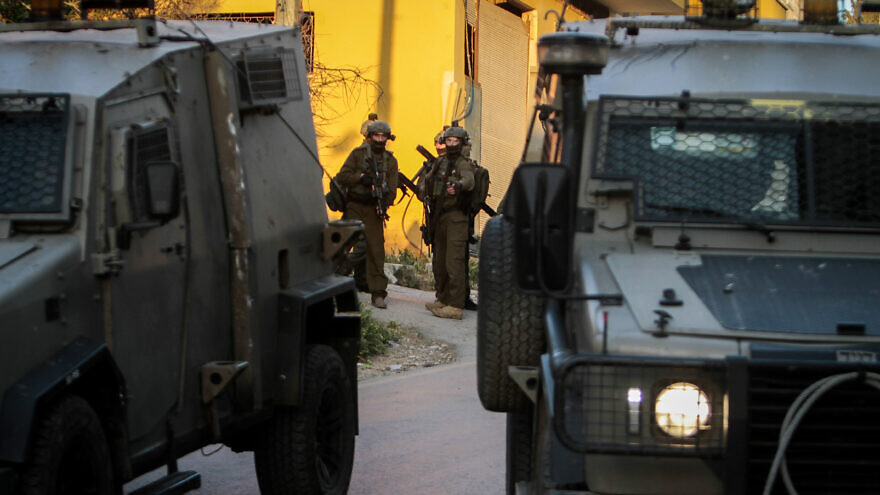 Israel Defense Forces soldiers during a raid on the house of Palestinian Musab Akef, a Hamas activist, in the village of Salem, east of the city of Nablus in the West Bank, on April 20, 2022. Photo by Nasser Ishtayeh/Flash90.
Republish this article
893 WORDS
Spread the word.
Help JNS grow!
Share now:

(April 28, 2022 / JNS) Israel’s security forces worked in an intensive, integrated manner to disrupt the wave of terrorist violence that had afflicted Israel beginning in March and lasting through the first week of April.

A number of factors have now led to the current relative calm, a security source stated, listing those factors as firm enforcement in the form of hundreds of arrests, tens of administrative detention decrees, tens of investigations, hundreds of people questioned and many conversations with persons of concern.

Looking ahead, the Israeli defense establishment remains on high alert, while continuing to safeguard freedom of worship for all three religions, with the Israel Police displaying sensitivity, restraint and containment wherever possible. At the same time, the Israel Defense Forces has launched nightly counter-terror raids in the West Bank.

Nevertheless, Hamas has certainly increased attempts to ignite the West Bank; this boosted effort is clearly visible in its incitement on social-media networks. The coming days, therefore, look set to be tense.

The dangerous influence of Hamas’s incitement machine has acted as a major catalyst in the recent terror wave, and while the number of incidents has clearly decreased, the risk remains of further attacks, a senior Israeli expert on the Palestinian arena told JNS.

“The terror wave seemingly has no address, and most of the attacks look like the result of unorganized actions. In actuality, when one dives deeper, it is possible to see that the hands of Hamas are behind most of the incidents,” said Col. (res.) Michael Milshtein, head of the Palestinian Studies Forum at the Moshe Dayan Center for Middle Eastern and African Studies at Tel Aviv University, and a senior researcher at the Institute for Policy and Strategy at Reichman University in Herzliya (formerly IDC-Herzliya).

Citing Hamas’s “incitement and orchestration to terrorism in Judea and Samaria, and Jerusalem,” in addition to the recent rocket attack from Lebanon, Milshtein—a former adviser on Palestinian affairs to the Coordinator of Government Activities in the Territories, and ex-head of the Department for Palestinians Affairs in Military Intelligence—said “what is happening in my view is Hamas success in enforcing a separation of arenas. Hamas safeguards the quiet in Gaza but is ‘running wild’ in Judea and Samaria, and in Jerusalem, and this is something we must be alert to.”

He said Israel needs to think about how to condition economic gestures on the limitation of terror activities and incitement in Judea and Samaria in the future.

Milstein has published four books and dozens of articles on the Palestinian issue, as well as on Israeli-Arab society, strategic developments in the Middle East, Israel’s defense challenges and modern intelligence.

“The whole of the escalation over the past month is highly unique and even unusual. It has a range of expressions—lone wolf, terror organization and armed [Palestinian] attacks in Samaria, rioting on the Temple Mount, and a rocket ‘drizzle’ from Gaza and Lebanon,” he observed. “It is occurring in a number of arenas simultaneously, and it does not seem to have a clear reason. On the eve of the incidents, Israel made a discernable effort to safeguard the calm, enacting economic gestures, neutralizing the issue of Sheikh Jarrah and more.”

Unorganized terrorism sparked this wave, though these types of incidents have decreased of late, he noted.

“This year, unlikely in the past, Arab Israelis affiliated with ISIS sparked the escalation, which points to an affiliation that exists between events in the Palestinian arena and in the Arab-Israeli arena. These [terror attacks by unorganized Arab-Israeli terrorists] are acts without a framework, without instructions and without clear organizational belonging, but it is clear that succeeded in negatively influencing Judea and Samaria, and became a source for imitation for the Palestinian terrorists who launched attacks in Bnei Brak [on March 29] and Tel Aviv [April 7],” he stated.

A need to address the younger generation

In the past two to three weeks, a combination of factors came together to curb this variant of terrorism. Milstein pointed to the factors: the arrest by security forces of tens of ISIS affiliates who are Israeli citizens, alongside sweeping and unequivocal resistance to such acts voiced by the Arab-Israeli public, with the United Arab List party leading the condemnations.

“In Judea and Samaria, and in Jerusalem, the situation is more complex,” said Milstein. “Israel has succeeded in conducting preventative operations due to, among other things, excellent intelligence, but the ongoing incitement—mainly initiated by Hamas—means that the potential for these attacks has not vanished, and we should not be surprised if we see more of them in the near future,” he cautioned.

At a deeper level, these terror attacks reflect fundamental problems facing the young Palestinian generation, he added. The lone-wolf attackers “do not act because of social distress or economic discrimination. These factors exist all of the time in the background, and they illustrate the situation of the young generation, which is torn between worlds, lacking a horizon and subject to the severe influence of the social-media networks,” said Milstein.

While security-intelligence preventative actions are “effective against ‘mosquitos,’ meaning terrorists, they do not help to dry the whole swamp, which forms the problem of the young generation,” he said. “This requires treatment from Israel, mainly in the economic context by providing assistance in finding jobs, professional qualifications and focusing on projects that Israel encourages for the young generation.”