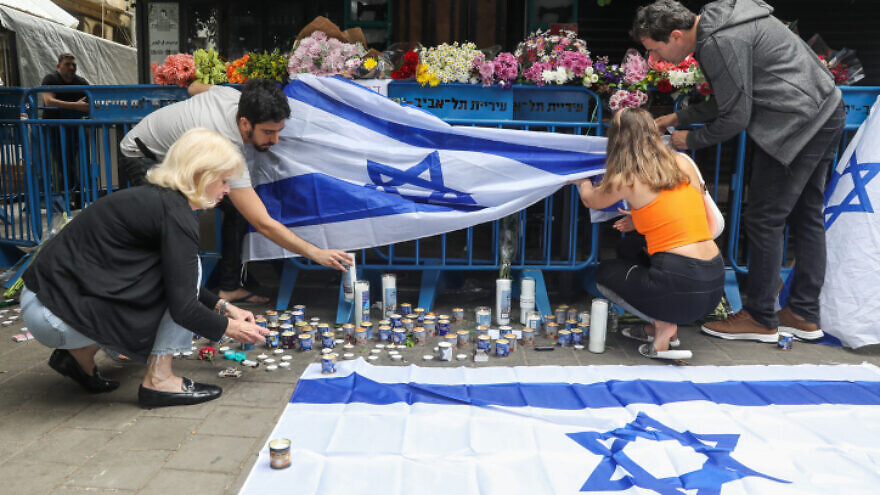 (April 8, 2022 / Israel Hayom) The two Israelis killed in a terrorist shooting at a Tel Aviv bar on Thursday night have been identified as Eytam Magini and Tomer Morad, both 27, from Kfar Saba.

Magini and Morad, who are childhood friends, will be laid to rest on Sunday.

Leonardo Romano, a friend of the two who was supposed to meet them at the bar where they were killed, said: “I have no words. They were great people and true friends. I just want to remember the good things about them.”

Ilan Grossman, another friend, said: “They got there first and saved places for everyone else. Everyone was on the way when the whole mess began. They didn’t answer for three hours. We realized it was them, but we didn’t want to believe it. They served in combat in dangerous places, and in the end, were murdered at a pub in Tel Aviv.”

The Kfar Saba municipality put out a statement saying, “We bow our heads in pain, and share in the sorrow of the families of the two murdered in yesterday’s terrorist attack in Tel Aviv.”

The city said that social workers had been caring for their families since Thursday evening and that “all of Kfar Saba is embracing them and hopes the wounded will make a speedy recovery.”

On Friday, 35-year-old father of three Barak Lufan, who was critically wounded in the terror attack, died at Ichilov Medical Center, stated the hospital. Lufan was a resident of Givat Shmuel and grew up in Kibbutz Ginosar. According to his social-media accounts, he was a coach on Israel’s Paralympic team and head coach of the Israeli national kayak team.

Tel Aviv Sourasky Center, Ichilov Hospital reported on Friday that the victims in the attack were still hospitalized, including three others who were out of danger and were hospitalized in various intensive care units.

‘We are in a difficult, challenging time’

Speaking at a press briefing at the Kirya military headquarters in Tel Aviv on Friday, Israeli Prime Minister Naftali Bennett praised the security forces who tracked and killed the terrorist who killed Magini and Morad, saying, “this was a 29-year-old terrorist from Jenin, and there was someone who helped him with the plans and with weapons. Anyone who helps [terrorists] will pay an unbearably heavy price.”

Bennett said he had watched footage of the terrorist’s father rejoicing and sweets being handed out in the Gaza Strip in celebration of the attack. “They want to break our spirit and our hold on the land. But they won’t.”

The prime minister said that Israel’s security forces had been given “full freedom of action” to put a stop to terrorist activity, and that “there are not and will not be any restrictions in this battle.”

“We are in a difficult, challenging time. The Second Intifada went on for years, but in the end, we won. We’ll win this time, too. Our enemies will take advantage of any opening and opportunity to attack us,” he said.

Israeli Defense Minister Benny Gantz spoke after the prime minister and said “we are in a challenging time, facing a spate of terrorist incidents inside the Green Line, along with operational sensitivities and alerts on and beyond our borders.”

Gantz said he wanted to express his appreciation for all branches of the security and defense apparatus, whose members have been working “around the clock” to thwart terrorist attacks.

He stressed that the IDF, the Shin Bet and the police will continue to work against terrorism and will step up operations. We’ve already made about 200 arrests, and if needed, we will arrest thousands.”