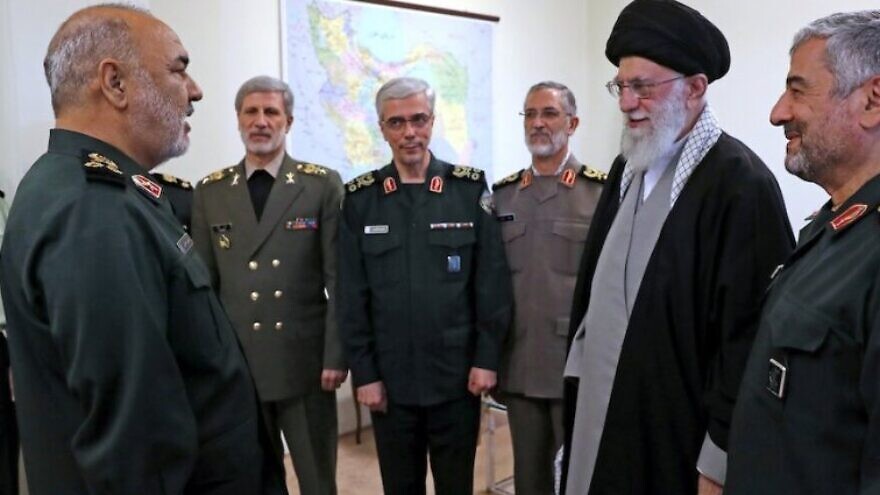 (August 23, 2022 / JNS) After months of stalled talks, it seemed as though the Iran nuclear deal was dead, with Israeli diplomats in April putting the odds of a new deal at “slim to none.” Then, last week, White House officials reported movement in the talks, attributing it to Iran’s dropping its demand that the Islamic Revolutionary Guard Corps (IRGC) be removed from the U.S. terror list.

Referring to Iran’s Aug. 15 response to a E.U.-proposed draft deal, in which Iran left out its demand that the IRGC be pulled from the State Department’s Foreign Terror Organizations list, a senior Biden administration told CNN on Aug. 19, “If were closer to a deal, that’s why.”

But how important is the IRGC terror designation if sanctions on the Islamic Republic are lifted as part of a new deal?

If sanctions are lifted, an estimated $275 billion will flow into IRGC coffers in the first year alone.

From there, “It will go to Hezbollah, the Yemeni Houthis, the Shi’ite militias in Iraq and Syria, and Hamas,” Bar-Ilan University researcher and lecturer Eyal Pinko told JNS.

It was difficult to understand the Americans’ logic, said Pinko.

“The U.S. is acting as if the IRGC is a separate entity from the regime, but it isn’t. The IRGC is part of the regime,” he said. “I suppose that by focusing on the IRGC the U.S. can project toughness in negotiations; to show that it’s sticking up for its values, but really it’s meaningless to separate the two—the regime from the IRGC,” he continued.

“First of all, the IRGC is the arm that protects the regime. It’s also the division responsible for crimes outside the country, from drug- to human-trafficking to terror attacks. In many cases, the IRGC was involved in attacks against the U.S,” he said.

It isn’t only experts that find the U.S. attitude puzzling—Iran itself said the U.S. was overstating the concession.

Seyed Mohammad Marandi, an adviser to the Iranian negotiating team, tweeted on Aug. 20 that “removing the Guards from the U.S. Foreign Terrorist Organization list was never a precondition or key demand. … But if the U.S. needs to say this to sell the deal, that’s their business.”

Yoel Guzansky, a senior research fellow at the Tel-Aviv based Institute for National Security Studies (INSS), told JNS that it’s natural that the IRGC would downplay the issue, but that at the same time, Washington is making much of it to placate its Middle East allies, who are worried the new deal will replicate the worst aspects of the first.

The first deal, struck in 2015, provided Iran with a financial windfall that it used to bolster its terror proxies in Yemen, the Gaza Strip, Lebanon and Syria. In 2019, then-Ambassador to the United Nations Danny Danon said that Iran spent $7 billion annually on terror in the Middle East.

The IRGC issue “is something that the U.S. can show its allies in the region. It can say, ‘Look, we also think about Iran’s actions regionally, not just about the nuclear threat. We take care of your interests,’” said Guzansky, who served on Israel’s National Security Council coordinating work on Iran and the Gulf.

He expressed doubt, however, that U.S. allies would be convinced.

“There’s a lot of skepticism among the Arabs in the region, even after Biden’s visit to the region, maybe even especially after his visit,” he said, noting that they see the United States as empowering Iran and seeking to reduce its own presence in the region.

Israel, which has made no secret of its opposition to both the first nuclear deal and the possibility of a second, is also voicing its concern.

“I am troubled by the nuclear agreement that is taking shape,” Israeli Defense Minister Benny Gantz said on Monday, according to Channel 12. “There are many holes in it both in the areas of enrichment [of nuclear material] and in the areas of [nuclear program] development, in the areas of weapons production, transportation, in terms of the time frame and in the large amount of resources that will enter Iran. That is why we are against the agreement.”

Israeli Prime Minister Yair Lapid last week urged Washington to walk away from the deal, saying the U.S. administration was crossing its own red lines, Axios reported on Aug. 18, and a senior Israeli official told Ynet on Aug. 20 that Israel hoped there was still time for the United States to change direction. “We hope it’s reversible,” the source said.

Guzansky said he doesn’t think Israel can do much to stop a deal, which he foresees happening. He said Israel’s statements ahead of the deal are in part designed to maintain its “freedom of maneuver,” meaning that should a deal come about, Israel is reserving for itself the ability to act against Iran.

“Israel can say, ‘We objected. They didn’t listen to us. We can do whatever we want,’ which is fair enough,” he said.

Bar-Ilan’s Pinko, who also believes a deal will be signed, said a nuclear Iran is a “huge problem” for Israel. “Any moves Israel will make against Iran or against any of its allies, for example, any proxy organization, will immediately trigger the Iranian nuclear deterrent,” he said. “It will make it much easier for Iran to act using conventional military means.”

“Things that we could react to now, we will not be able to do anything about in the future. Our hands will be tied because of the nuclear threat,” he said.