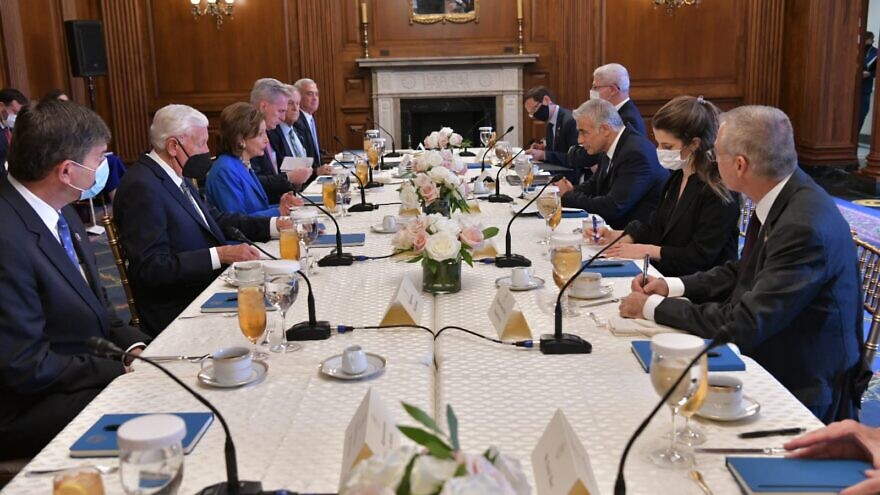 (October 12, 2021 / JNS) On the first of a three-day visit to Washington, Israeli Foreign Minister Yair Lapid made his rounds in Congress on Tuesday, highlighting the Israeli government’s push for bipartisan support for Israel in the United States.

Lapid met with a bipartisan group of U.S. House of Representative members in the early afternoon and held a brief press conference in a Capitol hallway with House Speaker Nancy Pelosi (D-Calif.).

Pelosi began by saying that the U.S.-Israeli relationship has always been and remains bipartisan, stemming from mutual values between the two nations and national interests.

She said she was looking forward to meeting Lapid again because her father, who also served in Congress, pushed for the establishment of the Jewish state. 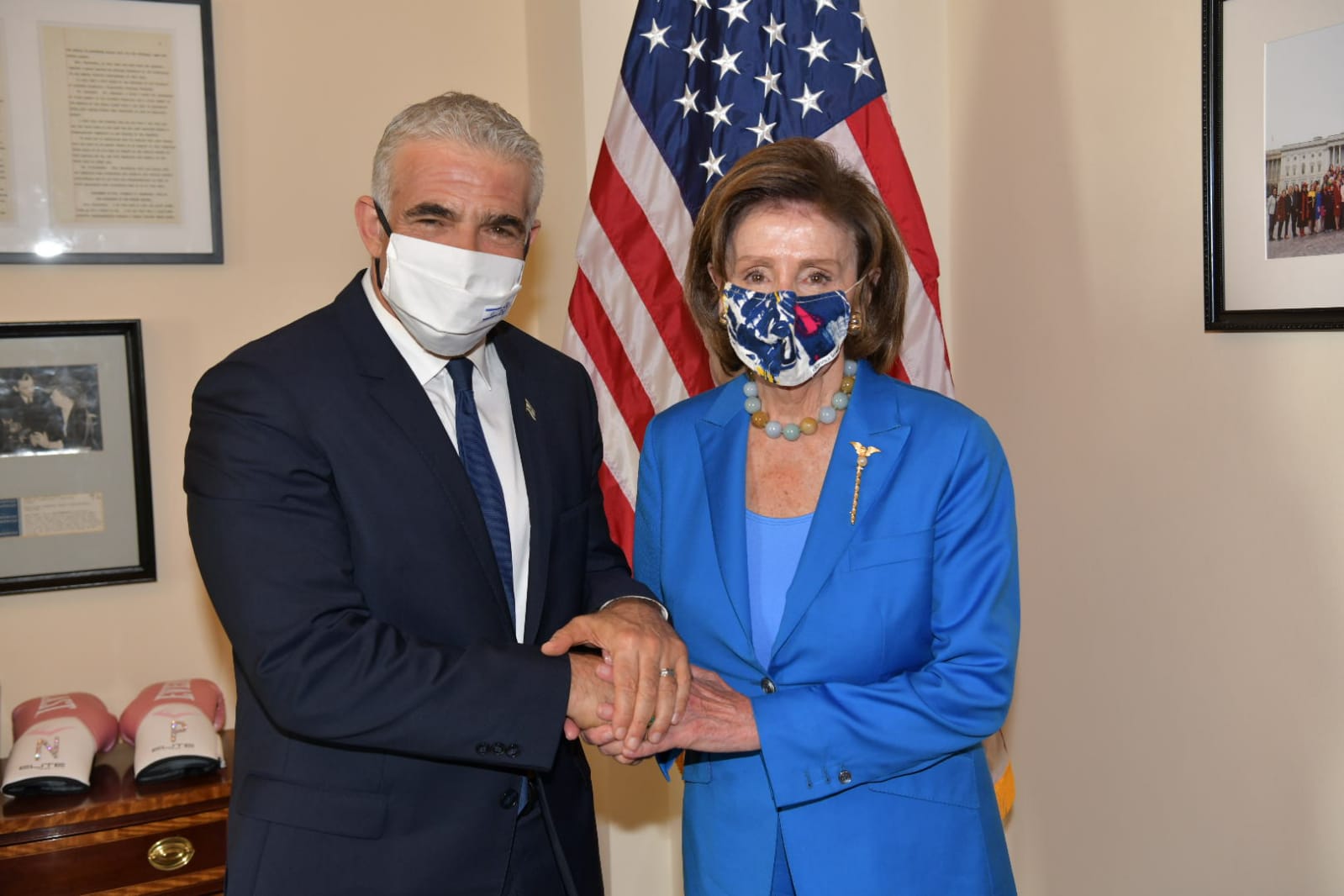 Pelosi said she vividly recalled meeting Lapid two or three years ago when she served as House Minority Leader, and Lapid visited Congress as a member of the Knesset.

Lapid followed Pelosi’s remarks, calling her a great friend of Israel. “… There is a special relationship between our countries, and you are one of the biggest supporters of the concept that says being pro-Israel is being bipartisan,” he said.

He also expressed appreciation to Pelosi for shepherding additional funds for the Iron Dome air-defense system through the House.

Earlier in the day, the foreign minister met with National Security Advisor Jake Sullivan; according to Lapid’s Twitter, much of the conversation focused on Iran.

“We discussed a number of security issues—namely, the Iranian threat,” Lapid tweeted. “I shared with him Israel’s concern about Iran’s race towards nuclear capability, and that Iran is becoming a nuclear threshold state.”

Lapid said he also talked with Sullivan about the need for an alternative to the plan by the United States to re-enter the 2015 nuclear deal and plans for economic recovery in the Gaza Strip, which he called “Economy for Security,” as well as strengthening the U.S.-Israeli relationship. 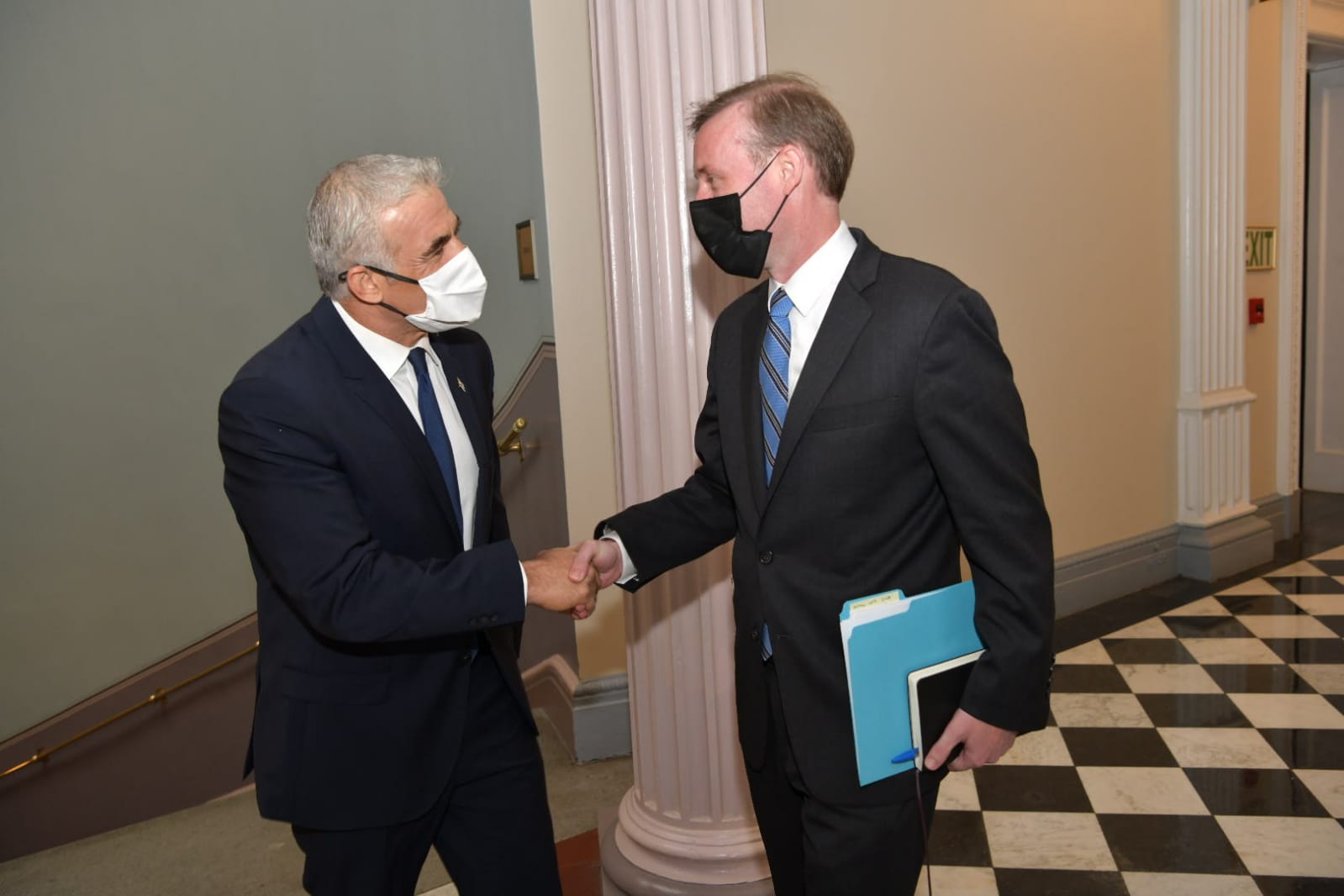 According to a readout from the White House, Sullivan also reaffirmed the Biden administration’s commitment that Iran never obtains a nuclear weapon.

“The officials agreed that the United States and Israel will continue to consult closely on Iran and other critical matters impacting the security and stability of the region,” it read.

The two also discussed “deepening Israel’s relationships with the United Arab Emirates, Bahrain, and Morocco. They agreed that the United States and Israel would continue to work closely together to strengthen and expand peaceful relations between Israel and countries in the Arab and Muslim world.”

Concluding his day, Lapid met with Vice President Kamala Harris, where he once again focused on Iran and strengthening bipartisan support for Israel.

“I’m happy to be here with one of the best friends Israel has in Washington—a leader that’s been next to us in all the important struggles, and we can always count on—we could always count on you in the difficult moments,” Lapid told the vice president.

“It’s true that the center of my visit is the Iranian nuclear program, but it deals with one more thing, which is strengthening the bipartisan relation with the next generation of young Americans,” he said, noting that the younger generation “is not only preoccupied with wars and conflict, but also with the climate crisis, the global immigration crisis, and questions of identity.”

“And in order to build a strategy for the next hundred years, we need to explore together those issues and to shape together a new world, new global architecture.”

Harris said that they would focus on “the issue of peace, security, and prosperity for Palestinians as well as Israelis, and, of course, the regional challenges that we face and our shared concern as it relates to Iran and as it relates to our support for the Abraham Accords.”

On Wednesday, Lapid is expected to meet with Secretary of State Antony Blinken, as well as the United Arab Emirates Foreign Minister Sheikh Abdullah bin Zayed. They are expected to hold bilateral and trilateral meetings to discuss the Abraham Accords last year, in addition to regional security and stability, according to the State Department.