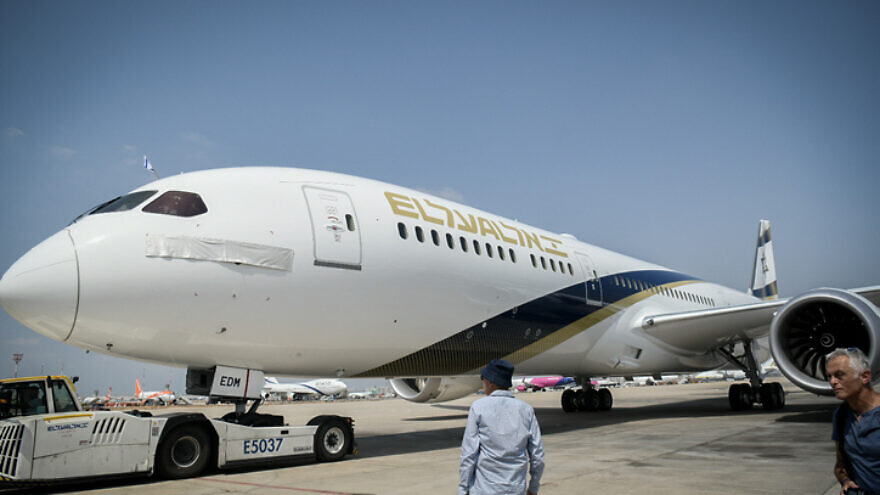 (January 14, 2020 / Chabad.org/News) Not long after El Al Flight #26 took off from Newark International Airport for Tel Aviv on Thursday night, there was trouble onboard. Smoke began to fill the cabin, and the plane was forced to make an emergency stop in Halifax, Nova Scotia, Canada. Since El Al does not fly on Shabbat, the 157 passengers and crew were stranded, but as in many places around the world, Chabad leapt into action to make their Shabbat a meaningful one. Passenger Barry Schechter, on his way to his first visit to Israel, sent the following heartfelt note of appreciation to Rabbi Mendel and Bassie Feldman, co-directors of Chabad-Lubavitch of the Maritimes.

On behalf of my family and everyone else on board El Al Flight #26, I would like to thank you and the rebbetzin for your incredibly gracious, generous and heartfelt hospitality in Halifax. I know I speak for all of us when I say we literally could not have made it through Shabbat without you.

When we were told by the pilot that our Newark to Tel Aviv nonstop would be making an actual stop due to mechanical difficulties, we were certainly taken aback. For many of us, Shabbat was the first worry, as we landed in Halifax late Thursday night. We imagined davening [praying] in a hotel conference room at best and an airport lounge at worst.

But once El Al told us that they had made contact with Chabad, a cheer rose up from the plane.

Only later did we learn that in addition to preparing a large amount of food to accommodate the many passengers, and being instrumental in coordinating the generous shipment of meals (from very caring askanim [“communal activists”] in Montreal) delivered by wonderful yeshivah bochurim [“yeshivah students”] Yossi and Dovid, you even helped organize the buses and hotels, and many other details. 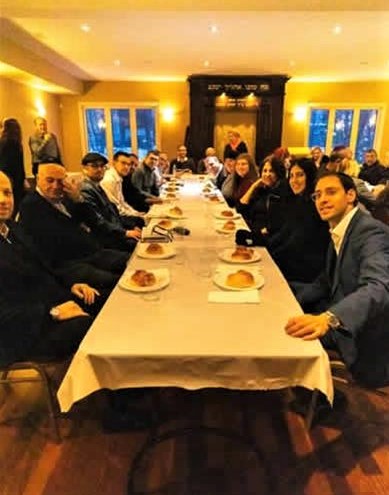 Passengers stranded in Halifax, Nova Scotia, sit down for a festive meal before the onset of the Jewish Sabbath. Photo by Eran Aloni/Chabad.org News.

Friday night was emotional, to say the least. With campus students gone for vacation, we had a beautiful minyan [“prayer quorum], and the davening [“prayers”] and zmirot [“songs”] were quite literally overwhelming. As we sat down to eat a sumptuous meal, you and others gave beautiful divrei Torah [“Torah insights”] that touched us all.

When the El Al staff arrived to give us updates and their first concern did we eat enough, we knew that we were dealing with a Jewish airline. And when they said we were in good hands with Chabad, they were right.

My wife Allison and my daughter Dora agreed as we walked back that this was the definition of turning lemons into lemonade.

Saturday morning was a more intimate affair as some of our group walked to the local Orthodox shul to help augment their minyan, and the rest of us joined you. Then we all came together from both minyanim to eat another great meal.

We had Mincha and then we took our leave back to the wonderful Lord Nelson Hotel, whose staff could not have been better.

After a couple of hours of sightseeing, we davened Maariv at the hotel, did an impromptu Havdalah and boarded our buses back to the airport.

I write to you as we are over the Adriatic Sea, according to the screen keeping me awake above my head. G‑d willing, Allison and I will be seeing Eretz Yisrael for the first time as we visit our twins Max and Eden, who are learning at Lev HaTorah and Machon Maayan, respectively. Dora is back after her year at MM [Machon Maayan] as well.

We will be seeing family and friends, G‑d willing, all over the country. Of course, the irony of another Mr. Magoo moment for me does not escape those who know that the twins were born on Sept. 11, 2001, which is why I was not at the World Trade Center that day.

Regards and we hope to see you, as we hope to see all our new friends in good times, in Canada, the U.S. or Israel, perhaps with the coming of Moshiach! Amen!

This originally appeared on Chabad.org/News.