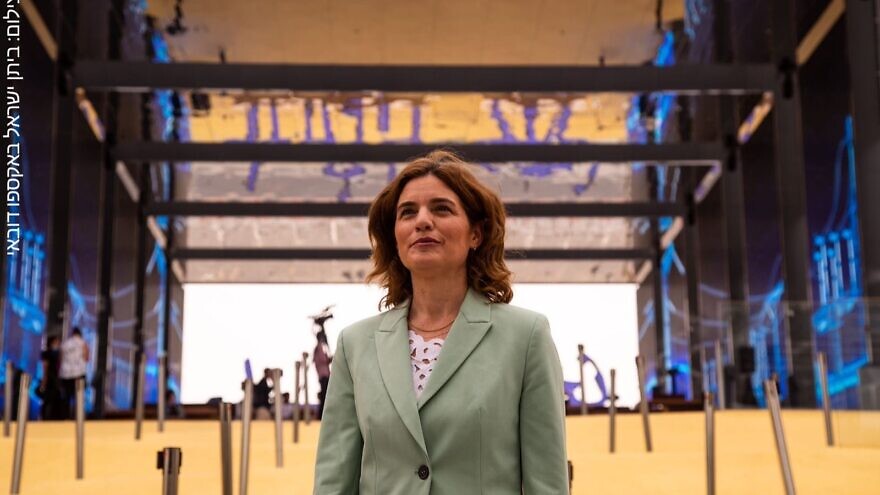 (November 1, 2021 / JNS) Part of a 140-member Israeli delegation to Glasgow, Scotland, to attend the 26th U.N. Climate Change Convention, Environment Minister Tamar Zandberg tells JNS how she assesses the role that the Jewish state can play in the global effort, and the environmental and economic benefits it will bring to the country.

Q: Israelis generally don’t take environmental issues seriously. There is litter and illegal dumping. Water sources are dirty. Air quality is often poor. Why start addressing the environment on a global level, before tackling it on a local one?

A:  Where the climate is concerned, that which is global is also local. What we pollute on the ground affects the atmosphere. It affects the air we breathe, the land we walk on and the water we drink. And vice versa. The technologies we develop, the environmental awareness we create and the policies we establish to clean the beaches, the water, the air and the land will also help fight climate and weather changes.

Q: The new governmental focus on climate appears to Israelis to have developed very quickly.  How did that happen?

A:  First of all, Glasgow has been an anchor and a target that we have sought.  Also, I think the summer of 2021 has kind of been a wake-up call, due to all of the climate disasters that have happened all over the world, including in Europe, the United States and even in Israel.

We recently saw the Intergovernmental Panel on Climate Change (IPCC) report demonstrating that we have already crossed the irreversible point at which the climate will suffer irreparably. We can certainly mitigate some of the damage, but we cannot prevent an increase in global warming over the next several decades.

Q: What climate disasters, in particular, have occurred in Israel?

A: This year we had more wildfires than ever. There are predictions of floods. The rate of temperature increases is now three times higher than they have been in the last three decades.

Q: Are the fires attributable to climate change? Or are they a product of negligence and, in many cases, arson?

A: The climate doesn’t light these fires; there’s always the match that ignites the chain reaction. But the severity of the damage, how long it takes to put out a fire, and how dry the land is when a fire starts are questions of climate change. So, if at the end of the day, someone doesn’t completely extinguish the coals of his barbecue, or carelessly throws a cigarette into the brush, or even intentionally sets a fire—it is just the match on the top of the haystack. But the outcome of the fire is determined by the pre-conditions.

Q: How much of the climate change agenda is about the environment, how much about global finance, and how much is about a melding of the two?

Q: How does the new climate economy affect Israel?

A: Simply put: It has to. This is a directive that Prime Minister Naftali Bennett has given to the current government. Israel is positioned very well to become a leader in the innovation of green technologies. We already are leaders in food-tech, agrotech, water treatment and solar energy. And we are in a very good position to become world leaders in energy storage. This is an issue that we are going to focus a lot of attention on over the next several months.

Q: Over the past decade, Israel has become energy independent through the exploration and discovery of natural gas. Just a few years after this major source of energy emerged, why would the country want to begin a shift away from it?

A: Yes, we now have natural gas. But the reality of the climate is that we need to shift away from fossil fuels and natural gas to renewable energy. Currently, we have enough natural gas to sustain ourselves for the next few years. But now we need to invest heavily in renewables, so we will be positioned well to adapt to the global changes taking place.

Q: Was it a mistake for Israel to invest in natural gas?

A: No, those investments were right for the time. Ten years have passed since we started, and we have many years to use the gas that we’ve already have explored, found and utilized. But now we need to go to the next stage, which is renewables.

Q: Why is the current Israeli government taking climate change more seriously than its predecessor?

A: Because it’s 2021. The world is changing. Listen to the scientists. Read what the world economists are saying. Israel cannot afford to be left behind.

Q: The previous Israeli government was working alongside a U.S. administration that withdrew from the Paris Climate Agreement. How has U.S. President Joe Biden’s reentry into that accord affected Israel’s calculations?

A: It hasn’t just affected Israel; it has affected nations globally. The United States is a world leader, and its decisions in this regard have affected everybody.

Q: How much money can the global shift to a climate-centered economy bring to Israel via investments in local technologies?

A: I really cannot tell you. I see the presentations of economists, and their graphs show an exponential curve in revenues—one that looks similar to the curve of COVID-19.