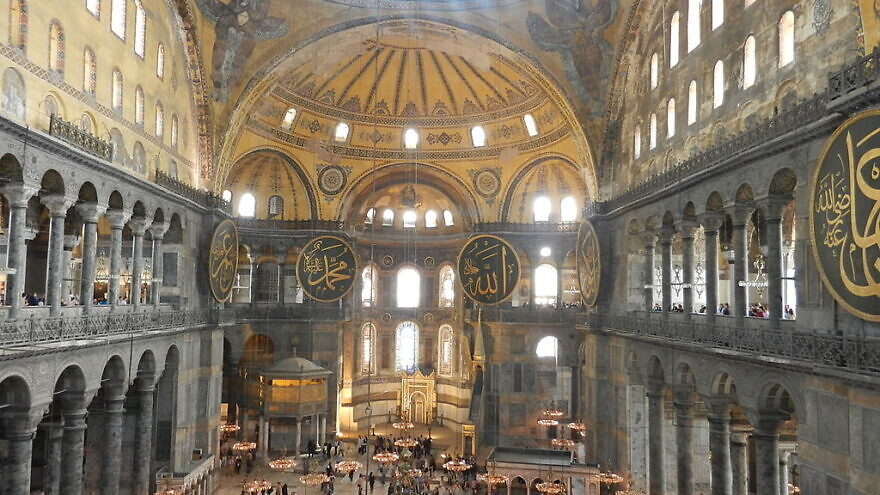 (July 12, 2020 / JNS) Turkish President Recep Tayyip Erdoğan vowed on Friday that the “resurrection” of the ancient Hagia Sophia church in Istanbul as a mosque bodes well for the “liberation” of the Al-Aqsa Mosque in Jerusalem. He made the declaration during an event in Istanbul marking the official conversion of Hagia Sophia into a Muslim house of worship.

Hagia Sophia, a major tourist attraction listed by UNESCO as a World Heritage site, was built as a church in 537 C.E. during the reign of Byzantine Emperor Justinian and became the seat of the Orthodox patriarch of Constantinople until the Ottoman invasion in 1453, when it was converted into a mosque. Then, following the dissolution of the Ottoman Empire after World War I, Turkey’s secular leader, Mustafa Kemal Ataturk, converted the church-turned-mosque into a museum.

Erdoğan’s Islamist government has been planning to reverse the status of Hagia Sophia since 2013.

According to the pro-government Turkish daily, Yeni Şafak, Erdoğan said during the ceremony that the “resurrection of Hagia Sophia was the harbinger of the liberation of Masjid al-Aqsa [Al-Aqsa Mosque] and footsteps of Muslims’ will to leave hard days behind.”

Erdoğan announced at the event that the mosque will be open for Friday prayers on July 24.

His decision to reconvert Hagia Sophia into a mosque has been condemned by UNESCO, the United States, the European Union and the World Council of Churches.

Erdoğan frequently invokes the Al-Aqsa Mosque on the Temple Mount in Jerusalem to rally support in the Muslim world.

In a video message on social media on May 25, he said, “We will not allow Palestinian lands to be offered to anyone.”

In the video, which was addressed to American Muslims in honor of the Eid al-Fitr holiday marking the end of Ramadan, Erdoğan said, “I would like to reiterate that al Quds as-Sharif [the Temple Mount], the holy place of the three religions … is a red line for all Muslims in the world,” he said.

The appeal appeared to be an effort by Erdoğan to mobilize the American Muslim against the U.S. government’s decision to allow Israel to apply its law to the Jordan Valley, and parts of Judea and Samaria, in accordance with U.S. President Donald Trump’s “Peace to Prosperity” plan.