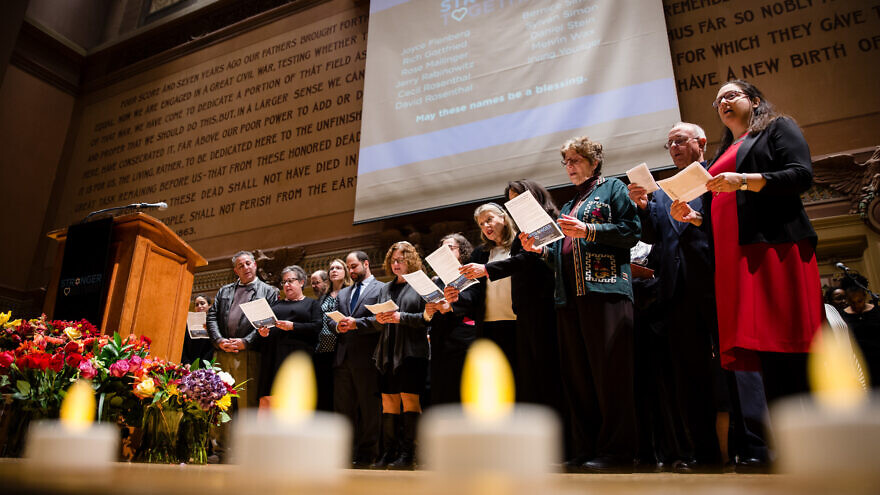 (October 28, 2019 / JNS) The mass shooting at the Tree of Life*Or L’Simcha Synagogue in Pittsburgh took place exactly a year ago this past Sunday, on Oct. 27, 2018, and the tragedy remains a lesson about combating hate and bigotry against world Jewry.

Considered the deadliest attack on Jews in American history, 11 Jewish worshippers, most of them elderly, were shot and killed by a lone gunman, 47-year-old Robert Bowers, during Shabbat-morning services. The synagogue invited people to partake in a “#PauseWithPittsburgh” moment of silence on Sunday at 5 p.m. in honor of the victims, and Pennsylvania Gov. Tom Wolf signed a proclamation declaring Oct. 27 as an official day of remembrance, ordering state flags to half-staff one year after the attack.

Tree of Life’s Rabbi Jeffrey Myers said in a video released days ahead of the anniversary, “For me to say this has been some year would be an understatement, but not necessarily for the ways you might expect. The unintended consequences of this horror are so incredibly positive and uplifting, something no one could have anticipated. … People discovered strength that they didn’t know they had and found some purpose in their life. … Still, it is easy to lose hope, and we seem to be drowning in an epidemic of mass violence with no end in sight.”

Myers said the root cause of the massacre—hatred—is “a four-letter obscenity” that he has removed from his vocabulary, explaining that “emotion-laden words frequently lead to emotional actions, even violence, such as the massacre in the Tree of Life. We must restore civil discourse in the United States, and it’s up to us—we the people—to do so. Therefore, I relegate the ‘H’ word to my mental wastebasket.”

He noted that “we will always be in the process of healing” following the attack. “For unlike a physical wound, this wound never fully heals. Reminders of that horrific day surround us. Each day we must integrate the trauma of that day into our beings. To emerge and engage in our new reality … I am fueled by faith and hope.”

Rabbi Marvin Hier, founder and president of the Simon Wiesenthal Center, told JNS that he’s been in touch with many religious leaders and locals in Pittsburgh, who have said they feel a more powerful commitment to their Jewish identity following the attack than they’ve ever had before. Those affected also expressed the need to be stronger and resilient against hatred.

“They see that we have no choice—that basically we have to speak out, and we cannot be lax about it,” he said. “Remember what happened in the period of [Nazi leader Adolf] Hitler; there were too many excuses when he started marching in the 1930s. People said, ‘Oh, it’s just a march.’ Everyone dismissed him as a passing phenomenon. We’ve learned from history that when you see these attacks, we have to be vigilant. We have to make sure that we express ourselves to our city officials, state officials, federal government officials, and we have to call upon the U.S. government to be very vigilant about anti-Semitism.”

He continued, emphasizing that “we did wrong in the 1930s. We thought it’ll end by itself, but we now know that hatred won’t go away by itself. It has to be chased away. … We have to attack the hatred and the bigots, and that’s the only way we’re going to be able to continue Jewish life. Not to allow them free rein, where they’re not confronted; where we don’t speak out against them. Otherwise, history [will] repeat itself.”

This year marks 100 years since Hitler’s first anti-Semitic writing about the Jews in 1919, in which he stressed the need for a “rational” and “scientific” anti-Semitism and “the irrevocable removal of the Jews in general.”

‘Pay attention to anti-Semitism on the right and the left’

Looking ahead, Holocaust historian, author and Emory University Professor Deborah Lipstadt believes that the current climate of anti-Semitism in the United States “has the potential to get worse.”

She told JNS part of the problem is that modern-day anti-Semites, including those who “might have previously never dared to publicly utter their hateful thoughts, feel emboldened to do so. In fact, they feel more than emboldened. They feel that there is a vast swatch of public opinion and of world leaders who—though they may not say so openly—are sympathetic with their white nationalism, which includes an anathema of Jews.”

She said the organized Jewish community “has to pay as much attention to anti-Semitism on the right—Pittsburgh, Poway and the many killers who have been thwarted—as it does to anti-Semitism on the left—the British Labour Party, incidents on campus, BDS, anti-Zionism. This is not a competition as to which side is worse: They are both very bad.”

Organizers at the Tree of Life recently announced plans to reopen and continue to use the building as a place of worship, as well as a space for classrooms, exhibits, social events and a memorial to commemorate the victims of the mass shooting. The reopening does not have a set date yet.

Sam Schachner, president of Tree of Life, said the rebuilding effort will be “victim-centered, collaborative, sensitive and caring,” and that they “will not let this attack destroy us.”

Hier believes that the synagogue’s name reflects the congregation’s strength, despite tragedy afflicting their community. He referred to the book of Proverbs, where it says: “She is a tree of life for those who take hold of her.”

That means, he said, “it can only be a ‘tree of life’ if we take hold of this, what occurred, and strengthen ourselves, fight back and never appease hatred. A tree of life on one condition: If we’re strong, get up, and fight these bigots and anti-Semites.”

He said, “I remain optimistic that humanity has a bright future, and a continued love that I encounter every day leaves me with hope. May we all have hope in our hearts and souls as we build bridges to better know our neighbors so that this doesn’t happen again.”