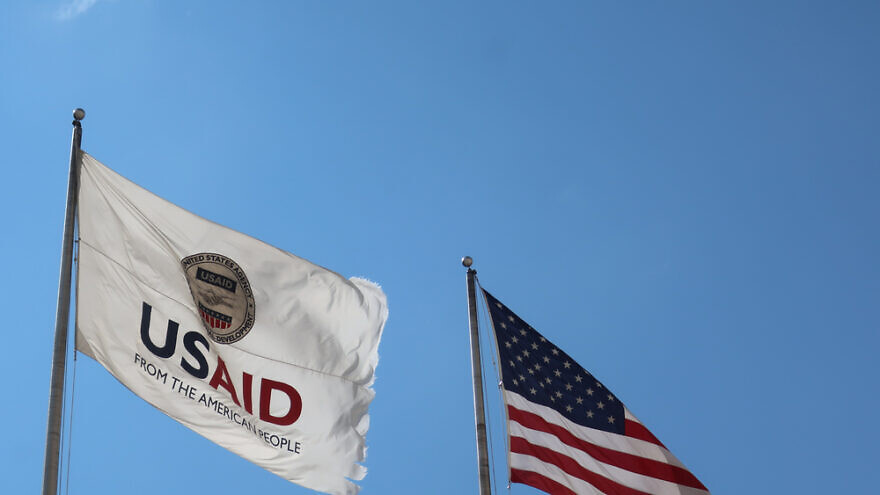 (February 10, 2022 / JNS) The Israeli-Palestinian conflict is always a hot-button issue in Congress, as members are often viewed as taking one side over the other in their votes and rhetoric.

On Wednesday morning, a board of experts appointed by Congress met for the first time, discussing conflicts of interests, as it began the process of doling out $250 million in congressional funding to joint Israeli-Palestinian dialogue programs and Palestinian business development. It will be one of the few government-related activities that will actively strive to bring Israelis and Palestinians together.

The U.S. Agency for International Development (USAID) announced the appointments last week of the Partnership for Peace Fund (PPF) advisory board. The board is set to issue recommendations on publicly submitted project proposals as stipulated by the Nita M. Lowey Middle East Partnership for Peace Act (MEPPA) passed by Congress in December 2020.

The board chair is George Salem, a Palestinian-American attorney who served in the Reagan and Bush administrations, and was foreign-policy adviser for Sen. Mitt Romney (R-Utah)’s presidential run in 2012. He previously served on the board of the now-defunct American Task Force on Palestine, a visible U.S. lobbying entity pushing for a two-state solution on behalf of the Palestinians. The PPF board he will lead currently includes 12 members who were appointed by leadership from both houses of Congress.

“What all of the board members have in common is a commitment to the success of MEPPA and a belief that people-to-people peace-building programs are critical to advance a peaceful co-existence between Israelis and Palestinians,” Salem told JNS. “We all believe in the power of people-to-people engagement because we know firsthand the value of open and honest dialogue with people who may not think like we do.”

Johnston told JNS that she believes the divergent views of the board will serve as a positive.

“We have experts with vastly different backgrounds, experiences and outlooks on the Middle East conflict,” she said. “The board brings different viewpoints together around the shared goal of peace between Palestinians and Israelis. I think that you are going to have people that are looking at this from different angles and pulling for what they believe is going to bring greater peace and prosperity to Israelis and Palestinians living in the West Bank.”

Johnston’s organization has worked on joint economic initiatives between Israelis and Palestinians, giving her added insight into what kind of programming could succeed.

“After decades of failed policy, there are a lot of people who really want to see the Palestinian people move out of poverty and low-income status into a more prosperous life. I’m not speaking for other board members, but in my 23 years of involvement in the West Bank, there is not a doubt in my mind that joint business and economic partnerships between Palestinians and Israelis is working,” she said.

“It is one of the primary solutions to the conflict,” she continued. “If you were to ask your average Palestinian what they want, they wouldn’t say, ‘We want war with Israel.’ What they would say is, ‘We want great schools for our children, we want jobs and business opportunities so our families can prosper, and we want institutions around us that people believe in, which will help us to improve our daily lives.’ ”

‘Handouts are not advancing prosperity’

The board is tasked to consult with, provide information to, and advise USAID and other U.S. government agencies on the efficacy of programming and partnership options to advance MEPPA’s goals. Salem said that means the PPF advisory board won’t be responsible for reviewing every proposed program, per se, but will advise USAID on the strategic direction of the Partnership for Peace Fund.

“History has instructed us that handouts are not advancing prosperity, and that we need to invest in those organizations that coalesce us around what will help business to prosper and succeed. For example, organizations that helps Palestinians train in their skill sets for business, how to run a business, how to partner in business … essentially building into a business movement between Palestinians and Israelis,” said Johnston, stressing multiple times during the conversation that she was speaking on behalf of herself and not the board.

“There are a lot of opportunities to empower civil society, build economic bridges and develop the private sector. I understand that USAID intends that all programs, regardless of sector, will have people-to-people components,” said Salem.

The rest of the board has been filled by appointments that span the spectrum of thought on the Israeli-Palestinian dispute—from former politicians to veteran White House officials, experts and a rabbi.

Gerber, a Fellow at the Jewish Institute for National Security of America, assisted in crafting the Taylor Force Act, which suspended U.S. aid to the Palestinian Authority over the P.A.’s so-called pay-for-slay policy that doles out payments to terrorists who kill and maim Israelis, in addition to families of terrorists killed by Israeli security forces.

House Minority Leader Kevin McCarthy (R-Calif.) has yet to select his appointment. There are also two spots that can be filled by representatives of foreign governments or international organizations.

Salem told JNS that the board likely will discuss this topic during its first official meeting, so chose not to speculate on recommendations for those slots.

The full meetings of the board will be open to the public and press, which bring its own set of complications, especially when discussing something as complex and emotional as the conflict.

“Naturally there are challenges in holding meetings publicly, whether that involves occasional grandstanding or difficulty speaking candidly. However, the importance of transparency in these discussions far outweighs the challenges. I’m confident that the board members’ shared commitment to the goal of building a sustainable peace between Israelis and Palestinians will keep us focused in the pursuit of this goal,” said Salem.

He added that “keeping dialogue flowing and our focus on the people whose lives will be changed by this work will be priorities for me as the board chair.”