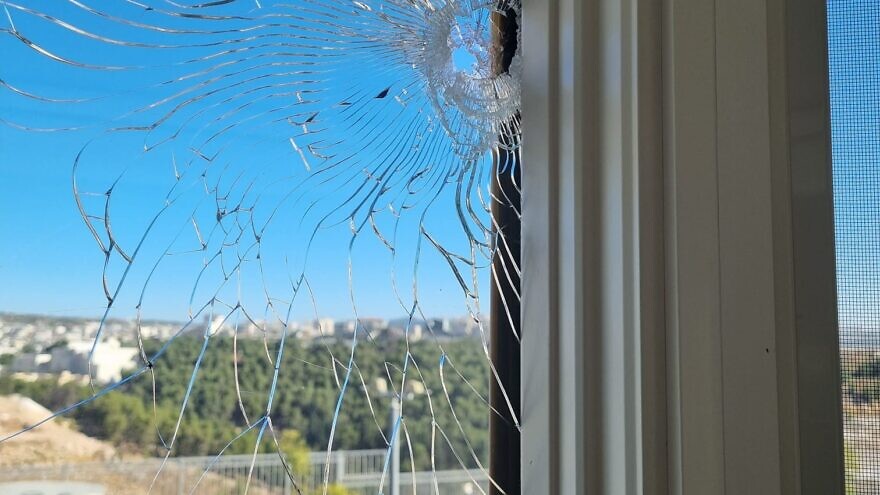 One of the bullets pierced a window in Michael Sperber's Efrat home, which was fired on from Bethlehem on July 25, 2022. Credit: Courtesy.
Republish this article
704 WORDS
Spread the word.
Help JNS grow!
Share now:

(July 28, 2022 / JNS) A house in Efrat was hit by at least eight bullets on Monday night, which the home’s owner says were fired by Palestinians from Bethlehem.

“At 11:00 p.m. on Monday night, massive shooting started in the direction of the Dagan neighborhood of the city near our house,” Michal Sperber, a family attorney, told JNS.

The shooting lasted six to seven minutes, said Sperber, adding that a friend filmed part of the incident on his cell phone.

“Afterwards, we just went to sleep,” said Sperber, a father of four, who was home with his wife and 8-year-old daughter at the time.

“In the morning I went downstairs and I see in the playroom on the ground floor the clear entry point of a bullet and a shattered and cracked window. I started to look for the bullet. I contacted the security center and then I went outside to look if there were other signs. I checked the other houses nearby,” he added.

In the meantime, security forces arrived, including the Israel Defense Forces and police.

“Ten to 18 bullets, or fragments of bullets, were found in all,” he added.

According to Sperber, this is the first time a house in Efrat has been struck by gunfire.

“We’ve heard gunfire more than once in the area but it was always relatively distant,” he said. “This time it was, to use professional lingo, directed fire with the intention to damage a target.”

He told JNS he isn’t convinced that he was the target, but added that “it was very strange; there were houses here that were much closer to the place from which the shooting came. The investigators found the shell casings and know where the shooting originated. They could have more easily shot the other houses but those weren’t touched.”

Israel Police Spokeswoman Shlomit Bakshi told JNS that she was not aware of the particulars of the incident, but said the shooting was likely not purposely directed at Sperber’s home.

Efrat Mayor Oded Revivi told JNS that such events do not happen frequently and it indeed might be the first time a house in Efrat was hit by gunfire. He said the municipality is taking the incident “extremely seriously,” adding: “I’m personally following this incident to make sure the security forces are investigating it with the same level of seriousness that we take it.”

However, Sperber’s neighbor Eytan Morgenstern expressed frustration at what he described as the blasé attitude of the municipality and the police.

“There’s been shooting almost every night in Bethlehem; shooting in the air. I think it was last Thursday [July 21] that the city council sent out an announcement that in Bethlehem the matriculation exams are coming up so there’s going to be fireworks and so on, and so, nothing to worry about, which I think is ridiculous because it’s not just fireworks, it’s almost always shooting as well,” he said.

In a Wednesday post, the city acknowledged the “unusual” shooting, “intended to hit houses in Efrat.” It repeated its warning that more shooting should be expected.

“In Efrat, we sometimes hear the echoes of gunfire and fireworks from the area of Bethlehem and the nearby villages. … The reasons for shooting can vary from the release of a prisoner/ a wedding / an apology or a quarrel / matriculation results and more,” the Wednesday statement read.

Morgenstern said, “In my view this is primarily an issue of poor deterrence. It’s the same policy here as in Samaria and on the Gaza border; ‘handling’ the conflict and being reactive rather than proactive.”

Sperber agreed, saying that the city wants to “bury the matter, to sweep it under the carpet,” likening it to the situation regarding illegal Palestinian construction in the area.

“Every entrance route to Efrat is blocked by dozens of illegal Arab buildings. Not a single one is legal and every one has a demolition order against it,” he said. “Everyone knows about the problem yet no one wants to deal with it.”