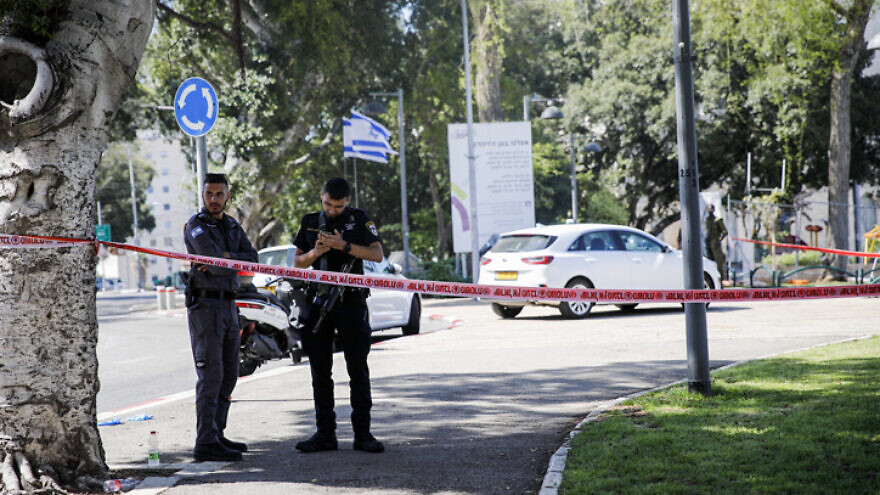 Police officers at the scene of a stabbing in Haifa, April 15, 2022. Photo by Shir Torem/Flash90.
Spread the word.
Help JNS grow!
Share now:

The victim, 47, said on Saturday that he had left his house to purchase something and was walking through a city park, enjoying the pleasant spring weather, when he sustained a sudden blow to the head.

“I didn’t understand what it was, then I saw it was a big rock. I turned around and saw a girl standing there, with a keffiyeh wrapped around her face, holding a knife,” the man said.

“She came up to me and I fell on my back. She shouted something in Arabic, and I recognized the word ‘Palestine.’ While I was still on the ground, I started to fight her off by kicking, which is why I have a wound on my leg. I started to cry for help. Two Arab guys arrived and talked to her, and tried to stop her,” he said.

“She kept shouting at me in Arabic, and approached me, holding the knife. Then the police arrived, and so did her father. He cried and shouted at her. Then an ambulance came and took me to the hospital. I was afraid she would kill me, and now I’m afraid to leave the house,” he added.

Rambam Medical Center in Haifa reported that the man arrived at the emergency room conscious and in stable condition, suffering from stab wounds.

On Saturday evening, the Haifa Magistrates’ Court remanded the teen until April 21. She is facing charges of attempted murder on ethno-religious grounds.

She is the eldest daughter of a former resident of the West Bank who worked with the Israeli security apparatus and now works for the Haifa sanitation department. Police searched her bag and discovered that she was carrying two more knives in addition to the one she used in the attack.

A senior police official who spoke to Israel Hayom said that the teen was “influence by the violent clashes at the Temple Mount and Al-Aqsa Mosque in Jerusalem and decided to take three knives and commit a terrorist attack. When questioned, she admitted she had wanted to stab Jews.”

According to the official, when her father learned about his daughter’s plan, he called the police and reported her. When officers arrived at the family’s home to collect evidence, reports came in over the radio about the attack in the park. The father drove to the park with the police, identified his daughter and pointed her out to them.

Police questioned the father and released him.