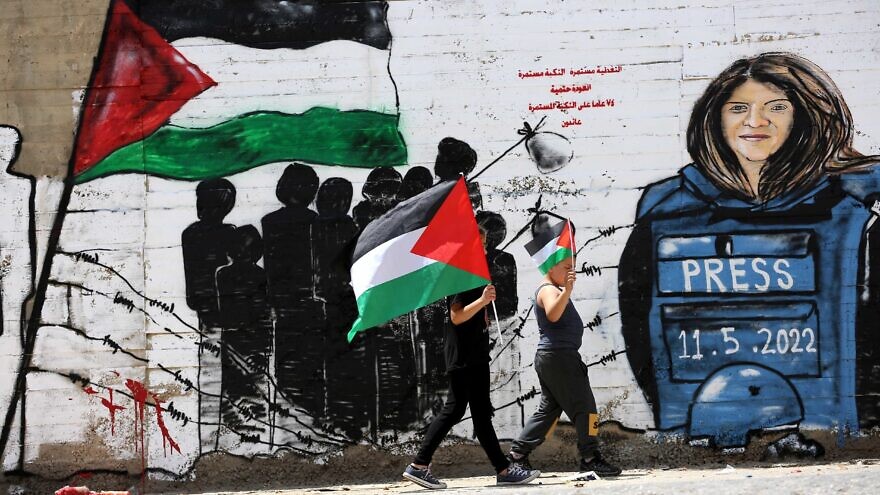 Palestinians walk past a mural of journalist Shireen Abu Akleh in the West Bank city of Bethlehem, on May 16, 2022. Photo by Wisam Hashlamoun/Flash90.
Republish this article
737 WORDS
Spread the word.
Help JNS grow!
Share now:

(November 16, 2022 / JNS) A decision by the FBI to investigate the Israel Defense Forces over the May 11 death of Palestinian-American journalist Shireen Abu Akleh in Jenin undermines the official positions of the Pentagon and the United States State Department, both of which welcomed the IDF’s own investigation into the matter, an Israeli expert on U.S.-Israeli relations told JNS.

Prof. Eytan Gilboa of Bar-Ilan University described the decision to launch the investigation as scandalous.

“Not only is it a vote of no confidence in the IDF’s investigation, but also in the Pentagon, since the U.S. Coordinator for Israel and the Palestinian Authority, Lt. Gen. Michael R. Fenzel, himself welcomed the IDF’s investigation. So, this activity by the FBI is undercutting the U.S.’s own position,” he said.

Gilboa, who is also a Senior Fellow at the Jerusalem Institute for Strategy and Security, noted that the IDF investigation had concluded that while an Israeli soldier likely fired the shot that killed Abu Akleh, the shooting was unintentional.

“If it was Israeli fire, it’s clear that it was an accident. The decision therefore to investigate is unprecedented,” said Gilboa. While the United States and Israel have cooperated in past investigations, such as the investigation into the Jonathan Pollard affair, such collaboration was justified, unlike this case, said Gilboa.

Israeli Defense Minister Benny Gantz on Tuesday called the U.S. Justice Ministry’s decision to investigate Abu Akleh’s death “a serious mistake,” adding that Israel would not cooperate with it.

Outgoing Prime Minister Yair Lapid insisted in a statement that Israeli troops “will not be investigated by the FBI or by any other foreign country or entity, however friendly it may be.” Israel had conveyed its “strong protest” against the move to Washington, he said.

According to Gilboa, the FBI’s decision harms American interests, too, by creating problematic precedents regarding unintentional deaths during armed conflicts.

“According to a study by Brown University published in September 2021, during the campaign known as the global war on terror, since 2021, 680 journalists were killed. A body known as the Committee to Protect Journalists found that 13 journalists were definitely killed by the U.S. military in Iraq. Washington said that its soldiers did not violate regulations in any of these cases,” noted Gilboa.

“In 2011, a Spanish court accused three American soldiers of killing a Spanish photojournalist, Jose Cuoso, in Baghdad, during the 2003 shelling of the Palestine Hotel. A Wikileaks document later revealed that the proceedings were dropped after diplomatic pressure was applied on Madrid by Washington,” he said.

“In 2007, U.S. Apache helicopters killed noncombatants, including two Reuters journalists. The U.S. can’t demand of us what it does not demand of itself,” he argued.

Gilboa described Gantz’s response as correct, saying that any cooperation with an FBI investigation would create a precedent.

“Israel has to stop this quietly, at a high level. Someone in the FBI took a decision to do this, and I’m not sure whether Attorney General Merrick Garland knew about this,” he said. “Clearly, the FBI has no authority in Israel and can’t investigate any [Israeli] soldier. The entire issue has [already] been examined in any case.

Even if one assumes that it was indeed an Israeli bullet that killed Abu Akleh, it’s obvious that her death was an accident, he said, adding, “so what is there to investigate?”

In any combat situation, he insisted, “There are instances of friendly fire, where soldiers mistakenly kill their own, and operational mistakes are bound to happen when fighting terrorists who dress like civilians.”

Some have speculated that the investigation is a warning to the incoming Israeli government of Prime Minister-designate Benjamin Netanyahu, but Gilboa said this scenario was unlikely.

“The United States has the right to say it won’t work with [Netanyahu coalition partner MK Itamar] Ben-Gvir due to his previous ties to [outlawed Israeli-American rabbi and politician Meir] Kahane, each side has the right to determine its level of cooperation. But beyond that, I doubt the FBI investigation is about this. Most likely, this was a decision taken at the intermediate level in the organization,” he assessed.

Gantz and his U.S. counterpart, U.S. Gen. (ret.) Lloyd Austin, are “the best that has existed between American and Israeli defense ministers, because these are two generals speaking the same language,” said Gilboa. “Gantz should seek Austin’s help to deal with the FBI.”