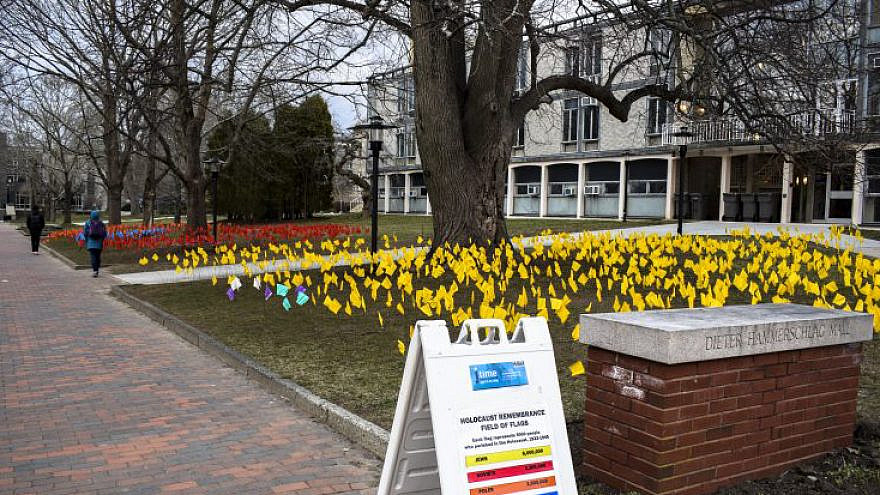 The "Field of Flags" memorial in 2019 at the University of Rhode Island. Credit: Hillel URI.
Spread the word.
Help JNS grow!
Share now:

(April 6, 2021 / JNS) Hillel at the University of Rhode Island has created its annual “Field of Flags” memorial in honor of  Yom Hashoah, or Holocaust Remembrance Day, which begins on Wednesday night.

The exhibit is set up on the Hammershlag Mall, a walkway between the Multicultural Student Services Center and the Carothers Library, on the university’s Kingston Campus. The flags were planted on Monday and will remain in place until April 12.

The university’s Hillel has planted the “Field of Flags” in memory of Holocaust victims every year since 2006.

Each of the 2,400 flags in the exhibit signifies 5,000 people—representing 11 million in total—who perished in the Holocaust. Jews are represented by yellow flags; Soviets, Poles, the disabled, homosexuals and other groups who were targeted by the Nazi regime are represented by red, orange, white, purple, blue and green flags.

“The display is a striking visual reminder for the university community of the Holocaust while underscoring the need to remain vigilant in the face of present-day hatred and discrimination,” said the university’s department of external relations and communications.

Hillel will also host several online events as part of the commemoration of Yom Hashoah.