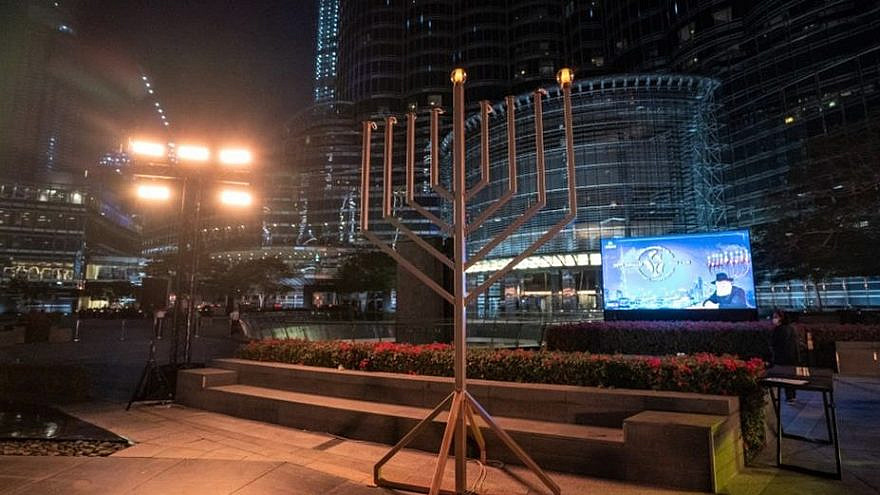 (December 11, 2020 / Chabad.org/News) For the first time in history, a giant public menorah has been raised in the United Arab Emirates. The 12-foot metal menorah was designed and constructed locally and stands at the foot of the Burj Khalifa, the tallest building in the world, for all eight nights of Hanukkah.

“The menorah is an age-old symbol of religious tolerance and a beacon of hope for all of humanity,” says Rabbi Levi Duchman, director of Chabad-Lubavitch of the UAE and the country’s rabbi since arriving in 2015. “There is no more appropriate sign of the respect the Jewish community of the UAE has received here, as well as this country’s spirit of coexistence, than the menorah, so this is exciting for all of us here.”

The desert country has in recent decades transformed from a sleepy backwater into a sleek metropolis, with gleaming new towers, glass malls and a string of artificial islands (including the world’s largest) rising from the turquoise waters. Gaining inspiration from the modern marvels that surround them, the UAE’s Jewish community is planning nightly Hanukkah concerts and celebrations, each evening topped off with the lighting of their new menorah. Some 500 Jews—both locals and tourists alike—are expected to join the celebrations each night, which will take place at the Armani Hotel adjacent to the Burj.

The pace of growth of Jewish life in the UAE has multiplied since the Sept. 15 signing of the historic Abraham Accords normalization agreement between the Emirates and Israel as part of U.S.-brokered negotiations. It has also allowed for an immediate influx of Israeli tourists, expected to hit 40,000 travelers by the end of the year. The agreement has likewise made it simpler for Duchman to bring in Jewish entertainment: Israeli singers Yishai Lapidot, Moshe Louk, Chaim Yisrael and Ruli Dikman are headlining the string of Hanukkah concerts. 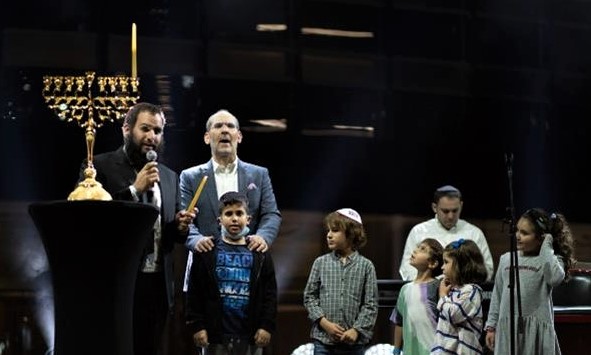 Each night of Hanukkah will feature a holiday concert, where, on the first night, Rabbi Duchman lit a smaller menorah, joined by singer Yishai Lapidot. (Credit: Yehuda Lavi/JCC of the UAE on Chabad.org/News)

The events will be held under the auspices of the Jewish Community Center (JCC) of the UAE, led by Duchman and hosted at the Armani Hotel’s glatt-kosher KAF restaurant. As the “Festival of Lights” approaches, they have been actively preparing to serve guests.

Perhaps most exciting for the fledgling Jewish community is news that this Hanukkah, they’ll be joined by the newest Chabad couple, Israeli-born Rabbi Levi and Nechamy Levitin, who Duchman has appointed to work with the exploding number of Israelis. 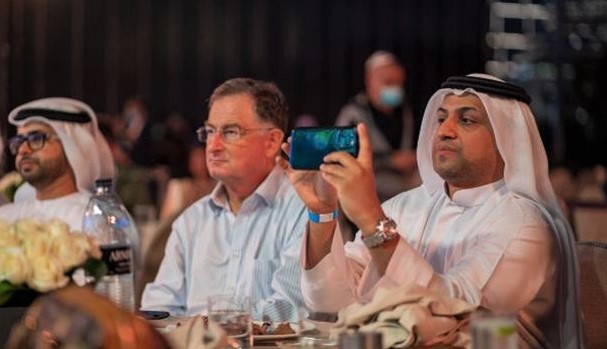 The expansion of Jewish life in the UAE comes in the wake of the Sept. 15 signing of the Abraham Accords. (Credit: Yehuda Lavi/JCC of the UAE on Chabad.org/News)

“My wife and I are excited to join this amazing community,” says Rabbi Levitin. “Our goal is to help the light of Hanukkah extend throughout the year.”

They already have their hands full: Chabad of the UAE has imported 2,000 menorah and candle kits to be distributed to any Jew who does not have a menorah of their own. Aside from the concerts, Hanukkah events are taking place in both Dubai and Abu Dhabi, including a holiday program for the children and parents of the country’s Talmud Torah, which was established in 2016 and is the UAE’s only Jewish educational institution.

“I am moved that my daughter Sara will experience a true Hanukkah here in the UAE,” says Emilie, a Talmud Torah parent. “For her to be able to grow up in the desert with such Jewish pride is a modern-day miracle.”