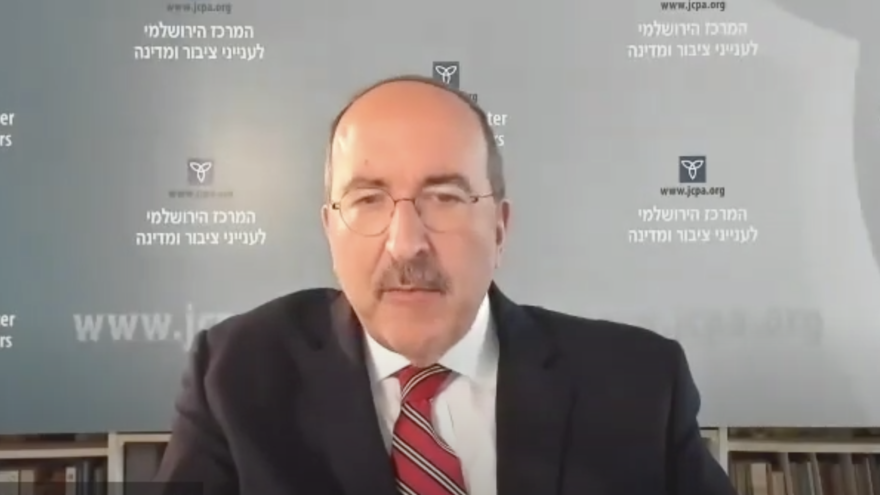 At least this is what U.S. President Joe Biden told Israeli President Reuven Rivlin during his visit to the White House on Monday. Biden also reportedly said Israel has the right to decide how to proceed with Iran. This message was meant to assuage Israel’s fears over the U.S. approach to preventing Iran from obtaining nuclear weapons.

But Iran’s recent announcement that it has started enriching uranium at 60 percent, and Tehran’s continued use of proxies to spread terror and instability throughout the region, leaves Israel worried that the U.S., as well as the other members of the P5+1 who are currently negotiating with Iran in Vienna, are not doing enough.

According to Dore Gold, president of the Jerusalem Center for Public Affairs (JCPA) and Israel’s former ambassador to the United Nations, while the threat of Iran obtaining nuclear weapons is considered the most dangerous threat associated with the Islamic Republic, it is also the least likely element of the Iranian arsenal to be used in the near future. Instead, Gold believes it is Iran’s proxies that represent the greatest threat today.

“Many people anticipated in 2015 the proxy problem would diminish,” he said, referring to the Joint Comprehensive Plan of Action, the formal name for the Iran nuclear deal. “But after the deal was concluded, the problem of proxies mushroomed across the Middle East.”

Gold noted that the Iranian proxy issue is a central threat that was ignored in the 2015 nuclear talks and now again in the current talks in Vienna.

Iran’s pursuit to become a “nuclear threshold” state presents the international community with a new reality and could be part of Tehran’s efforts to gain more concessions from the West during talks of returning to the nuclear deal, experts say.

Kirsten Fontenrose, director of the Scowcroft Middle East Security Initiative at the Atlantic Council, said she does not believe Iran intends to acquire a bomb in the near future, but rather that this is a pressure tactic.

“In Vienna, the sticking point is on sanctions, proxies and missiles,” she said, referring to the ongoing nuclear negotiations.

“The Biden administration is insisting that the Iran regime be willing to engage in future talks on their use of proxies and missiles, but Iran has said ‘absolutely not,’” she added. “This is a red line for them….Iran wants to protect its proxies and missiles, the pillars of its foreign policy, which it believes are more important.”

According to Gold, the issue of Iranian Shi’ite militias spreading across the Middle East threatens regional stability no less than Iran’s threat as a nuclear-threshold state.

“I am not sure Western allies are prepared to deal with it,” he said, warning that there is “a very dangerous Middle East on the horizon if the west and the negotiators allow the proxy issue to expand and not be addressed.”

Gold explained that the malign activities of Iranian proxies across the Middle East “are a reflection of Iran’s quest for regional hegemony.” He also said he believes Iran is “on a roll” to try and place as many of these countries as possible under its yoke, and that it will require cooperation with Israel and determination from the West to make clear to Iran it cannot pursue its quest for hegemony.

Yosef Kuperwasser, senior project manager on regional affairs at the JCPA and former director general of the Israel Ministry of Strategic Affairs, said Iran wants to be “a regional superpower and eventually a global superpower. This is why Iran does not want to be a nuclear threshold country; it wants to have nuclear weapons.”

Kuperwasser said that if Iran crosses the nuclear threshold, its proxy forces in the Middle East “will feel much more comfortable increasing their activities with the nuclear backbone of Tehran and will work harder to spread Iran’s ideology throughout the Middle East and the world.” He stressed that the international community must work together to deter Iran from pursuing nuclear weapons and from moving forward with its hegemonic plans.

“Our first address should be the Europeans,” he said, adding it makes no sense that the Europeans want to appease Iran. “The Europeans dance to the Iranian flute and ignore the Arabs.”

He said that Israel “cannot put its security in the hands of the U.S.” and instead must be able to “defend ourselves by ourselves.” He suggested the Iranians bear in mind that “the military option is on the table.”

Gold emphasized the need for the negotiators in Vienna to address the proxy issue.

“My concern is that the Iranian expansion will not stop in Gaza, Yemen, Syria and Lebanon, but will also reach the eastern border of Israel — Jordan,” he said. “Iran keeps pushing the limits… The West must touch on this issue as well.”

Gold reiterated that Israel “will not live with a nuclear Iran” because its national security doctrine “does not tolerate this.” Returning to his central message, he said that the focus when it comes to combating Iranian aggression must also be placed on the “lesser, but more highly probable threats, like the proxies, missiles and drones,” which are “becoming a new part of the strategic landscape that we have to address.”