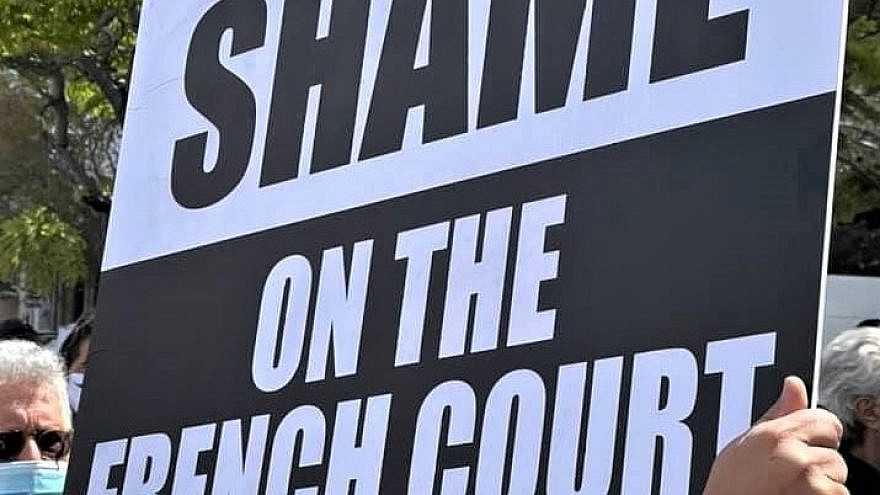 A sign at a rally in Paris against the French court ruling in the Sarah Halimi case, April 25, 2021. Source: Facebook.
Spread the word.
Help JNS grow!
Share now:

Dupond-Moretti said on Sunday that the bill will fill the “juridical void” that currently makes it impossible to “take account of the voluntary intake of toxic substances” that leads to delirium at the time of a crime, The New York Times reported. The proposed bill will ultimately prevent intoxication from being used as the foundation for an insanity plea. It will be presented in time for a Parliament vote this summer, he said.

France’s highest court ruled this month that Kobili Traoré, who killed his neighbor—65-year-old Halimi—by beating her before throwing her out the window of her Paris apartment as he shouted in Arabic Allahu Akbar (“God is great”), was determined not to be tried for his crime because he had no “discernment or control” over his acts due to a “delirious fit” he was in, brought on by his use of cannabis.

The ruling upheld a lower court’s insanity verdict in January of last year, with preliminary hearings and in July 2018 and July 2019 alluding to much of the same. Traoré, now 32, has admitted the murder and is currently in a psychiatric institution.

The high court’s verdict sparked local and international outrage. It led to a large demonstration of more than 20,000 people in Paris on Sunday, with smaller ones in other French cities and major cities around the world, including Tel Aviv.

French President Emmanuel Macron denounced the court’s ruling in an interview with Le Figaro, saying, “Deciding to take drugs and then ‘becoming mad’ should not in my eyes remove your criminal responsibility.”