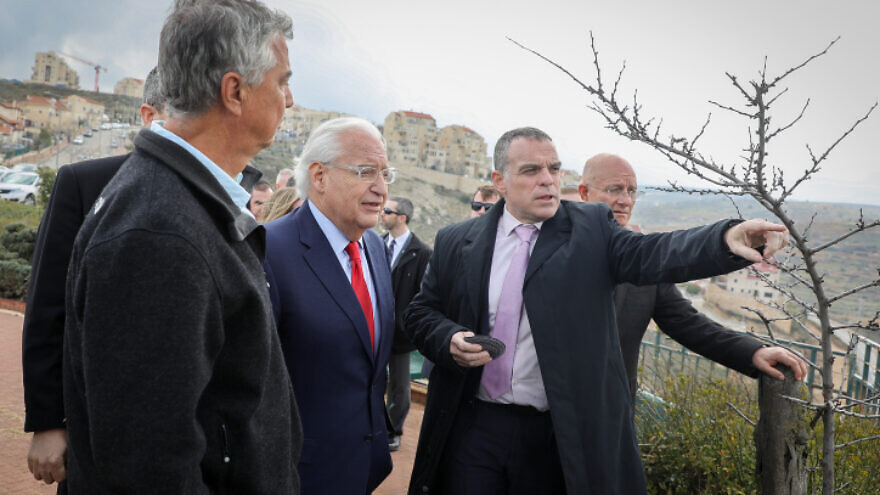 U.S. Ambassador to Israel David Friedman with Efrat regional council head Oded Revivi, and the heads of local councils in Judea and Samaria, during a visit to Efrat on Feb. 20, 2020. Photo by Gershon Elinson/Flash90.
Spread the word.
Help JNS grow!
Share now:

(May 6, 2020 / Israel Hayom) The United States is ready to recognize Israeli sovereignty over the Jordan Valley and Israeli settlements in Judea and Samaria in the coming weeks, U.S. Ambassador to Israel David Friedman said on Tuesday.

In a special interview with Israel Hayom on the occasion of the two-year anniversary of the relocation of the U.S. Embassy from Tel Aviv to Jerusalem, Friedman explained that several processes must be completed prior to this move, the timetable for which he said depended mainly on Israel. He emphasized that Washington does not plan to impose any new conditions for the move.

According to the ambassador, when the process of mapping the area is completed, the Israeli government agrees to halt settlement construction in the part of Area C that will be excluded from the annexation plan and Israeli Prime Minister Benjamin Netanyahu agrees to negotiate with the Palestinians on the basis of the Trump administration’s Middle East peace plan—which he already has—the United States will recognize Israel’s sovereignty in areas outlined in the plan.

Friedman stressed that the key element is that Israel has to be the one to make the move. It’s not the United States that is declaring sovereignty but the Israeli government, he said, and once it does the United States is ready to recognize it.

As for whether the Trump administration will push Israel to recognize a Palestinian state, Friedman said that the only condition with regard to this issue is that the prime minister—regardless of who that may be—agrees to negotiate with the Palestinians in good faith for four years.

He further acknowledged that Netanyahu has given his consent to this condition and that it is the Palestinians who have rejected the idea.

Under the U.S. plan, while at this time the Palestinian refuse to negotiate with Israel, if for example they agree in two years’ time to do so, the prime minister will be obliged to resume talks, he explained. As this condition was set for a limited period, the United States wants to keep the option on the table for four years, said Friedman.

But what about the moratorium on settlement construction? According to Friedman, this stipulation would be relevant only to secluded settlements and would apply to expansion of their territorial footprint only, not all construction.

Once Israel applies its law to the area, the absolute majority of settlers, some 400,000 people, will continue living their lives as usual, with construction taking place according to the existing laws that apply to communities within the Green Line. About 10,000 to 15,000 of them will be unable to expand their communities’ area, but will still be able to build up, he explained.

The ambassador added that places like Beit El and Hebron are the historical heart of Judea and Samaria, noting that many Israelis have told him they have no interest in handing them over to the Palestinians as part of a peace agreement.

“The administration knows that, just as Americans would never relinquish the area on which the Statue of Liberty stands, even though it’s a very small area, Israel would never agree to give up these places,” he said.

Friedman said he has come to learn that Israelis from all walks of life believe that the plan presented by the Trump administration is the best plan for Israel.