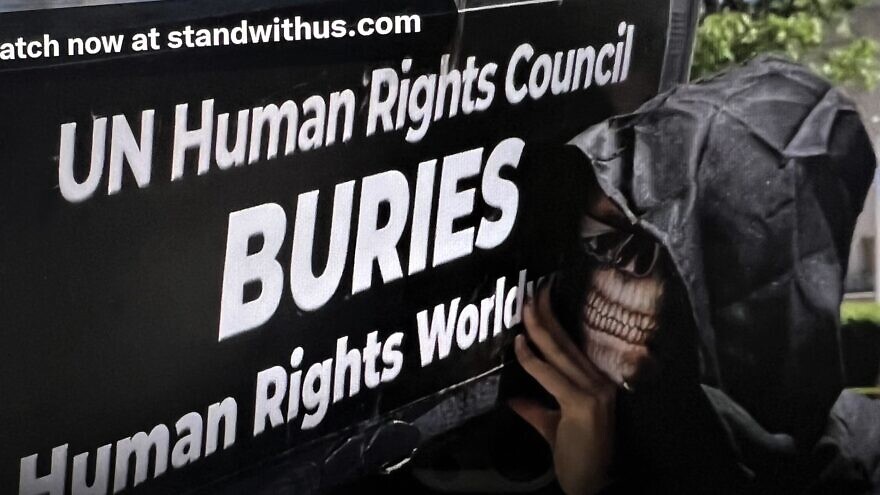 Death is the point, according to pro-Israel advocacy group StandWithUs, which arranged and filmed the processional outside of the U.N. headquarters as a funeral for human rights. It did so to point out how Israel has been targeted unfairly by the United Nations as part of a sustained, vindictive agenda.

“Human-rights abuses are being completely ignored around the world—China, Mauritania—serious abuses. The behavior of the U.N. represents death because they are ignoring human rights and obsessing on Israel,” StandWithUs CEO Roz Rothstein told JNS.

She stated that the impetus for the film and a coordinated petition campaign was the U.N. Human Rights Council-sponsored Commission of Inquiry.

Calling it a “kangaroo court,” said Rothstein. “Essentially, it is a campaign between Amnesty International, Human Rights Watch and the United Nations to make sure Israel is castigated in a variety of ways, and to blame only Israel for a lack of peace. Meanwhile, everything else around the world gets ignored except this commission.”

The film, which runs about a minute-and-a-half, was shot back in early May.

The video also includes images of various alleged human-rights abuses around the world, accompanied by graphics noting the Human Rights Council’s membership, which is populated by some of the world’s worst violators of human rights.