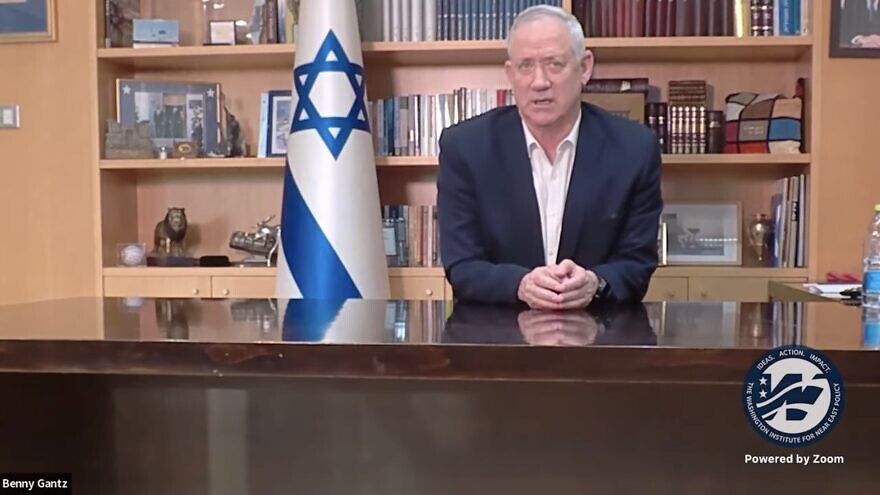 (April 12, 2022 / JNS) In a broad interview hosted by the Washington Institute (TWI), Israeli Defense Minister Benny Gantz said that Israel is taking an approach that it hopes would strengthen Palestinian society to avoid violence.

In an hourlong virtual conversation with TWI executive director Robert Satloff on Monday, Gantz also spoke about the recent terrorist attacks in Israel and how his department was working to prevent escalation into a wider conflict almost a year after “Operation Guardian of the Walls” last May, where Israel had to defend itself against more than 4,000 rockets launched by Hamas in the Gaza Strip at civilian population centers.

Right now, he said, the situation is quiet, but that could change on a day-to-day basis.

Further economic cooperation is also being pursued with the Palestinian Authority in Judea and Samaria, including the strengthening of operational ties between all levels of the government.

“My policy is to ensure our security while investing in the future,” said Gantz. While these measures benefit the Palestinians, it helps Israelis, too, he said, “making sure that Israel gets to stay a Jewish and democratic state.”

With 14 people killed in terrorist attacks in the past few weeks, Gantz said that Israeli security forces are employing numerous intelligence resources to be as accurate as possible to intercept those “who need to be intercepted” and have prevented dozens of potential attacks.

He said it was encouraging that many in the Arab world have censured the attacks, including the mayor of one of the home cities of one attacker who, he said, condemned it even more forcefully than he could.

He attended an Iftar dinner on Saturday with Muslims in the city of Tayibe, who were against the attacks. “Ramadan should be a time of worship and spending time with families, and I believe, really believe, that most Palestinian and Israeli Muslim citizens want to celebrate the holiday as such,” said Gantz.

While many in the P.A. condemned the attacks, he conceded that some did express support, which he said hurt both Palestinians and Israelis.

“I hope to see concrete action by the Palestinian Authority,” said Gantz. “We obviously won’t be waiting for them, but we will try to maintain communications with them as much as possible.”

“I’m assured that we will beat this terror with our powerful security forces, by the resilience of our nation and people and by the balance between … operational determination and responsible policy as much as I can,” he said.

While the threat of wide-scale violence similar to last year exists and can escalate at any moment, the current government has changed certain tactics to mitigate this possibility.

Instead of having only troops at the Gates of Nablus, they’ve opened small shops so people can come and enjoy the place, he said. The government has allowed people older than 50 to come to pray without needing permits, and if everything remains peaceful, that age will be dropped to 45.

Other issues that could fuel violence, like evictions in the Sheikh Jarrah neighborhood, have been resolved by the courts.

Satloff said that during previous terrorist attacks, the government’s policy had been to approve settlement projects that were in the pipeline and asked Gantz if that was going to continue.

Gantz replied that approval has already come for 1,000 houses for Israelis and Palestinians with the goal of allowing both sides to live life normally, calling it a totally different approach.

Other confidence-building measures include allowing factories, such as those in Nablus, to make products under Israeli criteria that can be sold in Israel directly.

The better the economic situation is in Palestinian-controlled territories, said Gantz, the better the security for all.

“We are telling the Palestinians, when it is quiet, you will enjoy economic fellowship,” he said.

This includes those from the Gaza Strip, with Gantz saying that the number of workers who come to Israel from there could increase if things remain peaceful. The alternative—military action—is easy for Israel to fall back to if needed, he added.

Gantz opened the interview with a statement that spoke to Israel’s warming relations with its Arab neighbors, including those that are part of the Abraham Accords, as well as others with which Israel has no treaties.

He called Iran a threat not only to Israel but to the world, and that the world must look at it as such. A potential agreement between the United States and Iran to rejoin the Joint Comprehensive Plan of Action, he said, would give Iran lots of funding to continue having a negative impact in the region.

If there is an agreement, the loopholes have to be filled, such as those of the expiring sunset provisions, ballistic missiles and not granting sanctions relief to the Islamic Revolutionary Guard Corps. And if there is no agreement, then a “Plan B” should be activated by the international community, not unlike what has been employed against Russia for its attack on Ukraine. These options should include coordinated economic pressure, intelligence cooperation, diplomatic pressure, power projection and counter-terrorism efforts.