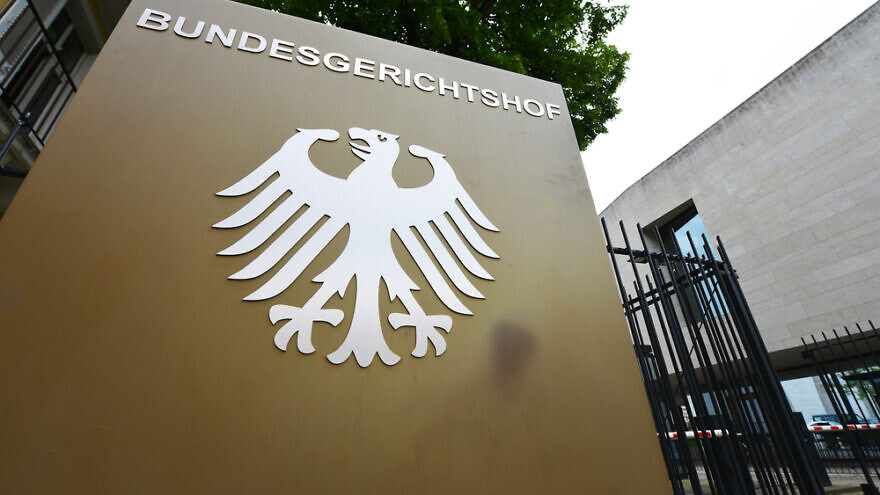 The entrance to the Bundesgerichtshof, the Federal Court of Justice in Karlsruhe, Germany, the highest court in Germany. Credit: Shutterstock.
Spread the word.
Help JNS grow!
Share now:

(August 11, 2021 / JNS) Prosecutors in Germany are getting ready to bring forward more than a dozen legal cases against elderly men and women for their alleged work at Nazi concentration camps during the Holocaust.

Prosecutors confirmed last week that a 100-year-old man is deemed fit to stand trial in October for serving as a guard at the Sachsenhausen concentration camp and for his alleged complicity in the killings of more than 3,500 people between 1942 and 1945. The man, whose name was not released, was also allegedly involved in the shooting of Soviet prisoners of war and helped kill others with the poison gas Zyklon B, according to JTA.

Irmgard Furchner, a 96-year-old woman, will also face trial this year for her alleged work as a secretary in the Stutthof concentration camp in Nazi-occupied Poland, according to The Washington Post. She will be tried at a juvenile court because she was a teenager at the time of the crime.

At the same time, nine investigations are underway with six more preliminary probes against elderly suspects, according to Thomas Will, head of the Central Office for the Investigation of National Socialist Crimes. In almost every case, the charge is for being an accessory to murder by working at a death camp.

There is no statute of limitations for murder and accessory to murder in Germany.

“The passage of time is no barrier to justice when it comes to the heinous crimes of the Holocaust, and it is right that even now, the German authorities are pursuing cases relating to these dark acts,” said Karen Pollock, chief executive of the Holocaust Education Trust. “We hope that these trials will help to ensure that the truth of the past is known, especially for the next generation, as well as bringing some comfort to the survivors who are still with us.”